Ann Arbor — LGBTQ-affirming Out Loud Chorus kicked off its 25th anniversary season at Towsley Auditorium on Jan. 17 and 18 with accolades and commendations from numerous government officials. Ann Arbor Mayor Christopher Taylor presented OLC Vice President Cinda Hocking with a proclamation naming Jan. 17, 2020, as Out Loud Chorus Day. In this proclamation, OLC is recognized for its contribution as an LGBTQ chorus and the music experiences it has provided to Ann Arbor and surrounding areas.

“It is a great honor to receive government recognition and commendation,” Hocking said. “We are so grateful and impressed that these leaders took the time and effort to understand, support and share in our mission.” 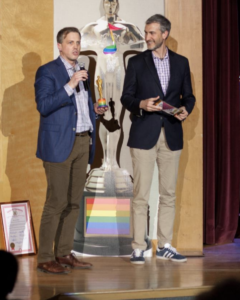 On Jan. 18, Out Loud Chorus was honored in a State of Michigan Tribute presented by State. Rep. Yousef Rabhi. Washtenaw County Commissioner Jason Morgan presented additional accolades from Sen. Gary Peters and Congresswoman Debbie Dingell. Dingell entered a letter into the Congressional Record honoring OLC as “an indispensable asset to our diverse and vibrant community.”

Sen. Peters’ letter welcomed the audience to the concert and called out “Artistic Director Darin DeWeese for dedicating his time, talent and hard work to ensure the success and endurance of the group.”

“It is truly an honor to serve at the helm of an organization that not only creates an affirming space for members of our community to gather and make music,” DeWeese said. “But also an organization that plays an active role in supporting and giving back to our brothers and sisters of the wider LGBTQ+ community!”

OLC President Annie Withers said, “It is such an honor and privilege to be recognized for doing what most of us just love doing: singing and making good music with friends. That we are also able to be a place in community that seeks to be inclusive, welcoming and affirming to those in the LGBTQ+ [community] and our allies is a testament to our success in our goal to decreasing discrimination through education.”

Out Loud Chorus is a non-auditioned, LGBTQ community chorus in Washtenaw County founded in 1995 comprised of more than 80 members. OLC is sponsored in part by the Michigan Council for Arts and Cultural Affairs and the National Endowment for the Arts. For more information please contact OLC at 734.265.0740 or [email protected]