OutFront Kalamazoo (OFK) has hired Cristina B. Suárez-Ross to be the center’s new director of homeless youth programs. This comes just as OFK is preparing to open its first transitional living facility, Legacy House. The three-bedroom home in the Vine neighborhood of Kalamazoo will house between six to eight young adults ages 18-24 and provide a live-in staff person who will be onsite at all times.

“No child should ever be kicked out of their home because they identify as LGBTQ+,” Suárez-Ross told Pride Source at the end of her first week on the job. “Yet it does very much still happen, and my goal is to ensure that if that occurs, they have a safe, accepting place to land.”

Suárez-Ross will oversee two specific projects, the center’s Host Homes program and Legacy House. Host Homes involves partnering with families in the community who are willing to open their homes to an LGBTQ+ youth who has been forced into homelessness by their family’s unwillingness to accept them.

“Those families go through training to prepare to host the LGBTQ+ youth and act as a support system while the youth attends school, work, etcetera, as well as involve that youth in their everyday lives and act as family to that person,” Suárez-Ross said.

Legacy House, meanwhile, will provide transitional living, where individuals will live together while they work, learn independent living skills and work toward achieving independence. While living in the house, residents will receive wraparound services from OutFront and its community partners.

“The need for transitional housing is nationwide,” she said. “We have a lot of folks who are chronically homeless in the LGBTQ+ community. [Legacy House] fits a population that needs some longer-term housing to kind of break the cycle of chronic homelessness. We’ll have services that will help set our residents up to succeed.”

Hunter said that statistics show 40 percent of homeless youth identify as LGBTQ+. A large contributing factor to the problem are the religious beliefs some parents still hold.

“There’s a lot of religious opposition to LGBTQ+ folks. We find that people end up in families where the parents just don’t understand and are not willing to learn. So, we end up with kids who are tossed out of the house or whatever at a fairly young age.”

“We have a large population of homeless LGBTQ+ people in our area,” Gheen said. “The need for housing has been ongoing for many years. Some of the shelters in our area are not as welcoming to the LGBTQ+ community, unfortunately. Thus, our transitional housing is much needed.”

“Grace is correct about there being a big need for something like this in our area,” she said. “I attribute that to a couple of things, but I think the overriding issue continues to be ignorance and a lack of understanding, manifesting as a dearth of attention and energy for these issues.” 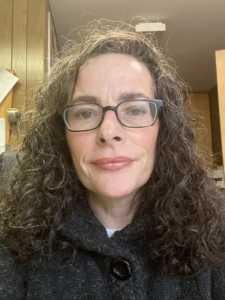 Organizing, said Suárez-Ross, is critical to tackling these issues.

“I think organizing to address these things — educating the general public and then specifically targeting groups who might benefit from further education and information — in a more comprehensive way is critical. At OutFront, we collaborate with various community partners in order to further educate and involve our community.”

Suárez-Ross said her new position is “the culmination of all the work I’ve done in the field of social work, including working with youth who have behavioral and emotional issues, substance abuse, trauma, and those who have abused and neglected.

“In all of those areas, my work included LGBTQ+ youth and I quickly came to see what a hugely underserved population that is,” Suárez-Ross, who identifies as an ally, continued. “The director of homeless youth programs position allows me to focus on growing the availability of quality services for the LGBTQ+ youth population in our community.” Hunter said she expects Legacy House to start housing residents by late spring or early summer.

The road to see the project to completion and get the house open has not been without obstacles.

“It was quite a challenge to find a house that was zoned the right way and that we could use for transitional housing,” she said. “It’s really been a community-wide project.”

So near now to the finish line, Hunter beams when she talks about the project.

“I’m very excited to be this close. I can hardly believe that we actually own this piece of property and will be able to use it for what it’s designed for, to put a dent in the homeless epidemic for LGBTQ+ youth. It’s very exciting. We’re about to start taking applicants and get the rest of the things done that need to be done to the house and get it open.”

But, as she said, one house will merely make a dent in the program. Does Hunter see a Legacy House II materializing someday in the future?

“I think we need to get this house up and operating and see how things go. Nip and tuck the program to get it working smoothly and then we’ll go from there.

“It’s not out of the question, though, that we could find another property at some point,” she continued. “But it’s not on the near horizon for us. We’ve got to get this one up and running efficiently first.”

The Coordinated Assessment Model (CAM) is a systematic approach to homelessness in Detroit, Highland Park and Hamtramck that focuses on aligning the needs of individuals and families experiencing homelessness or at imminent risk of becoming homeless to available shelter and housing resources.

The mission of Alternative for Girls (AFG) in Detroit is to help homeless and high-risk girls and young women avoid violence, teen pregnancy and exploitation, and to help them explore and access the support, resources and opportunities available to them. AFG can help with shelter for young women ages 15-22, prevention and outreach.

The Drop-In Center in Highland Park is a safe place for LGBTQ+ young people ages 13-30 to simply be themselves and have a space to hang out with one another. At the Center, you’ll have access to hot dinners, food to go, safer sex supplies, computer lab, free laundry, peer support groups, dance floor, help with applications and resumes and more. The Center can also help connect you with the Ruth Ellis Health & Wellness Center and emergency shelter. Call 313-252-1950.

National Coalition for the Homeless

The National Coalition for the Homeless is a national network of people who are currently experiencing or who have experienced homelessness, activists and advocates, community-based and faith-based service providers, and others committed to a single mission: To end and prevent homelessness while ensuring the immediate needs of those experiencing homelessness are met and their civil rights are respected and protected. Call 202-462-4822.

The National Runaway Safeline is a hotline available 24/7. There is always someone available to listen and offer confidential, non-directive and non-judgemental support. Call 800-RUNAWAY.