There still aren’t enough trans actors in Hollywood, but at least there’s Patti Harrison. Harrison is currently starring in the big blockbuster rom-com caper “The Lost City,” alongside Sandra Bullock and Channing Tatum, as the social media manager of Bullock’s character, Loretta Sage, a romance-adventure novelist. In the movie, Harrison’s Allison thinks that to help Loretta appeal to a younger demo, it’s just a matter of hashtagging Shawn Mendes’ name at the end of every tweet.

As for Harrison, her name rose to even greater prominence in 2021 when she voiced Chief of Tale in “Raya and the Dragon,” giving her the distinction of being the first openly trans actor to lend their voice to a Disney film. Last year, she also starred in “Together Together,” a moving comedy about a single man (Ed Helms) and his surrogate, played by Harrison, that premiered at Sundance. But “The Lost City” could really take her career to the next level given it’s a major studio film with major star power, which can only bring more attention to Harrison’s signature brand of comedy.

Harrison’s wry deadpanning was first introduced on primetime TV, when, in 2017 on “The Tonight Show Starring Jimmy Fallon,” the actor-comedian made wisecracks about then-President Donald Trump’s ban on trans people in the military. Harrison, who was born in Ohio and whose father is from Detroit, starred in a recurring role on Hulu’s “Shrill” in 2020, along with smaller roles in “Bob’s Burgers,” “Broad City” and “Search Party.”

During a recent Zoom interview with the actor, Harrison joked about what the movie might have been about when its working title was “The Lost City of D,” chimed in on her own interest in reading romance novels (and reading, period), and discussed how she feels about the “overcorrection” of queer people on TV.

When you got the script for this movie, originally titled “The Lost City of D,” what exactly did you think the D stood for?

I appreciate that the movie, even now that it’s called simply “The Lost City,” did still lean into the D, as there’s a couple dick jokes in it. 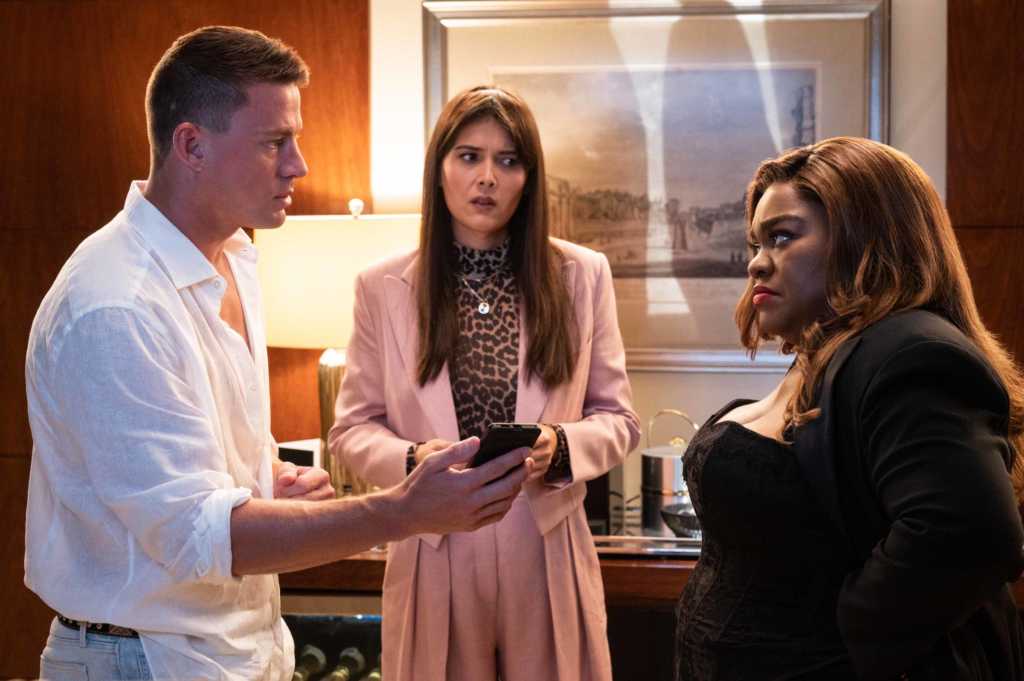 And those are all with just you, or you and Channing?

That’s a shame. Our society is just not ready for something as brave as that.

That movie will exist 20 years from now when we’ve made even more progress than we already have.

I love that Elle Fanning is your go-to.

I don’t know how we’re going to be serious now, but I do want to ask if you read any romance novels, queer or not, when you were growing up?

Not at all. I never read a lot, and I never really read outside of what was required of me for school. I don’t think I really… I’m learning. I used to feel really guilty about not reading books, specifically. I think there’s a culture around shaming people who don’t read books. I just don’t absorb information that way. A lot of the stories that I absorb are visual. So I love movies, video games and TV. Maybe that makes me stupid, but I watched a lot of romantic movies and TV shows. But as far as novels go, I think I remember reading “Tess of the d’Urbervilles” in school. I think that is, like, a rapey book. It opens with a sexual assault. That’s probably the only book that comes to mind, actually.

And then no more books for you after that. You just stopped reading.

What if the only book I’ve ever read was “Tess of the d’Urbervilles”? That’s the one book. I should be studied by science if that were the case.

What if there was a romance novel based on your life? What might it be called? And who would be your cover model for it?

Well, I did get asked this question earlier today, but I think it’s probably for a publication that wouldn’t use [my answer] and wouldn’t care what I said. Because my answer when asked what the title of my romance novel would be [was], “Oh, Is There Poop?” And I don’t think I would be on the cover of it, right? It would be my mom and my fourth grade teacher, who’s my mentor. And they’re just kind of doing a thumbs up through a foggy window. They’re standing outside of a window. And then you see the crest of someone’s butt.

There would be more explained in the book. I promise. 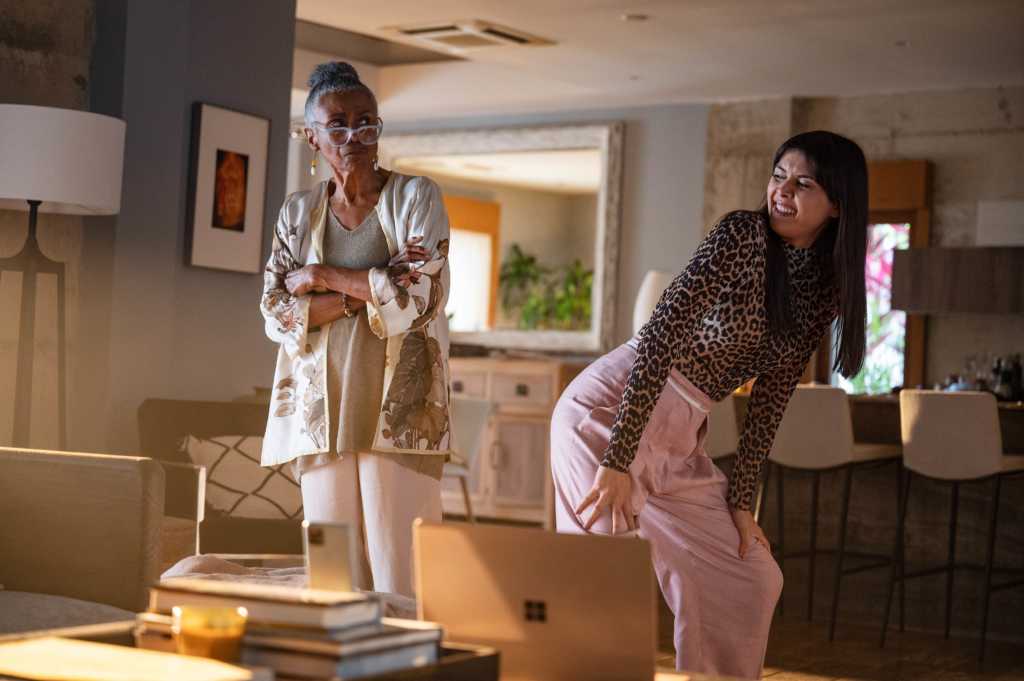 I definitely think there’s some irony there. I, every day, am waiting for my Instagram account to be deleted against my will. Probably for the best. But now Instagram’s terms and conditions have changed and they, like, auto go through and will flag photos. Maybe once a week, I get a new photo flagged. And it’s always a post from, like, 2013. And it’ll be a photo of me being like, “I love this bitch,” and it’ll be me and my friend. And then it’ll be flagged for bullying and harassment, ’cause I called my friend a bitch. And I was like, “Well, that’s my whole Instagram page, me being like, ‘Love this stupid, ugly fucking slut.’ I guess if that’s bullying and harassment, then I’m not fated for Instagram anymore.

I think social media has had a big part in my career success, which has been great. I also think social media has evolved. So the version of it we have now is mainly a shopping platform. So I don’t think social media is intrinsically bad, but I think we’ve made it bad ’cause it’s corporatized. But I don’t remember exactly why Adam [Nee, who co-directed and co-wrote the screenplay], Aaron [Nee, Adam’s brother, who co-directed) or Sandy [Bullock] said they specifically wanted me for the part other than they saw me and thought I was funny. In other things I’ve been cast in, it’s usually ’cause of stupid videos or something I made on Instagram.

Or maybe it was “Together Together,” which was one of my favorite movies of last year. How major did it feel to be part of a film where you, a trans actress, is playing a surrogate? There was a lot of conversation around that and how I’m not even sure that that’s ever happened before in a movie. It all felt pretty groundbreakingly important casting-wise.

Yeah. I mean, I think I definitely thought about what that meant and the optics of it. I had so many conversations with [writer-director] Nikole [Beckwith] about if it was stunt casting or whatever. But it really did feel like something I just never thought I was going to get to do, and I tried not to overload it in playing the role, like bring too much of that into it.

I think what was really nice is that Nikole was so present in making sure I felt prepared and knew what was going on in each scene, like where my character was in her pregnancy. I think it helped me get out of my head and not think about the politics of what it means. You know, my whole thing when we were filming was, “Oh my gosh. Are people going to be staring at my Adam’s apple? Is this something that I’m going to deal with? A level of TERF scrutiny or something that would be really emotionally painful to endure?” But, ultimately, it’s been an incredible gift in my life. The only thing that I’ll ever earnestly talk about is that movie because it just felt so special.

As a queer person, I try not to overthink the optics. But oftentimes, it’s hard for me not to, just because I’m always looking for us to be represented and be visible.

Yeah. Speaking of social media, I feel like there is on overcorrection or overemphasis with development and TV, like stumbling over themselves to be inclusive in a way that I think can sometimes be minimizing to the creator or the artist or writer, whoever’s trying to make a project, if that person is marginalized in any way.

And if that marginalization is queer, then in an ideal world, that person could just make whatever they want. I think what’s stressful about it is that people who aren’t queer, who aren’t marginalized, and who are in these gatekeeping positions, are trying to figure out a way to capitalize on queerness or the more mainstream interest in it and it can feel very minimizing when the only stories they want to tell or they want to see from you as queer person is stuff about being queer. It’s like, my sense of humor as a comedian has really been not about that, but it has kind of pivoted into that. I’m approached about being trans so much that it’s made me a little resentful. I’m like, “Oh, I see comedians who are peripheral to me who aren’t queer, and they can make a TV show about whatever they want.” But when I take a meeting, it’s like, they don’t want to hear my idea about, you know, Elle Fanning with dildos. They want to hear about a biopic about me coming out to my mom and her struggling with it.

On that note, it’s nice to see you and Bowen Yang in “The Lost City,” where you can both just be funny.

Yeah. Bowen shot the last week I was there pretty much, and it was the perfect little ending to the trip. We had, like, golf carts where we were staying. It was so much fun. I wish he would have been there the whole time. It made me want to work with him on something.

Yeah. Where we have unsimulated sex. A lot of penetration, me and Bowen. Really close friends just, like, really screwing for art. That’s representation.