House Minority Leader Nancy Pelosi is the embodiment of the feminist adage “the personal is political.” She celebrated part of her 78th birthday at an LGBT equality weekend in Palm Springs, which she declared a “fabulous” fundraiser for the Democratic effort to “take away” the House from the Republicans in the November midterm elections.

Pelosi is so confident of victory, she told the Los Angeles Blade that she would appoint out Rep. Mark Takano as the next chair of the House Veterans Affairs Committee. Naming names for leadership positions has rankled some Democrats who do not want Pelosi to assume she will be re-elected House Speaker. But with her track record as a strategic political thinker and vote-counter, a prolific fundraiser and one of the most recognizable leaders of the opposition to President Donald Trump and the conservative Republicans who bow his way, Pelosi is frank and assured.

“‘We will win. I will run for speaker. I feel confident about it. And my members do, too,” the Boston Globe reported May 2 on Pelosi’s meeting with the Globe’s editorial staff. “It’s important that it not be five white guys at the table, no offense,” referring to the president meeting with the top two leaders from the House and Senate. “I have no intention of walking away from that table.”

Pelosi’s track record includes passage of the profound change in healthcare. “The White House played a major role in getting the votes for ObamaCare, but it couldn’t have passed without Pelosi,” The Hill reported in February 2016. “Former White House deputy chief of staff Nancy-Ann DeParle called her ‘a force of nature’ in convincing Democratic members to vote yes.”

After the Affordable Care Act narrowly passed on March 21, 2010, Pelosi noted that women would no longer be charged more because of their gender—women were no longer a pre-existing condition. But the year before, she also predicted “fire and brimstone” and “shock and awe” from across the aisle. “They’re coming after us,” Pelosi told House Democrats in 2009.

Many of the darts thrown at Pelosi over the years have been acid-tipped with LGBT-hatred. “One of the things the Republicans like to do around the country is to represent me as a LGBTQ first and foremost supporter. I represent San Francisco, which they caricaturize as being a gay haven and capitol. And that’s something we’re very proud of,” Pelosi told the Los Angeles Blade in a 30-minute interview on April 27. “But the fact is the country is going to leave them behind because people have a different level of respect because of the work the LGBTQ community has done in many areas to end discrimination and in the fight against HIV/AIDS.”

Pelosi says HIV/AIDS and passage of the Equality Act are top priorities. “The Equality Act is something that really should be appreciated in a very special way because it really is transformative,” Pelosi says. “It just changes everything. It says whether it’s credit or housing or job discrimination or you name it—you can no longer discriminate. Well, you shouldn’t discriminate to begin with. But it makes it a part of the Civil Rights Act to protect [LGBT] people.”

Pelosi notes that when Equality Act sponsor out Rep. David Cicilline introduced the Equality Act, civil rights icons stood beside him. “It’s a priority for us. A day doesn’t go by that we’re not speaking out against discrimination in the workplace and any other place,” she says. “And we would hope that we could do something with the Republicans on that between now and January—but we know in January, we’ll be able to go forth with an agenda that is not only proactive in what it does but also removes all doubt that we won’t have any of these other bills that enshrine discrimination in our laws.”

But first there’s an election to win. “We are going to be focusing on the economy in our debate,” she says. “That is what elections are about across the board. And the success that we have had in recruiting candidates and we have the A-Team on the field, the very terrible numbers of President Trump means that they have over 40 retirements. The mobilization has never been bigger. People see the urgency. They want to take responsibility and that gives us opportunity.” 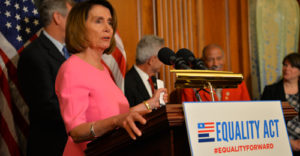 Leader Nancy Pelosi (D-Calif.) speaks at the reintroduction of the Equality Act at the U.S. Capitol on May 2, 2017. Photo by Michael Key, Washington Blade

While many of the energized youth are fans of Rep. Maxine Waters’ call for Trump’s impeachment, Pelosi thinks that is not a winning strategy. “Maxine and I go back well before we went to Congress. So count me as a Maxine fan. But I do say focusing on impeachment is a gift to the Republicans,” she says. “What we have to do is focus on the economic insecurity of American families and people. It’s about their apprehensions and their aspirations. And that’s what we need to be talking about.

“If there’s any movement to impeachment, it will have to come with data about what happened, vis a vis the law, and it will have to be bipartisan and we’re a long way from that,” Pelosi says.  “So I do not think that talking about impeachment as our message for the election is a winning formula. Should people talk about it if they believe in it—that’s up to them. But in terms of our unifying message, it’s about the economy— our better deal. We think the American people have gotten a raw deal from the Republicans. We have a better deal—better jobs, better pay, better future. And we’re very proud of that economic message. It’s a message of unity in our party. It’s a winning message and that’s how we’re going forward.”

While impeachment may not be a winning electoral strategy, the concern about the erosion of democracy is. Pelosi says she was pleased to see some senators challenge new Sec. of State Pompeo during his confirmation hearing, pointing out that some of his negative LGBT public policy views “are not the views of the United States.”

But, Pelosi notes with more than a hint of dismay, Pompeo is “an employee of the president of the United States. It’s about the president. This president has been a great showman. He’s done a good job in winning the election. He’s the president. But what he is doing is harmful to our country and even if you voted for him, you would have to see that this is not constructive. And it’s not unifying. Our founders gave us guidance. They said E Pluribus Unum—from many, one.  They couldn’t imagine how many that would be but we had to be one. And these Republicans in power—they can’t say from many one, except some people we would exclude and discriminate against.” Though Pompeo’s record “is of concern,” she hopes “with new responsibility, he will act responsibly. We’ll see.”

Pelosi also shares the concern of Rep. Adam Schiff, her appointee to the House Intelligence Committee, about the “dismantling of our democratic institutions that President Trump is so set upon, whether it is dismantling and discrediting the press, which I think is the greatest guardian of our freedom—freedom of press, dismantling of our Justice Department and law enforcement, in terms of the FBI, ignoring the system of checks and balances that exists in our Constitution, which is the strength of our country.”

Pelosi is also concerned about Trump getting rid of regulations. “They’re protections,” she says. “If he has an objection to something, let’s discuss that, make it better or not, if we think it’s the best it can be.” But it’s critical to recognize that “he is destroying the protections for clean air, clean water, food safety, consumer protections,” and the other protections, including the rollback of protections for LGBT people.

“The president is anti-governance. He doesn’t really believe in the role of government in improving people’s situations,” Pelosi says. “So it’s a comprehensive approach to dismantling democratic institutions. One of the reasons people should be very concerned is because the president is doing nothing to protect our electoral system, our democracy. The Russians have disrupted our election and he won’t look into it at all. And that’s a very, very bad course of action. Why not? We’re concerned about how he’s not dealt with sanctions on Russia,” among other issues.  “But how does he explain not protecting our electoral system? That is the basis of our vote, our vote is the basis of our democracy, and the president is not upholding his constitutional responsibility to protect and defend our Constitution and our democracy that goes with it.”

While young people at the #ResistMarch in West Hollywood last year were stirred up by Leader Pelosi’s rhetoric, it was clear they knew she was important—but not really who she was and why she was so passionate about LGBT equality.

Some of it is centered in Pelosi’s Catholicism, which is not the set of beliefs the Catholic Church espoused during Prop 8 and other political-religious battles. “As a Catholic, I was raised to respect every person. We’re all God’s children. In my family, there was never any question about that,” she says. “It didn’t teach me discrimination. It taught me respect. And so it prepared me very well, my Catholicism, for being a representative in San Francisco.”

Pelosi is guided by a moral imperative that young people may not understand today—the deep, personal impact of AIDS.

“Some people criticized me for talking about AIDS on my first day in Congress and I realized that it was not just about getting funding for AIDS research and prevention and care but it was about ending discrimination against people with HIV and AIDS,” adding that California has been a “tremendous resource” throughout the years for intellectual, political and economic response to the disease. 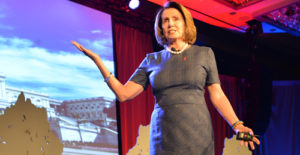 Pelosi responds viscerally when asked about losing friends. “Oh, my gosh. Oh, my gosh. A little flower girl in my wedding. My dear, dear friends in the community in San Francisco. We were going to two funerals a day. I was visiting people in the hospital all the time and quite frankly, when I say losing people,” Pelosi says, “I lost friends because I just walked away from them because they were not treating people with HIV and AIDS with respect. They would say to me, ‘I don’t know why you hire that caterer – don’t you know that everybody there has HIV?’ And I’d say, ‘Don’t bother to come to my house any more if that’s your attitude.’ It just changed my whole view of them.”

Within the span of her life and political career, Pelosi has personally experienced the heartbreak of HIV/AIDS and the political battles to fund and find a cure.

“I’ll never stop missing some of my dearest dear friends from then,” she says. “Of course we went from funerals to people saying help me make out my will because this is going to end soon, to those very same people looking for a job and then wanting to get married. So everything has improved but I would never have thought 30 years ago when I started all this in Congress that we still wouldn’t have a cure for AIDS. We’ve improved the quality of life, we’ve sustained life. Everything is better but it’s not over, not finished.”

It appears that the quality of simultaneously never forgetting while always looking forward is what motives House Minority Leader Nancy Pelosi. 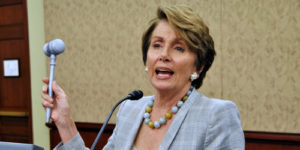