Police allege that it was all over a video game

He had over 200,000 followers on TikTok and was known for his funny videos. In his latest, Rory Teasley, 28, spoke about the challenges of growing old. Now, he never will. Police allege Teasley, a Pontiac resident, was choked to death by his boyfriend of 10 years, Docquen Jovo Watkins, 31, also of Pontiac.

According to a WDIV report, the Oakland County Sheriff’s office responded to a call at the couple’s apartment on the evening of Thursday, Jan. 6. Once there, they found Teasley’s lifeless body on the couch. Watkins allegedly told authorities that he and Teasley had had a fight over the video game “Overwatch.” Teasley was not breathing and was transported to a nearby hospital, where he was pronounced DOA.

“We see far too often across the country these days when people resort to violence over trivial and insignificant disagreements,” Oakland County Sheriff Michael Bouchard told WDIV. “There is never a reason where violence is acceptable over a disagreement. Those who do so will be held accountable.” 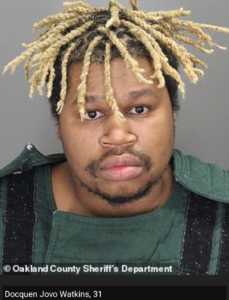 Docquen Jovo Watkins has been charged with homicide by the Oakland County Sheriff Department.

Watkins has been charged with second-degree murder. He was arraigned Sunday and held over with no bond. A preliminary examination is scheduled for Jan. 25.

Meanwhile, a balloon release and celebration of life is being planned for Teasley. It will take place Saturday, Jan. 15, at The Hamilton, located at 5 Carter Street in Pontiac. Attendees are asked to bring candles and green balloons.

“He was always friendly, polite, fun and very energetic,” said Woodward Bar and Grill co-owner Jeff Smith. “He was silly, very likeable. The life of the party, that’s who Rory Teasley was.”