Queer Things to Do: Camp With Bears, Vacation Close to Home, Watch Dirty Movies in Public

September is that sweet spot between summer debauchery and holiday madness — don’t let it pass you by without savoring a uniquely Michigan adventure, a sexy film fest or a mini shopping spree that rounds out your queer music collection. All the details you need to fill up your early September calendar are right here.

Just when you thought you had all the important Madonna stuff, it’s time to break out the credit card and clear some display space. Released in mid-August, the full 50-track “Finally Enough Love” LP includes — you guessed it — 50 of the record-breaker’s No. 1 club hits spanning four decades, many rare or previously unreleased. Our very own Queen Madonna — don’t forget, she used to party at Menjo’s! — is the first and only recording artist to have 50 No. 1 hits on any single Billboard chart.

And then there’s George Michael, who left us that sad Christmas Day in 2016. But his musical legacy lives on. “Older,” the gay icon’s third studio album, is set for rerelease Sept. 16 as a standalone and as part of an expansive box set that includes “Upper” on vinyl, an essay detailing stories behind the album and photos previously unreleased to the public. The original release of “Older” produced haunting, deeply personal hits like “Fastlove” and “Jesus to a Child.”

2. Rumble the Bumble in Ypsi

Ypsilanti’s eclectic This, That & the ODDer oddities shop will host an event the owners hope will become an annual celebration. The Rumble of the Bumble, set for Sept. 2, will take place alongside the longstanding First Fridays of Ypsi observation and the Festival of the Pollinators.

Peruse local merch from Michigan businesses and artists, and stick around for a live professional wrestling match that will pit Big Bruce Buzzbee against Guy Phosate and a dance party sponsored by ypsiGLOW. Organizers encourage festivalgoers to wear costumes inspired by pollinators and flowers — you could be crowned winner of the Festival of the Honeybee Rumble of the Bumble costume contest.

3. Go on a Queer Hike or Camp with Bears 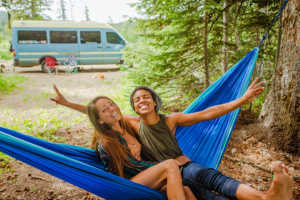 Early fall is ideal for basking in nature, and what better way to enjoy the changing seasons than with a queer pal or two? Meetup.com is a helpful resource for connecting with other outdoorsy (or outdoorsy-curious) queer folks. Groups like The Queer Outdoors, based in Ann Arbor, hold queer-friendly activities like hiking, foraging and camping. Find out more at Linktr.ee/thequeeroutdoors or search for hiking groups on the main meetup.com site.

Are you a queer man who just needs a weekend away? Camp Boomerang in Orleans (northwest of Lansing) bills itself as “Michigan’s Premiere Guys-Only Gay RV Park & Campground.” Upcoming themed events include Leather & Fetish weekend and OctoBEARfest weekend. Learn more at michigangaycamping.com.

Learn more about the films and buy tickets at humpfilmfest.com.

5. Staycation in an LGBTQ-Friendly Michigan Locale

With air travel rapidly reaching peak nightmare levels, road trips are where it’s at in late 2022. Check out one of these queer-friendly Michigan cities, as documented by the latest HRC Municipal Equality Index (MEI).