Ann Arbor City Councilman Jeff Hayner has come under fire for a homophobic quote he shared on social media. Hayner quoted writer Hunter S. Thompson’s 1971 novel “Fear and Loathing in Las Vegas” in what appeared to be a rant against the media. 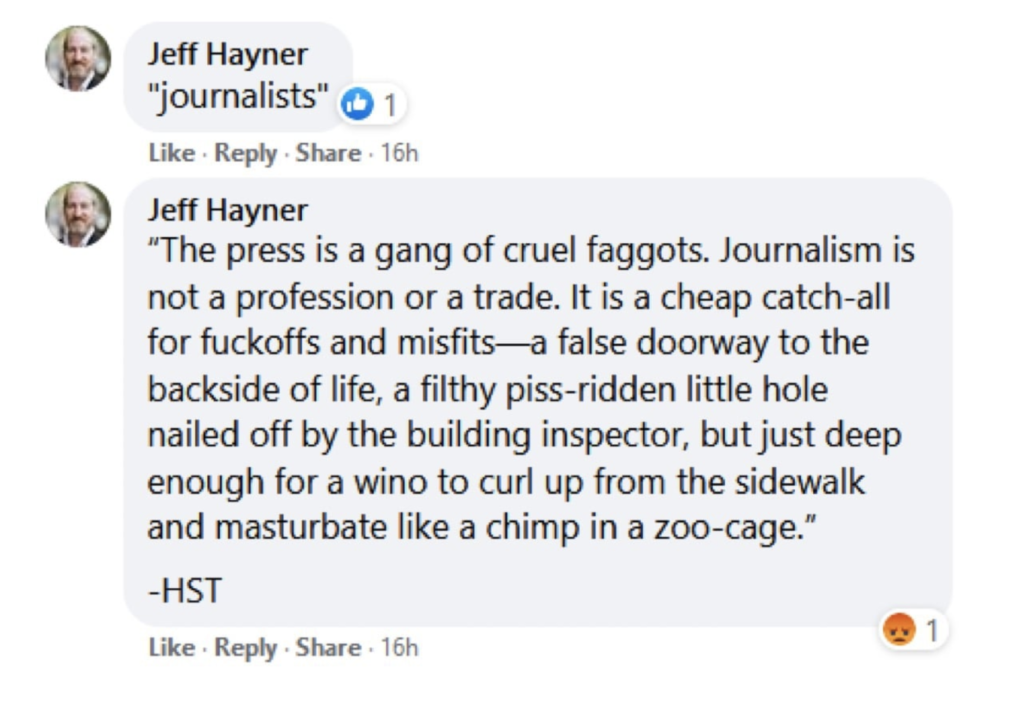 The Jim Toy Community Center Board of Directors issued a scathing rebuke of Hayner’s post in the form of a letter to the community.

“We find Councilmember Hayner’s quote choice very concerning and not representative of our mission or city values,” the letter read in part. “As a public servant, reporting to constituents, we believe the councilmember must take accountability for his actions. Simply defending choices by claiming that you have friends who are members of the LGBTQ community is not good enough. A group of your constituents are offended and deserve a sincere apology.”

Ultimately, Hayner bowed to pressure and offered a mea culpa.

“I understand that the language in the quote is considered offensive by many, especially so when taken out of context of the book, and the original thread,” Hayner wrote in a follow-up to the original post. “I also recognize that as a semi-public figure, I should be more careful and considerate of what I post. To be clear, those were not my words. That language doesn’t define who I am, who I have been, or who I will be.  I fully support the LGBTQ community. Anyone who knows me knows that I believe in everyone’s right to live whatever life they choose, as long as they do no harm to others.”

In addition to the condemnation of the community center, Hayner also faced criticism from within the council. At least five of his fellow council members took to social media to express their dismay and disapproval of Hayner’s post and choice of book passage — a choice he, after all, did make.

“This quote, which utilizes a highly offensive homophobic slur, is extremely problematic and unbecoming of a councilmember,” Councilmember Travis Radina wrote in an email he sent directly to Hayner. “Setting aside your tirade against the free press, the thoughtlessness and disregard you displayed for our LGBTQ residents in sharing such a quote is extremely concerning and hurtful.”