If there’s one thing the Ruth Ellis Center and the youth it serves are known for, it’s the ability to adapt and problem-solve when faced with challenges. And as the community navigates a world hard-hit by COVID-19, the dedicated staff of Ruth Ellis are working together to ensure that young people have access to their service now, just as they had prior to the pandemic.

“The young people are first and foremost our number one priority,” said REC Director of Development and Advancement Mark Erwin-McCormick.

Erwin-McCormick spoke with Between The Lines about the adjustments he and the REC staff have had to make following the stay-at-home order issued by Gov. Gretchen Whitmer. For one, the Health and Wellness Center has transitioned to telemedicine when it makes sense to do so.

“That’s primarily being used for the behavioral health services and then some for primary care as well,” Erwin-McCormick said.

The Health and Wellness Center remains open Monday through Thursday for appointments on a limited basis.

“Young people are still able to access their medications — medications including HIV meds, and then also if anyone is transitioning and accessing hormone therapy through the Health and Wellness Center, they’re still able to,” he said. “That’s huge.” 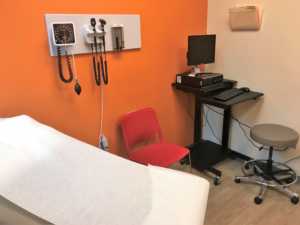 For the seven youths, ages 12 to 17, currently living at Ruth’s House, the center’s licensed residential care facility, McCormick said the staff has stepped up to the challenge of keeping them busy — and safe.

“The staff has done a remarkable job just coming up with online curriculums and daily activities just so that they can continue working toward their educational goals,” Erwin-McCormick said. “We have set up Kofi House for them to use right now during the day as more of a classroom setting, just so they can get out of Ruth’s House.”

Kofi House is the associated building down the street from Ruth Ellis that isn’t yet being used for programming and therefore was easy to turn into a more school-like space.

“That’s been really helpful,” he said. “Just [to] get out of Ruth’s House, [to] be in a new environment … then at the end of the day they can head back to Ruth’s House.”

Erwin-McCormick spoke of the support they’ve received from the community, making special mention of Project Beautiful-Inside and Out, one of their partner organizations. A pizza dinner for the young people at Ruth’s House would be sponsored by that group later that week, he said.

Because it’s a 24/7 job, the staff of Ruth’s House is especially aware of taking extra precautions as they interact with residents. Erwin-McCormick said he would be delivering some personal protective equipment later that day.

While all of Ruth Ellis’ programs fulfill crucial needs within the community, the Second Stories Drop-In Center is perhaps its best-known program. It is also the one that has been most affected by the pandemic, as several weeks ago, it had to temporarily shutter. Not only does the space provide food, safer sex supplies and a free laundry room — among other necessities — it is a place to hang out and interact socially with other LGBTQ people ages 13 to 30. As a replacement for the hot dinners served by the center, food boxes are being made available once a week for pick up. 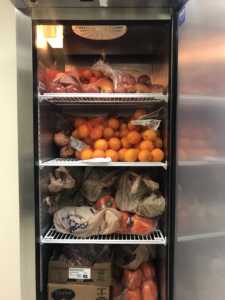 “We made sure we could still provide food resources, because so many of the young people who come to the drop-in center are experiencing homelessness or are unstably housed,” Erwin-McCormick said. “And often, food resources are the first thing to go. And so we wanted to make sure we could continue that program. We’ve had to modify it slightly; right now we’re doing it just on Fridays, from 10 a.m. until 3 p.m., and young people are reaching out to the drop-in center’s program manager, Dwayne Cole, and they’re scheduling times to come pick up their food boxes … so we can minimize a bunch of people coming in all at once.”

Everyone has been generally positive and optimistic, according to Erwin-McCormick. However, while the center has found many solutions in the face of adversity, the fact that it is a social gathering space for at-risk youth has been a particularly difficult challenge to overcome because in-person meeting is not possible.

“For the LGBTQ young people served by the center, this is their safe space,” he explained. “This is the place where they find community, where they find support, and when that goes away, it’s a huge loss. And so I think right now it’s about finding alternative ways for us to be able to somehow still bring the community together, whether that’s through social media or whether that’s doing peer support groups via videoconferencing — those kinds of things. But again, keeping in mind, not all the youths have access to technology.”

He added that REC is looking into funding opportunities that would allow it to provide access to such technology.

As director of development and advancement, Erwin-McCormick said he would also be pursuing grants that have become available as a direct result of the COVID-19 crisis to maintain food resources at the center. And because it’s not feasible for REC to hold a large-scale fundraising event now, REC leadership has been having conversations with donors and especially thanking those who give on a monthly basis. He said they’re thinking through some “cool and creative ways” to continue to engage the community as well.

“The development department is developing their own podcast, and the podcast will be open to the community,” Erwin-McCormick said. “It will be an opportunity for us to be able to highlight some of the experiences of young people, program directors, funders. There’s a vast variety of topics that are really at our disposal that would allow us to be able to connect with our community and a really meaningful way at a time when people are really isolated. So that’s one thing we’ll be launching, hopefully by the end of this month.”

The center is unable to accept most in-kind donations at his time. Clearly, monetary donations are needed now more than ever, but Erwin-McCormick said there are other ways to help. Gift cards for grocery stores can help supplement what they are able to provide in the food boxes. For the young people living at Ruth’s House, things to keep them occupied like age-appropriate (12-17) board games, puzzles and art supplies are appreciated. Those should be sent directly to the center. He also mentioned becoming a “Ruth’s Angel,” which is their monthly giving program, stating that even if one can only give $5 per month, that’s budgetable, sustainable income the center can count on.

Erwin-McCormick is currently working alone at REC’s newest building at 95 Victor St., where most of the renovations have been completed. With so much happening at Ruth Ellis he certainly has his hands full, but he shared why he is optimistic and why he holds hope for the future.

“The resiliency of the young people we serve is the number one thing that gives me hope,” Erwin-McCormick said. “They face extraordinary challenges every single day, even pre-COVID-19. And so I know their strength, and I know that they will continue to seek joy and seek opportunities. I know that when this is all said and done, we will get through this, [with] just an overwhelming generosity and support from our community — just people wishing us well and asking what people can do to help us out. I think what keeps me going is knowing it is not just me, it is not just the staff at Ruth Ellis Center, this is a community effort to ensure that the young people continue to be supported now and after COVID-19. That’s the optimism that I see and feel every day.”

The Ruth Ellis Center is located at 77 Victor St. in Highland Park. Find out more online at ruthelliscenter.org.