Sam Smalley Faced Down a Mob of Grown Men at an Anti-LGBTQ+ Rally in Dearborn. Here’s Why He’s Standing Strong.

'I just want everyone to live their life and be treated equally,' Smalley tells Pride Source

It was not your typical anti-queer rally. There were hundreds — four, five, maybe six — packed in so closely together it was hard to count the number of angry, mostly Arab American men in the pavilion out front of the Centennial Library in Dearborn. They carried signs calling gay men “sexually perverted animals” and shouted anti-gay slurs.

In the middle of this enraged mob was Sam Smalley, a trans teen and recent Dearborn High School graduate, sitting on both a traditional Pride flag and a trans Pride flag. His only weapon was a blowhorn, which he activated to drown out only the most egregiously anti-gay claims.

Just after the rally began with a Muslim prayer, delivered first in Arabic then English, Smalley was surrounded by men shouting “faggot” at him and telling him to go home. Some suggested forcibly removing him to the back of the pavilion where the rally took place. In the end, Dearborn Police had to erect fencing around Smalley and a second counterprotestor, Karen Cristian of Dearborn, to protect them from the crowd. Additional police officers had to be called and remained positioned near Smalley at all times. 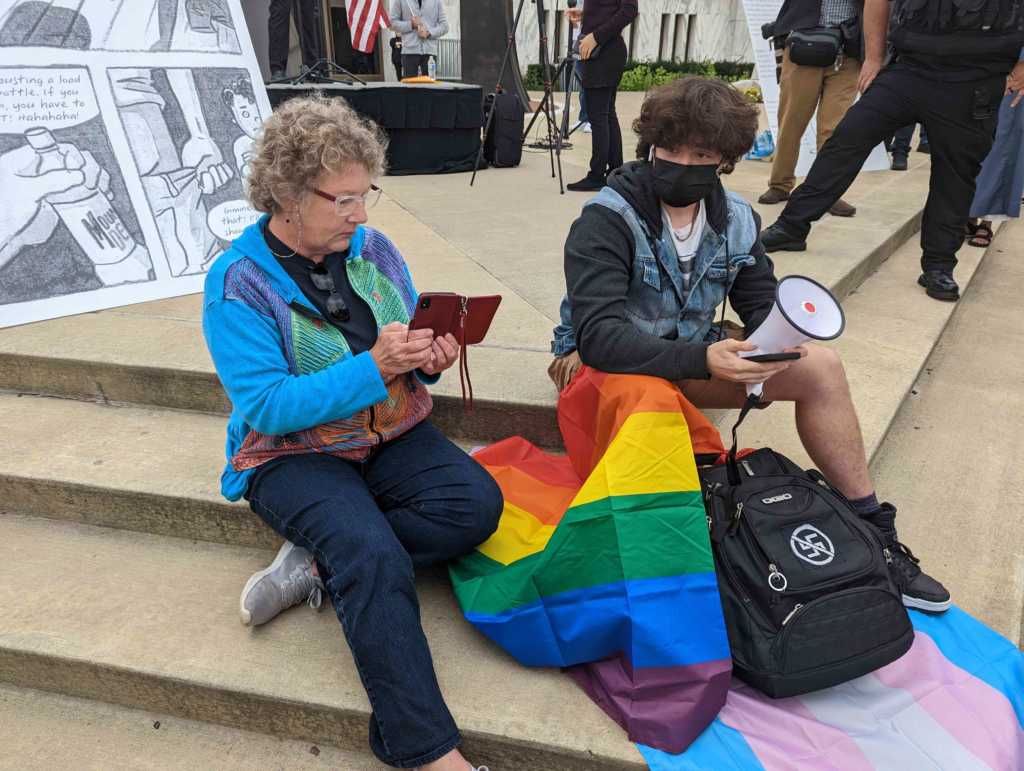 A man standing just next to the stage, the one carrying the “sexually perverted animals” sign, shouted at Smalley that he didn’t respect him. But Smalley just sat there. Casually. Bravely. Confidently. Nonchalantly. No matter what was said to him, no matter how irate the crowd became, Smalley held his ground.

“It’s really upsetting,” Smalley, 19, a second-year student studying engineering at Michigan State University, said of the attempt to ban queer books in his hometown. “I think that it’s all a political ploy in order to divide the community and ostracize the LGBT community in Dearborn.”

Though the entire backward banning attempt was the twisted brainchild of Stephanie Butler, the Moms for Liberty member found an enthusiastic throng of followers in the Arab American community. Sadly, it was not a surprise to Smalley, who said that growing up in Dearborn he “faced a lot of harassment from everyone because I was transgender.” From the age of 13 to adulthood, Smalley said he was harassed. “And I think it’s ironic that the same people that claim to want to protect their children are the same type of people that teach hate toward people like me.”

Smalley said there are queer people in Dearborn who are “faced with harassment because of the rhetoric they’re spreading around. It just felt like another reason to stand up for myself and the LGBTQ+ community in Dearborn.”

If the crowd was enraged and clearly agitated by Smalley’s presence, he said he wasn’t surprised.

“I think the mob was pretty much what I was expecting,” he said, pointing out that men are usually more outwardly vocal about their homophobia and transphobia. Therefore, he said, he went into the debacle prepared.

“This may sound grim, but I went into the situation knowing that I could experience violence of some sort,” he admitted. “But at that time, I didn’t care. … I had decided to go there and stand my ground no matter what happened.”

Smalley said none of what he experienced at the rally was new to him. Instead, it made him recall his high school days. “The same thing was happening from kids that were my age. I dealt with that for four years. So, just for a few hours, it was pretty much the same thing again.”

Upon arriving, Smalley presented himself to the first police officer he saw and volunteered to have his bag inspected to show he had no weapons. “Thankfully,” he said, “I had the police there to protect me. So, it wasn’t as daunting.”

Butler later claimed in an email to Pride Source that police had to erect a barrier to protect the crowd from Smalley — a ludicrous claim, says Smalley. “I don’t know what they’d need protecting from,” said Smalley. “If she’s claiming that one teenager was a threat to a crowd of hundreds of men, I think that’s pretty pathetic.”

Once the rally was over, Smalley had to be escorted to his car by multiple police officers. Small children followed along, continuing to taunt him. Still, Smalley said he was not shocked. “If anything, I was surprised that the police did their job so well. I went into the situation fully expecting to get into a fight of some sort.”

The whole point of the campaign, said Smalley, “is that kids not learn about queer topics and not be exposed to queer people. I think that reinforces the homophobia that already exists in the city. And I think that’s what these people want.”

Despite the strong stand Smalley took for queer people at the rally, he confessed he doesn’t actually consider himself an activist. “I do go to rallies and stuff when it comes to social issues,” he said. “But that’s just what I think is right. I don’t really stand for anything special politically. I just want everyone to live their life and be treated equally.”