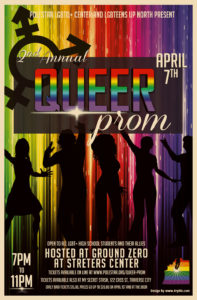 The second annual Queer Prom in Traverse City, a high schooler-exclusive dance that celebrates LGBTQ youth and their allies, is expected to draw in more than 200 attendees from communities near and far.
John Young, the vice-chairperson at Polestar LGBTQ+ Community Center in Traverse City, was the driving force behind the first Queer Prom in 2017. He anticipates this year’s dance to see double or even triple the number of attendees compared to last year’s — a rare figure for queer proms at large.
“It’s unheard of nationally what we have done,” Young told BTL. “We’re expecting 200 to 300 kids. Only a handful of queer proms put on nationally have numbers in the 300 plus range – I can think of four offhand.”
Event organizers are intentionally reaching out to students from surrounding rural communities, areas Young says aren’t as progressive as Traverse City. Advertising the first Queer Prom in such areas proved to be difficult, though, as many of the dance’s promotional posters were found to have been ripped down from storefronts and other venues.
The event was a huge success, nevertheless. Eamonn McGonigle, a student at Traverse City West Senior High who attended last year’s prom, said some kids drove as far as two hours to attend.
“It’s important for individuals in rural areas without a community like Traverse City to see the same level of support,” he said. “It’s a great event and shows they have people to turn to beyond just family and who they’re around all the time.”
LGBTeens Up North, the youth group within Polestar responsible for planning the Queer Prom, is currently in the process of raising funds. The committee is accepting donations from both businesses and individuals to reach its $3,700 goal, which will cover costs for the venue rental, beverages, food, a DJ and more.
The committee is also prioritizing attendee safety by including an LGBT police liaison at the event and conducting background checks on dance chaperones. Young said it was rumored that an organized protest would show up at last year’s venue, a false claim nowhere close to the lone objector who showed up instead.
Despite the security measures, Young said there’s been little pushback from the community. He said staff at the first venue were thoughtful enough to wear rainbow ties, waive the $30 valet fee and surround the single protester with orange umbrellas. Students were also treated to a short welcome video featuring direct messages of encouragement from celebrities like Kylie Jenner, Little Big Town, Caitlyn Jenner and Zac Posen.
“Several parents wanted to peek into the room, and they came back with tears because they said they haven’t seen their kids so happy in years,” Young said.
Aby Kowalske, a student at Traverse City West Senior High, is a member of LGBTeens Up North. Kowalske thinks the event can also be beneficial for students having trouble moving from middle school to high school, gay or straight.
McGonigle added that the event is unique even for a city like Traverse City.
“We don’t have many region-wide youth LGBT events besides Traverse City Pride,” he said. “This is new to the area, and it encourages more participation and visibility.”
The Second Annual Queer Prom will take place on April 7 from 7 to 11 p.m. at the Ground Zero, located at Sreter’s Event Center. Tickets cost $5 before rising to $20 after April 1.  Email [email protected] for information on scholarship tickets. Individuals and businesses interested in sponsoring the event are encouraged to visit tcpolestar.org/queer-prom.