Considering the number of LGBTQ athletes who have taken center stage in the last five years — Caitlin Jenner, footballer Michael Sam, ice skater Adam Rippon and freestyle skier Gus Kenworthy, to name a few — the stereotype that gay people are not interested in sports is practically obsolete.
Every Thursday night at the Catalpa Oaks County Park in Southfield, the team members of the Detroit Drive LGBTQ soccer league meet to further kick that stereotype to the curb.
“Of course that’s absurd,” said Shawn Conner, captain of the league. “Gay men and women are involved in every aspect of society. That includes sports. I mean, figure skating anyone?” 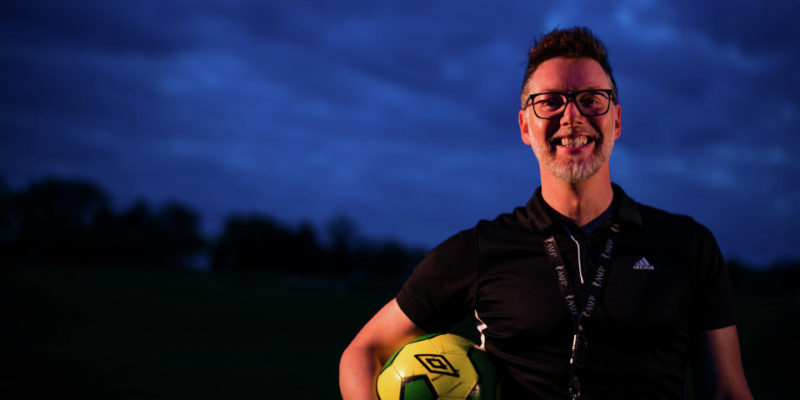 Detroit Drive is described as a casual “pick-up” soccer league for recreational skill development. Players come with varied skill levels and from a wide range of professional backgrounds — which makes joining the team a great opportunity to hone one’s skills in the sport and network.
“But mostly to have fun,” explained Connor, who is a doctor by day. He started the team six years ago with a friend.
“The majority of our players are gay men, but we also have gay women, a few trans players and even a few LGBT-friendly straight men and women,” he said. “We are open to all regardless of age, gender, orientation or experience.”
Before the start of each season, Detroit Drive holds a registration event at Pronto! Video Bar in Royal Oak where people interested in joining the team can meet the players and learn more about the league.
After coming to a few Detroit Drive practices, William Lindsay, now a retired championship figure skater, got involved with the team and has been a regular since 2014.
“I spent most of my life participating in a very individualized, indoor, cold sport. I would never give that up, but as an adult, I enjoyed the team aspect of soccer. I had to completely change my thought process and learn to rely on my teammates,” said Lindsay, who said the camaraderie keeps him coming back. “It is definitely the friendships with the players. In fact, I count many of the soccer boys as some of my best friends. It is fantastic seeing them on the pitch as well as ‘out and about’ around town.”
Although Detroit Drive is a casual league they still compete in tournaments. This year at the annual Pride on the Pitch tournament held in Chicago, Detroit Drive sent three teams to play: a competitive team that placed fifth out of eight, and two recreational teams that placed second and third out of four.
“Organized gay sports leagues are a powerful statement that we are not ashamed of who we are. In fact, we embrace who we are as gay athletes. Many of our players are young and recently out. Some have gone through great sacrifice and have lost their families and their friends,” Connor said. “I’ve had players who have later told me that they were on the verge of suicide, but joining our soccer club made all the difference for them. It has been such a positive experience for everyone involved that I would always recommend an organized gay sport to anyone.”
Alvaro Lozano would describe himself as a “shy kid” growing up and “a little on the heavy side.” After joining the team this year, he found it was the empowerment he needed to open up and be himself.
“It wasn’t my first time playing soccer but it was my first time playing for a team like this,” he said. “I’ve never felt so welcomed and or felt so fitting. I could be myself in front of all these guys. As I’ve gotten to know them I’ve made some great friends. I couldn’t ask for a better team.”
And then there are the physical benefits of playing soccer, said Lozano.
“It’s a great stress reliever when you’ve had a long week, and you just want to do something to get some of that energy out,” he said. “I’ve lost a few pounds, which is really nice. My legs and butt look great.”
For more information on joining Detroit Drive visit outforkicksdetroit.com/ or facebook.com/groups/OutForKicksDetroit.