'Come Out! in Detroit' documents the history of early local LGBTQ+ activists

When Merrilee Melvin, then 24, came out as lesbian to some coworkers in 1972, she didn’t expect to lose her job.

“I was working at a little print shop in Detroit, and I had come out to my coworkers,” she tells Pride Source via phone from her home in Clarkston, Michigan. Somebody told the boss; soon after, she was fired.

Melvin wasn’t unemployed for long. The Michigan Gay Confederation was putting together an event scheduled for June of 1972. Named after the location of the 1969 Stonewall Riots, “Christopher Street Detroit ’72” was Michigan’s first Pride march.

“I got $24 a week to be the official organizer,” Melvin recalls. As a result, she took to calling herself “the first professional lesbian in Michigan.”

It was a monumental event. And, sadly, one that far too many people have no idea ever happened. 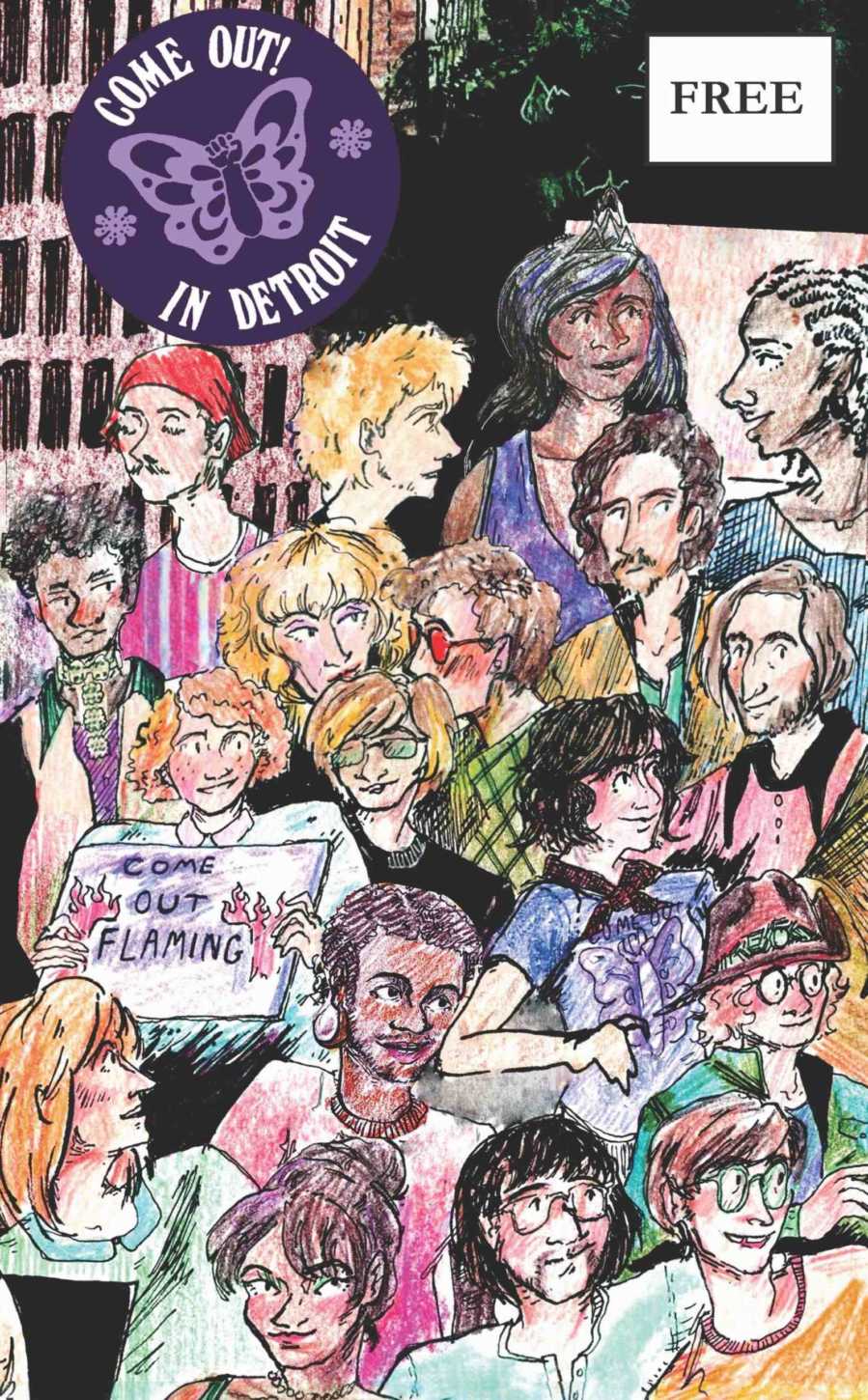 Historian and Michigan State University adjunct assistant professor Tim Retzloff, who is gay, seeks to change that. “I wanted to make sure as a historian that it gets remembered and that history gets known,” Retzloff, who was 8 years old in 1972, tells Pride Source. And the 50th anniversary of the 1972 march coming up was the perfect time to document it.

The question, however, was how. What form should such documentation take?

“As a historian, I’ve done articles. I’ve done features for Between The Lines, I’ve been involved in exhibits, I’ve done panel discussions,” Retzloff says. “I’m even a talking head in the Jeff Montgomery documentary that Daniel Land is doing.”

But newspapers “come and go, so an issue is out for two weeks, but not everybody sees it. Exhibits are up for a limited time,” he says, noting that not everyone can go. “What you have to marshal to make a documentary is kind of tremendous: the cost of it and just the logistics of it. So, none of those made as much sense as trying to do a comic.”

At first, Retzloff envisioned something small, perhaps four or five pages. But the scope grew quickly. “There was lots of brainstorming about first coming up with the script and the narrative, and it grew over time,” he says. “It’s in four-page increments for comic books, so the interior quickly went from 24 to 28; 32 if you count the covers.”

The result is “Come Out! In Detroit,” a full-color non-fiction comic book that tells the history of the Christopher Street Detroit march, which had an estimated attendance of 200 to 400, according to Retzloff. The goal is to distribute 20,000 copies of the books for free, and there is a donation fund set up for the project to help pay for “printing, storage, promotion, and delivery of the comic book,” the GoFundMe page, which has exceeded its fundraising goal of $6,000, reads.”It will be distributed at Pride events, community centers, libraries, bookstores and bars, with a special early release at selected comic book stores for Free Comic Book Day.”

Taking this project from conception to reality was aided by Retzloff’s close connection to an artist who identifies as a non-binary lesbian. Retzloff recruited Isabel Clare Paul, an Ypsilanti artist and graduate of the Center for Creative Studies in Detroit, to create the illustrations for the comic. “I’ve known Isabel since she was born because I’m good friends with her parents,” he says. Paul’s parents were friends of Retzloff in high school and college, and “growing up, he was my uncle Timmy,” Paul says.

Paul remembers Retzloff’s pitch for the project: “I have this idea for this comic. It’s only going to be a couple of pages. Would you be interested?”

She was. And her interest continued as the project grew in scope. “Every email update, it just kept turning into a bigger and bigger project that became more important,” she says.

The style progression of Ken Dudley for “Come Out! In Detroit.”

While there are many figures featured in the comic, it was very important to Retzloff that Ken Dudley was well represented. He was a Black activist with the Detroit Gay Liberation Front and spoke at the 1972 march. “He later helped found what is believed to be the first formal Black gay organization in Detroit, in 1973,” Retzloff says. “The group was called the Black Association for Gays and lasted from late 1973 until at least into 1975.” Dudley died of AIDS in 1991 when he was only 44.

“I feel very deeply that he needs to be remembered and celebrated. He’s not here to tell his own story any more, and there’s very little from anything in his own voice aside from the speech,” Retzloff says. “When I saw that [Paul] was going to depict him well and bring him to life, I just was excited.”

“Come Out! in Detroit” has been a labor of love for both Retzloff and Paul.

“This project was really important to me just from the standpoint of making history accessible to another generation of LGBT kids and being part of that, Paul says. “I think sharing that history and having that connection to your kind of ancestral community and learning that history is really important. Paul says she is excited to be a part of the project and that details about this period in local history will be “more accessible for kids my age.”

“I am kind of amazed, and I am in awe of her,” Retzloff gushes. “I’m in a different place in my life and my career, and she’s kind of launching herself, and I’m excited that this is kind of her beginning. The idea of a young lesbian and an older gay guy trying to tell this story is kind of fun for me.”

Retzloff and Paul agree that they make a good team.

“It’s been really a learning process for us both, but in a really good way because he comes from a very academic point of view and I come from a more visual artistic point of view,” Paul says. “There were a couple of times when we weren’t speaking the same language, but we had the same idea.” She adds, “It’s been so much fun, and I’ve learned so much about him.”

For Retzloff, the project also came at the right time. “This has really helped me get through the pandemic in ways that I’m really grateful for,” he says. “And I can’t possibly sing enough praises to Isabel for just the stunning, amazing, awesome, incredible, fantastic work that she has done.”

Julie Herrada, the curator of the Labadie, describes it as “one of the world’s foremost collections of social protest moments including primary source materials going back to the 19th century and into the present.”

“Tim and I go back a long ways to the late ’90s,” Herrada tells Pride Source. “I think [this project] is really exciting. Really, really contemporary, very timely, and the format that he chose to tell the story is going to be very popular. It appeals to people of every generation.”

“Come Out! in Detroit” reminds Herrada of other historical comics that she describes as “really compelling works,” including the March trilogy by John Lewis about the civil rights movement and George Takei’s “They Called Us Enemy” about his family’s time in Japanese internment camps during World War II.

“Comics have been really popular in the recent years,” she says. “I think that [Come Out! In Detroit] has the potential to have the same enduring impact as those other ones.”

Merrilee Melvin, who can be seen in photos from the time wearing a hat and carrying a bullhorn, agrees. “I think it’s absolutely wonderful,” she says. “Isabel is just a wonderful artist.”

Melvin is impressed with what she’s seen so far. She recently met with Retzloff and Paul and got to see the project as it nears completion. “I noticed that in the cartoons in the little boxes, people are saying things that they actually told Tim,” Melvin says. “This is the real deal. This is not made-up stuff. He’s telling the real details about what happened years ago.”