This Gay Michigan State Rep Candidate Doesn’t Know How Long He Has to Build a Better State, But He Won’t Stop Trying

Jason Morgan is no “Debbie Downer.”

Yet that’s what the Washtenaw County Board of Commissioners Chair and candidate for Michigan’s 23rd State House District fears people might think upon learning he has Becker Muscular Dystrophy. Morgan was diagnosed with the condition, most frequently found in boys, at about age 13 after experiencing unexplained muscle pain. It’s a neuromuscular disease caused by mutations in the dystrophin gene that result in progressive muscle weakness and loss of muscle mass. Related to Duchenne Muscular Dystrophy, BMD is less common and has a milder course.

“I’m 33,” said Morgan, who is also an instructor of American Government at Washtenaw Community College and a Northern Michigan University (NMU) Trustee. “I run multiple times a week and bike and swim, and I’m extremely active and really, really fortunate to have overcome what the doctors told me was going to be my prognosis.” That prognosis was a disease that would progress at varying levels and significantly impact the arms, legs and, most importantly, the heart. The long-term effects are losing the ability to walk, very likely in one’s mid-20s. The life expectancy for what Morgan has — even if able to maintain the ability to walk — would be somewhere in the 40s.

“One of the things that I often hesitate to talk about — because I always wish I’m being cheery and positive and optimistic as I generally am — is the part of the disability that people don’t see,” said Morgan, who has regular medical appointments to monitor his heart. He sometimes wakes up in the morning with muscle pain and soreness if he overdoes it.

By being upbeat, Morgan doesn’t wish to give the wrong impression: It’s a careful balance. And part of that equation was his decision to publicly disclose he has muscular dystrophy in a video in 2017. Morgan had been conditioned to believe that strength is the best indicator of being qualified to serve and whom to support; however, after learning how few elected officials shared his disability, Morgan felt his story might inspire others with the same or other challenges. In a way, it was, for Morgan, a coming out story.

“It really just hit me one day and I said, ‘You know what, I’ve gotta come out and talk about this,’” Morgan told Pride Source. “I felt like I needed to talk about my disability in a way that was not a story that would make people feel bad for me by any means — because I am so, so fortunate to be where I am in my life — but to use it and to share it as a story of hope, of overcoming pretty big obstacles to achieve your dreams because that’s how it has been for me.”

As a State House candidate, Morgan believes it’s his combined lived and professional experiences that prepare him for elected office — whether that means living with a disability, being gay or experiencing life in rural Michigan. A Pinconning native, Morgan brings with him the experience of working for Secretary of State Jocelyn Benson and Congress members John Dingell, Debbie Dingell, Haley Stevens and other elected officials.

“I’ve really experienced what it is like to struggle and feel like the deck is kind of stacked against you,” Morgan said, in reference to being LGBTQ+, having muscular dystrophy and growing up in a low-income household. “And my hope is that I can bring that experience forward to work on behalf of every single person in Michigan who has felt that way and who needs someone fighting for them and standing up for them when no one else is.” 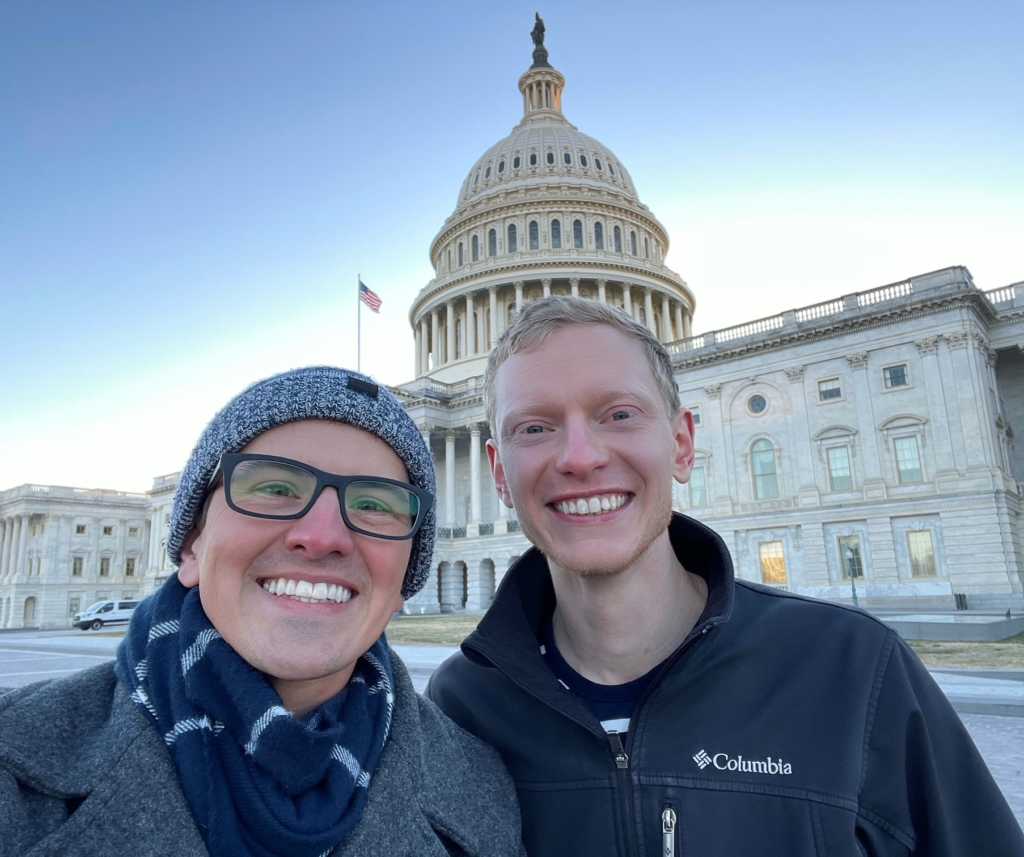 When he’s not tackling big picture issues on behalf of Michiganders, Morgan might be found enjoying time at home. Newly engaged, Morgan and his fiancé, Jon, recently moved in to their first apartment together in Ann Arbor. They each bring to the relationship one cat whom Morgan calls best friends. “We’re definitely solid cat people,” Morgan expressed.

Morgan said he’s running for office to help make Michigan and its communities better places to live, work and raise families, and that begins with infrastructure. “Building a better Michigan,” the focus of Morgan’s campaign, means not just repairing roads and bridges, but also investing in Michigan’s “people infrastructure,” or things like public education, community college and four-year institutions, as well as the wraparound services that help individuals thrive in their communities.

Protecting access to voting, ensuring workers’ rights and advancing social justice, including LGBTQ+ rights, are also among Morgan’s priorities, if elected. As a county commissioner, Morgan was proud to help lead Washtenaw County’s effort to recognize Transgender Day of Visibility and Pride Month each year and to introduce the county’s first-ever Equity and Inclusion Statement and Non-Discrimination and Anti-Harassment Policy.

Pride Source is not the first to mention Morgan’s long list of accomplishments at just age 33. It should also be noted he was student body president at NMU, he earned a Master’s of Public Administration from the University of Michigan and he currently serves in the U.S. Coast Guard Auxiliary. 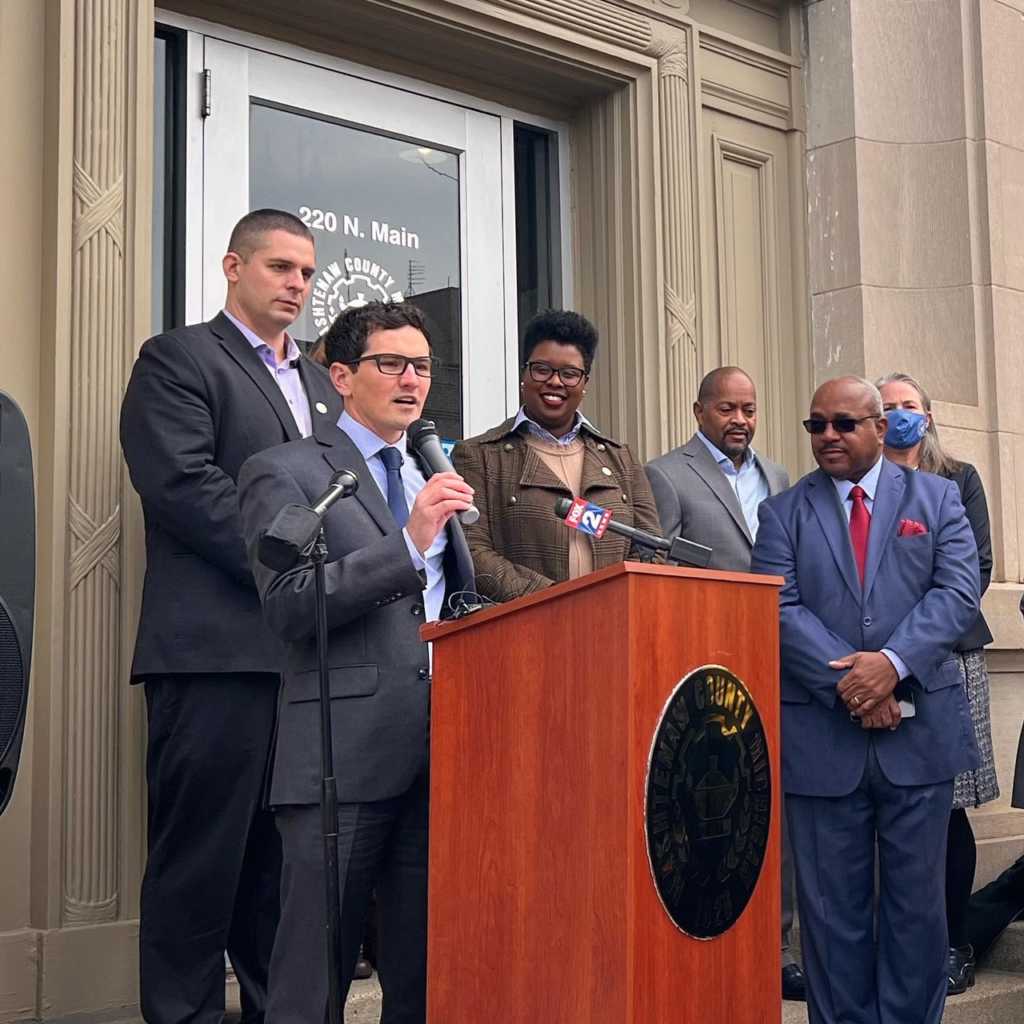 “I often have folks who wonder how I’ve done so much at a young age,” said Morgan, who has been a Muscular Dystrophy Association volunteer since 2007. “And the answer, quite honestly is, I don’t know how much time I have. And so I am very intentional about spending every minute that I have trying to do something good and useful and helpful to others in the world. Because that is what I have found to be my purpose.

“So it’s not just that I want to go really far, or something like that,” he continued. “It is a matter of wanting to do as much as I can in the time that I have. And hopefully that time is a lot longer than the prognosis medically, but just in case it isn’t, I don’t want to waste any minute, or any day not doing everything that I think I can do to make the world a better place.”