Longtime LGBTQ+ allies and parents Gary and Sheila Bigelow are ready to open their home to a local teen in need of stable housing.
It’s been a long journey for the pair. In the ’90s, when a pastor the family knew was being removed from his congregation because he was outed as gay, they traveled to Benton Harbor where their 15-year-old daughter Lisa spoke out on his behalf “with her knees knocking in her shorts,” Sheila said. It was around that time that Lisa began attending a support group sponsored by the Kalamazoo Gay/Lesbian Resource Center — now known as OutFront Kalamazoo — something the couple was aware of, even if they didn’t discuss it.
Gary and Sheila’s support was never in question, but when she came out to her parents a few years later, Lisa was hesitant. “It was between her junior and senior year in high school,” Gary recalled. “One night, my wife and I were already in bed, close to asleep, I guess… she came in and said, ‘I think I’m gay.’”
Lisa then said good night and left the room. After a while, her father chuckled a little at the memory of her abruptness. He admitted to feeling somewhat uneasy at the time, if only because he imagined life could be more difficult for his child because of her sexual orientation.
Sheila, who was less surprised by the admission than her husband, called their associate pastor the following day and cried. Like her husband, she was scared for their daughter. “I didn’t want this child that we love so much to be rejected,” Sheila said. “I didn’t want her to be in danger. And after I got through that day, it was easier. You don’t love a child all their life and find out one day that they’re gay and say, ‘I don’t love you anymore.’” 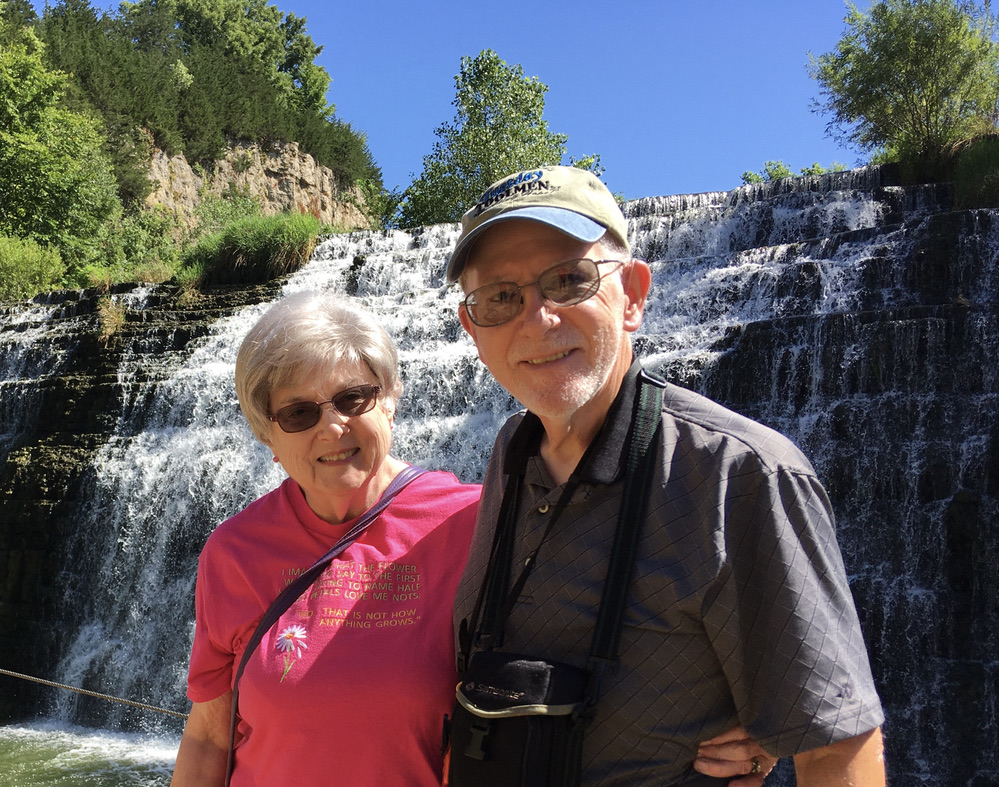 The Bigelows said their relationship with their daughter remains supportive to this day. Lisa Jenn Bigelow is a librarian and author in Illinois who has written three young adult novels featuring main characters who are LGBTQ+.
Now Lisa Bigelow is fostering a young teen, while Gary and Sheila Bigelow recently hosted an unaccompanied minor from Honduras. When the couple heard about a new program to temporarily house LGBTQ+ homeless youth in southwest Michigan, the Bigelows were eager to sign up. The two were encouraged to get involved by their pastor at Portage Chapel Hill United Methodist Church.
Michigan’s first Host Homes program was launched last November and is a collaboration of OutFront Kalamazoo and OutCenter of Southwest Michigan.  The program will provide case management and help connect youth with supportive adults willing to provide housing. The Bigelows are the first couple to volunteer; however, due in part to delay as a result of the COVID-19 pandemic, they have yet to host a youth participant.
Hunter Willard is a social worker and director of homeless youth programs at OutFront Kalamazoo. Willard, who uses they/them pronouns, said they will be the main case worker for the program.
“It is a youth-driven selection process,” Willard said, outlining how youth are matched with host families. “There will be files on each individual host family and the youth is able to select which family they would think is the best fit for them. The host family will host them for up to six months while we work on either family reunification or seeking out means of shelter.”
To be eligible, LGBTQ+ youth must be aged 13 to 17 and experiencing housing instability.  The program is designed to keep them out of the foster care system whenever possible.  Willard said LGBTQ+ youth can find themselves homeless when family members kick them out because of their sexual orientation or gender identity or when they leave home as the result of an unaffirming environment.
According to a 2018 study by Chapin Hall at the University of Chicago, LGBTQ+ youth are disproportionately represented among the nearly 4.2 million youth and young adults in America who experienced some form of homelessness during the 12-month period the study examined.

Most troubling, the study found, LGBTQ+ youth had over twice the rate of early death among youth experiencing homelessness.
Gary and Sheila Bigelow are aware that sometimes, family rejection is related to the misperception that the LGBTQ+ teen is living in conflict with the family’s religious faith. Both emphasized their aptitude in refuting anti-LGBTQ+ interpretations of scripture if that will aid in family reconciliation. They’ve also helped promote the Host Homes program.
“We’ve been trying to make ourselves known the best way possible,” Willard said. “I’ve done multiple live information sessions that have been on our Facebook. We’ve done a Living OutFront episode, which is our web series where we interviewed the first host family to actually go through the application process. But mainly, we used our social media…as our broadcasting system to let people know that this is a thing and that we’re here to help.”
Once a potential host individual or family steps up to help, the onboarding process involves a screening and basic training that includes topics like LGBTQ+ cultural competency.
Originally known as the GLBT Host Home program, Host Homes is a housing model with a 15-year history. Ryan Berg is program manager of the ConneQT Host Home Program of Avenues for Youth, a nonprofit that addresses youth homelessness in the Minneapolis/St. Paul area and where the model originated. Berg authored “No House to Call My Home: Love, Family and Other Transgressions,” a 2015 memoir of his experience with LGBTQ+ homeless teens in New York.  Pride Source asked Berg to share the history of the program in the Twin Cities along with his experience.
“The LGBTQ community came together and recognized in 1997 that queer and trans youth were going into the shelter system and experiencing discrimination, violence and exploitation based on who they were and how they identified,” Berg said. “[They] did some research — a feasibility study — and host homes as a model was determined to be a good fit. So the program was born out of community activism.”
Berg said the basic concept is mutual aid, in which those who are able to share resources that others need provide them in the form of things like food and shelter.
“Relationship is at the core of healing for so many young folks,” Berg said. “Ensuring that they can bring their whole selves to the experience without having to censor aspects of who they are in order to get their needs met is essential.”
Because youth experiencing homelessness have been failed by adults “time and time again,” Berg said, self-determination is at the core of the model. He and Willard both emphasized youth are not “placed” in a home, as in traditional foster care; they have the agency find the fit that works for them. Youth review the applications of hosts, not the other way around.
Berg had advice for prospective host families: “Consider why you want to become a host,” Berg said. “The successes that we’ve seen in our program have been really coming from hosts that are able to recognize that this isn’t about saving anyone.  This is about showing up and walking alongside someone in a season of their journey.”
Gary and Sheila Bigelow know that at minimum they will be providing room and board to a homeless LGBTQ+ youth. Both indicated they will leave it to the young person to determine whether that evolves into a closer relationship, be that mentorship or family-like bonds. For now, they’re ready to clear out Sheila’s sewing room to welcome a young person who chooses them.
“I’d almost say family is everything to us,” Sheila said. “We weren’t helicopter parents. We only have two kids; they’re spread out. I also would say that having lived far away from our families that family is what you make [it].”