Representation matters. And since media representation has a long reach, it matters a whole lot. Leo Sheng knows this all too well, which is why his role playing Micah Lee on “The L Word: Generation Q” is such a big deal. It isn’t every day that shows include an Asian trans man as an important part of the storyline.

In a 2018 interview, Miss Major Griffin- Gracy, who has been advocating for trans rights for over four decades, told Them.us, “It’s not that we believe we’re this or that. We know that’s who we are. When the dust settles, I want my trans girls and guys to stand up and say, ‘I’m still fucking here!’”

Sheng says that he is conscious about when he wears the button. “I wanted to wear it when there would be a lot of press,” he says. “As I’m starting my career and forging my own path, it feels very important to me to be intentional about my presence in public.” Sheng hopes that wearing the pin will start conversations that, hopefully, lead to learning.

Sheng, who grew up in Ypsilanti but now lives in Los Angeles, is the adopted son of two moms, both social workers, who still live in Michigan. “I wish they were closer physically,” he says.

“You can imagine dinner table conversations in middle school, which were very deep, very intense,” Sheng says of having social worker moms. Often, they would discuss something someone said to him at school, a weird experience he had or “my parents explaining the importance of providing support as a peer and what it was to show up as a friend.”

“People will likely assume that, having two moms, they were automatically on board but… there was still an element of challenge and uncertainty for them,” he says. “For any parent there’s going to be a moment when you have to recalibrate.”

In addition to his moms, Sheng says his support system also includes close friends from high school and college and his “incredible housemates.”

“I’m also slowly building more community here in LA. I’ve only been here a couple of years and then the pandemic hit,” he says, adding that “it’s there and it’s growing.” 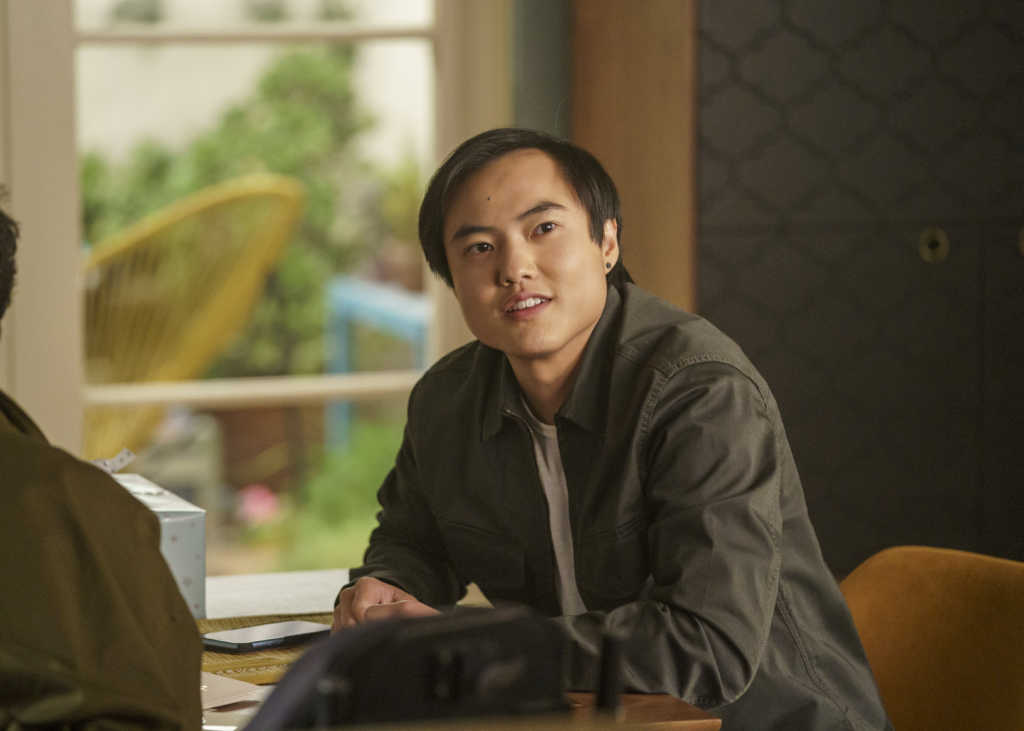 Sheng’s introduction to transgender people was, in fact, the original series of “The L Word” in the form of Max Sweeney, a trans man played by Daniela Sea, a non-binary actor.

“For a lot of trans guys, myself included, it was the first time I encountered a trans man in my life, ever. I didn’t know that trans guys existed.”

He describes being cast to play Micah Lee in “The L Word: Generation Q” as a “full circle moment.”

It was all the result of “just kind of good timing,” he says. Sheng was in grad school, following in his moms’ footsteps studying social work, when he did an independent film called “Adam” that was part of Sundance in 2019. It was at Sundance that he met his manager, who soon after sent him the character breakdown for Micah. “They were explicitly looking for an Asian trans guy and in my very limited knowledge I knew that wasn’t a common character to be sought out,” he says.

“I auditioned from Michigan,” Sheng recalls. “And flew out to LA for a screen test and a chem read with Ari [Mandi] who plays Dani.”

If you’ve seen the show, then you know that the chemistry between Sheng and Mandi is evident in the relationship between their characters, Micah and Dani.

Micah is, according to Sheng, “Not super emotionally connected to romantic relationships.”

But it isn’t all about sex.

“What I love about Micah [is] we get to see a journey of identity,” Sheng says. “I love that we get to go on this ride of queerness with him. To be a young trans person who is also Asian, I know that I’m young enough to really figure out life, and the thing with Micah is that he’s young and he’s figuring out his life.”

Sheng looks forward to what’s ahead for Micah. “There’s so much I don’t know about him and so much I’m learning,” he says. “I want to see more of him in his element and in his body and in his spirit.”

Looking back at the original run of “The L Word,” the series faced criticism for its lack of diversity in its cast, particularly the lack of trans and gender non-binary characters. “Generation Q” is consciously more inclusive.

Sheng says there is value in bringing unrepresented voices into the process.

“There is a lot of power in having trans folks be in the writers’ room and have a hand in creating those characters,” he says. “That’s a big piece of what’s different [from the original series].”

Sheng notes that hiring trans writers and actors results in more authentic representation. “There’s a level of understanding that I think trans people can bring to stories about us which is otherwise posturing or guessing,” Sheng says. “When it comes from someone who has actually lived it, there is a level of authenticity there.”

Overall, the feedback Sheng has received about his role has been positive. “The majority of the messages are from other trans folks or family and friends of those trans folks who are extremely grateful that these stories exist and [that they] get to see these stories on screen.”

“One thing we have to be proud of, and [that] I am amazed about,” he says, “is the resilience and the ability to keep existing in this world.”