At UWM, the Bottom Line Matters, But People Matter More

Casie Jones, a leadership trainer at United Wholesale Mortgage (UWM) in Pontiac, is a straight shooter with a single-minded goal: fostering a truly diverse, equitable and inclusive work environment through education and awareness.

“Diversity is huge here,” she says. “And we promote it in our culture.”

Before making the transition to her position as a leadership trainer, Jones spent time working on UWM’s Resolutions team, gaining experience that informs her new role.

It all started when Jones responded to a call for team suggestions about how UWM could improve its Diversity, Equity and Inclusion (DEI) efforts. Her idea was simple, but impactful — why not raise the rainbow banner in support of the company’s LGBTQ+ community? “My idea was centered around awareness and looking for allies,” she says.

Soon, Jones was invited to join a UWM Leadership Development team committee focused on creating inclusivity through outreach to internal team members. As Jones found herself planning events and building relationships throughout the company, she realized she wanted to do this kind of work full-time. “I found my passion,” she says. As soon as a position opened up on the Leadership Development team, Jones went for it.

These days, it’s clear that Jones’ passion has yet to wane. “I love what I do,” she says. 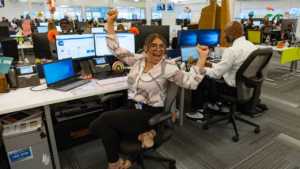 The UWM slogan “Be You Here” provides the framework for the environment Jones is building. “It means something special to everyone,” she says.

For Jones, one aspect of being her true self at work means feeling comfortable acknowledging her girlfriend Tiara Saunders, a UWM senior underwriter. “I identify as a lesbian, and I can openly say that here,” Jones says. “I can bring my spouse to functions, I can introduce her. I feel loved, respected, and my family matters; my family’s family matters.”

Jones has firsthand experience working for employers who were not as tuned-in to the vital importance of DEI. “In a previous workplace, it was a great place to work, but there wasn’t much diversity,” she says. “It definitely was not a place where you could openly be yourself.” She says it wasn’t surprising her previous work environment, where she first met Saunders, felt restrictive — she cited a recent study that showed around 46% of U.S. LGBTQ+ employees feel closeted at work.

Feeling forced to stay in the closet at work “takes a toll on your mental health and mindset,” Jones says. “We spend the majority of our days at work, so it’s crucial that we create a safe environment that supports who people are.” She says she works to ensure that UWM team members feel comfortable discussing their partners, that their preferred pronouns are acknowledged, that everyone feels safe and protected, and that no one needs to constrict who they are.

Jones says she is driven by making sure every team member feels heard and seen — that their culture matters and that they feel valued. “It’s not just lip service,” she adds. The company encourages team members to take a  “Be You Here Day,” additional PTO that’s dedicated to celebrating or observing dates important to them that may not appear on the list of federally observed holidays and remembrances. Jones says she used a Be You Here Day to celebrate Juneteenth this year.  Throughout the year, the company recognizes cultural observances through internal announcements and in-person celebrations.

Jones’ approach to training leaders about how they can create more diverse, inclusive work environments is one she hopes team members will carry over to their personal lives, as well. “It’s about the whole person,” she says. Providing leadership classes on important —and sometimes, sensitive — issues is one way Jones reaches out to the UWM community.

A key example is her work educating team leaders about unconscious (or “implicit”) bias — commonly held social stereotypes focused on certain groups of people that individuals form outside their own consciousness. Jones says that when we are aware of some of our own unconscious biases — everyone has them — we can work to overcome them and keep them in mind when developing relationships inside and outside of the workplace. “Unconscious bias training helps us to make better decisions,” Jones explains. “It helps us to treat one another better, creating safe spaces for everyone to feel supported, protected and heard.”

Classes aimed at “opening the mind to different perspectives,” she says, help to drive awareness about diversity and inclusion in the everyday actions we all take part in.

A Day in the Life

A typical work day for Jones revolves around applying the best techniques to build leadership abilities. She leads interactive boot camps for new leaders to prepare them to coach their team members. “Throughout this training, we make sure we’re putting a huge emphasis on relationship building,” she says. “It’s a family-oriented culture here and concepts like ‘servant leadership’ are important.”

Connection is at the heart of UWM’s approach toward fostering an inclusive workplace and building strong teams. Jones says she and her teams are always working toward making more personable, relatable connections — “It’s helpful when team members can think of their leaders as more than just their bosses,” she says. Incorporating storytelling as part of the company’s leadership training initiatives helps to connect those dots. “We focus on storytelling because it’s part of building relationships and it’s part of understanding on a deeper level,” she explains.

“It’s about figuring out the ‘Why.’ I can tell someone you have to buckle your belt, for example,” she says, “but if I tell you a story about why it’s important, you’re more likely to resonate with that and feel more inclined to buckle up.” Teaching about emotional intelligence, empathy and caring help leaders understand team members at a deeper level.

Jones spends a good deal of her time reaching out to leaders individually, letting them know she’s a person who can help if they are feeling overwhelmed. She also shares resources like webinars and podcasts, some of which can be accessed through the company’s Diversity and Inclusion Academy, a storehouse of D&I resources for leaders and team members.

While working for a welcoming, inclusive company is perhaps the biggest “perk” UWM offers, Jones says she appreciates a long list of benefits the company offers like an on-site gym and the Uperks program that gives team members discounts on things like doggie day care, childcare, concerts and more.  “I also love the campus itself,” she says, “especially bike riding.” With a campus that sits on 200+ acres, there’s plenty to explore.

Jones says UWM goes all out during the holiday season, hosting huge holiday parties featuring national acts like the Chainsmokers and Ludacris. This particular perk might seem like reason enough to stick around for a while, but UWM is focused on more than “a while.” The company strives to create a hire-to-retire employee life cycle. Though she’s been at UWM for just two years, Jones says she can “100%” see herself retiring with the company.

Reaching the 10-year mark is one of the first big goals that UWM rewards as an incentive to encourage team member loyalty. When team members reach their 10th anniversary with the company, they receive an additional 10 PTO days and $2,500 to “live their dream.” Jones says team members look ahead to this milestone with anticipation, with some investing the money and time into vacations and others investing the time and money in different ways. “It’s for whatever you choose,” she says. 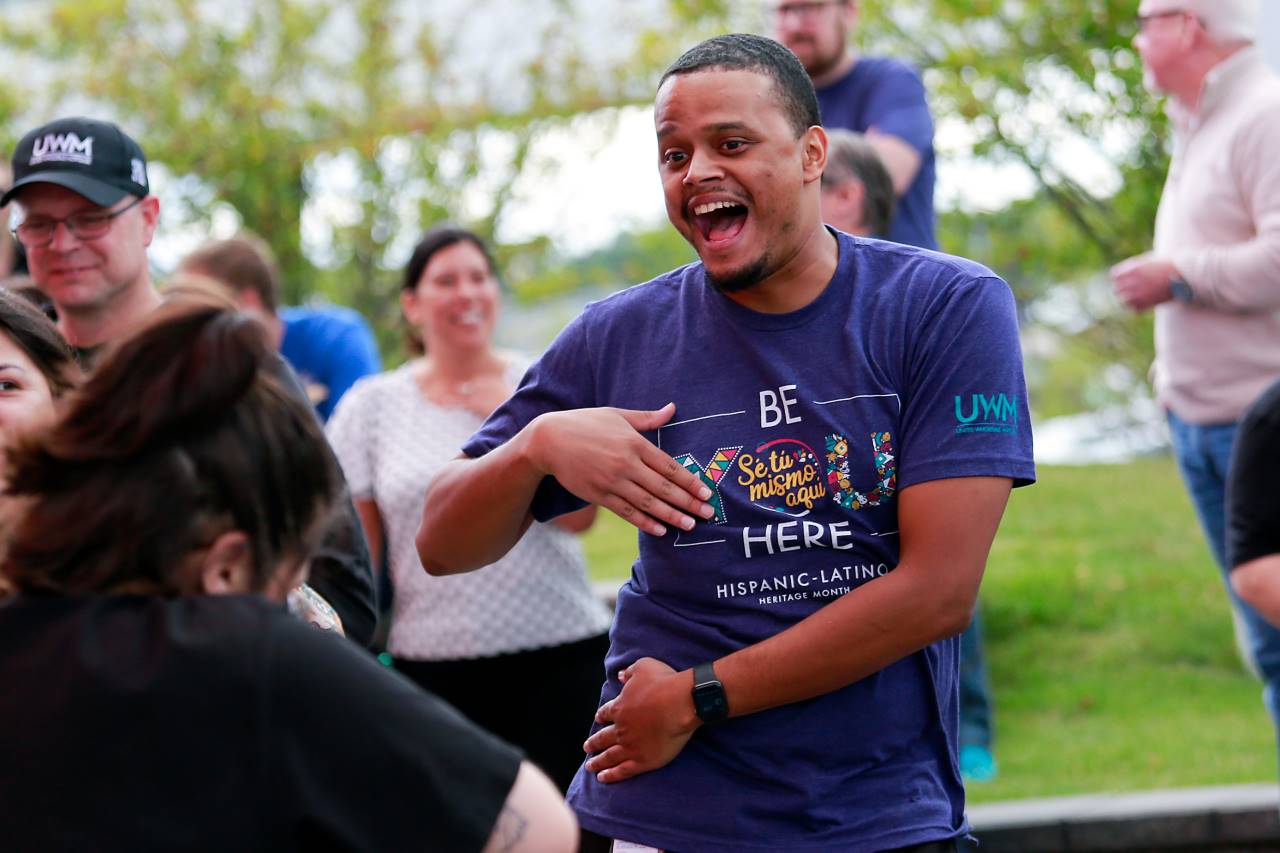 Jones plans to keep building on the foundation she and her teammates have been building. She says the company is responding to requests for more representation and awareness about specific cultures, ethnicities and backgrounds.

To that end, the team provides educational “culture posts” that focus on groups like veterans and supports a variety of resource groups, including a Black team member group and a Latin American/Hispanic group. That awareness has also spread into the diverse fabric of team members, who on any given day can be spotted sporting one of the company’s “Diversitees,” a collection of shirts that celebrate and support the cultures and observances that are important to team members with proceeds going to select charities. “It all starts with education,” she says. “The more people are aware, the more diversity we see, and the better off we all are.”

Above all, Jones says her work will continue to center on issues beyond numbers and production. “These things matter, of course,” she says, “But people matter more.”

This  article is sponsored content and created independently of the editorial team.