Detroit’s Getting a Lot More Violet Chachki: How the ‘Drag Race’ Winner Finds Power in Performance

It takes a preternaturally confident kid to read a homophobic slur about themselves and think, “Oh my god, people are talking about me.” Especially while standing at a urinal in a Catholic elementary school.
But most queer kids don’t grow up to be Violet Chachki.
That story, which Chacki shared with Teddy Quinlivan on the latter’s inaugural “Unholy and Curious” podcast earlier this year, came in response to the question, “What was it like growing up as the biggest homo in Georgia?” As their smile eventually gives way to laughter, the “RuPaul’s Drag Race” seventh season winner tells Teddy, the first openly trans model hired for a Chanel beauty campaign, that seeing the words “DARDO (Chachki’s legal surname) IS A FAG” made them “feel really special actually,” which to them meant “people are obsessed with me.”
They weren’t wrong, then or now, and that certainty of self is what likely caused some of their fellow Season 7 cast mates to vote Chachki “Shadiest Queen” during the DESPY Awards episode. Their aplomb, when mixed with an encyclopedic knowledge of fashion iconography, mad runway skills and a silhouette often punctuated by a near-microscopic waist, made the then Atlanta-based queen a formidable competitive force, one which intimated some and angered others. Katya, with whom Chachki was paired in the Prancing Queens challenge during their season, called the younger queen “the most visually intelligent person I know.” 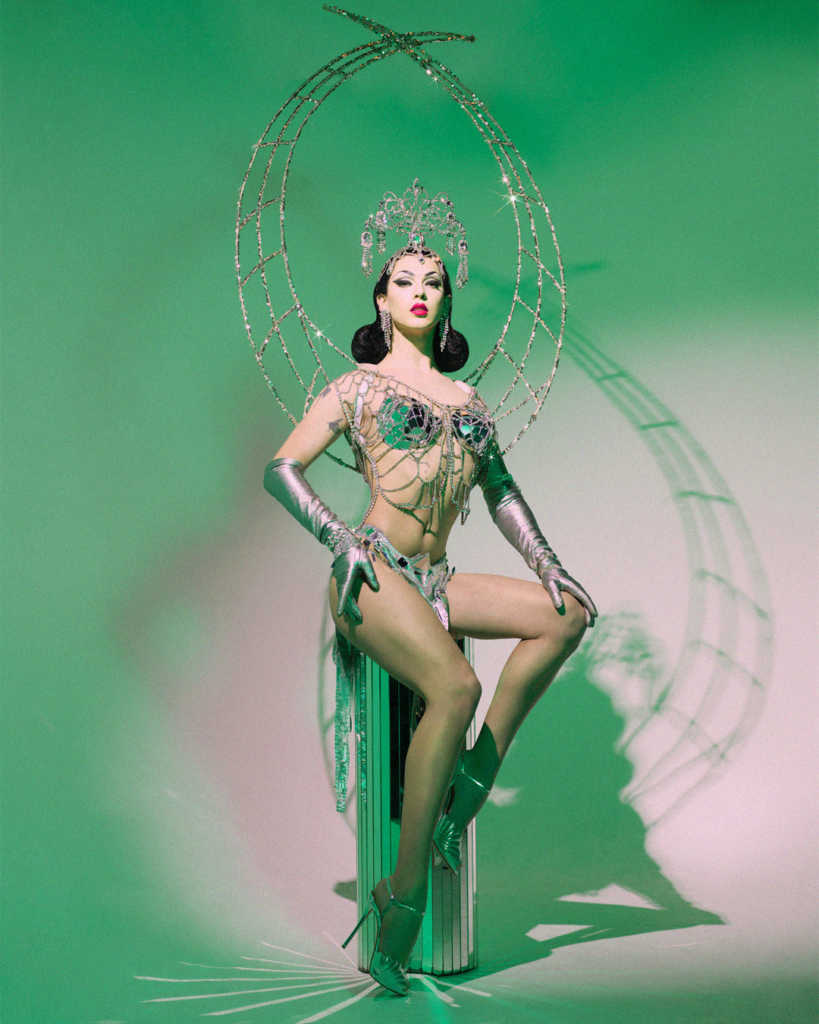 Chachki was raised in Atlanta, where they performed at the Jungle, a now-defunct gay club, before appearing on “RuPaul’s Drag Race.” Although they began a fashion design program at Savannah College of Art and Design, they later dropped out to focus on drag.
The queen may have left college, but the lessons learned remained. Just as likely to discuss subverting the binary — genderfluid, Chachki uses she/her and they/them pronouns — as they are to chat about post-Pride partying, they indeed embody a thing of beauty that folx hold dear.
Coming from a legendary drag epicenter pushed the multi-hyphenate to make their current show, fittingly named “A Lot More Me,” just that: a equally hyphenated extravaganza that includes not only fashion and burlesque, but highlights their aerial acrobatics as well as stand-up skills. Detroiters can see it all come together when Chachki performs the show Aug. 21 at Sound Board at Motor City Casino and Hotel.
“Some nights, I come off stage and my crew says, ‘You are so funny!’ and I think ‘I’m hilarious!’ and it all works,” Chachki tells Pride Source. “Other nights, it just doesn’t. But that’s why (the show) is always evolving. I’m making adjustments daily. But why not try it? I’m not saying I’m a comedian; it’s not a stand-up show. But my sense of humor is part of the process.”
They cite audience reaction, here at home as well as abroad, for the significant influence it has on content. European audiences are “easier and more forgiving” than their American counterparts, says Chachki. They see the difference in the way Americans consume drag as both a readily available commodity and an omnipresent cultural influence. Fans outside of the Americas don’t have Atlanta or New York or Los Angeles and the respective collection of drag styles with which to engage; they’re “happy to see a show.” U.S. crowds, however, are “more critical, but that’s what drives me to make changes. Well, that and me being me.”
During their season, Chachki’s wins bookended a season that they, along with others, see as a sort of “beginning of the end.” Being crowned Season 7’s winner has Chachki squarely in the middle of the at-present 14cycle franchise that’s been on three networks, spurred countless spin-offs and international versions, and seen its queens go on to intercontinental tours, haute couture runway walks and beauty campaigns, and first-ever appearances at legendary events, such as Chachki’s 2019 Met Gala attendance, alongside RuPaul and Aquaria. 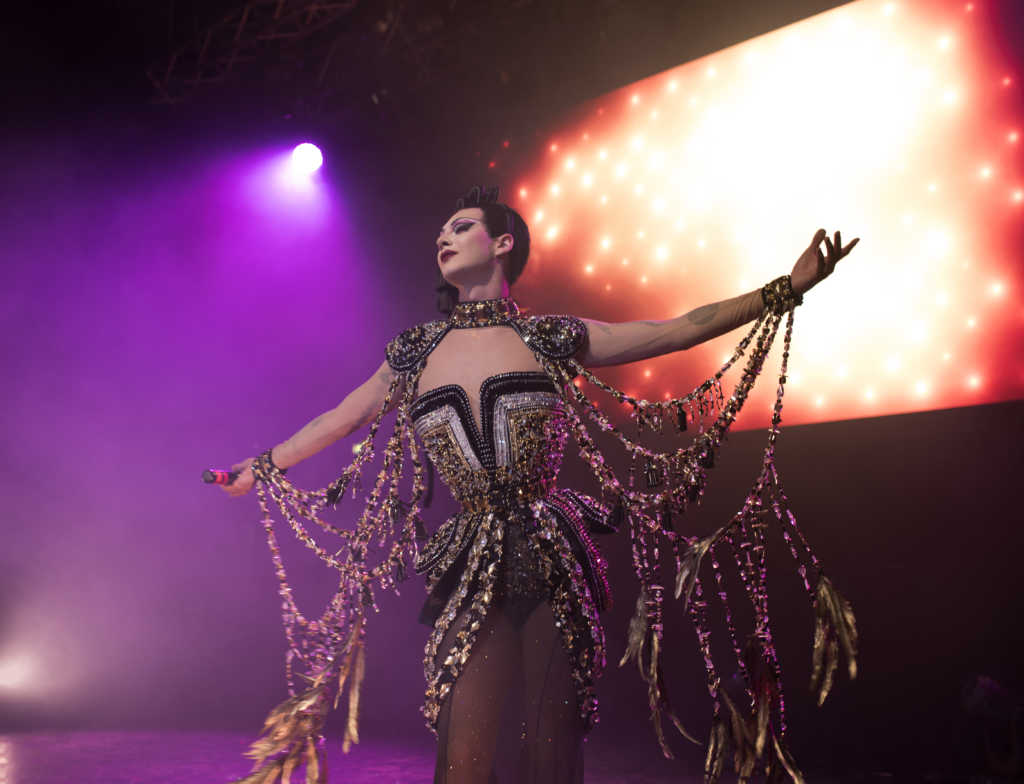 As someone who acknowledges the influences from which they pull, including mid-20th-century Hollywood glamour, Irving Klaw’s paradigmatic fetish photos of Bettie Page, designers like Christian Dior and Thierry Mugler, and femme style icons from Raquel Welch to Deee-Lite’s Lady Miss Kier, Chachki recontextualizes to create their seamless aesthetic signature. One that, as they and Teddy conferred back in February, “leaves no one out” in the LGBTQ+ lexicon. It’s here, as they discuss and at times defend their being, that their trademark confidence is writ large.
The misinterpretation of their boldness as brash conceit, on the walls of a school bathroom, in the RuPaul workroom, or in the greater world, is what Chachki views as the flawed binary coming to the fore for femme-presenting people. “If a man is assertive, speaks his mind, asks for something in a straightforward way, he’s praised. He’s fulfilling his masculinity,” they tell Pride Source. “If a woman does the same thing, states the same wants and needs, she’s demanding; she’s a bitch; she’s cunty. I want to be part of changing that.”
Being seen as a termagant has proved problematic for femmes, but Chachki derives power from spaces others might find painful, drawing intersections between fashion and bondage, Catholicism and liberation, bullying and adulation, all of which reminds them that the “special” treatment they’ve received is often couched in the complex emotions of others – confusion, frustration, and ultimately admiration. In “A Lot More Me,” Chachki is serving a signature performance art cocktail of élan, one that amuses as it empowers, upending gender norms along with notions of what drag was, is, and may be.
“I felt special most of my life and, in a lot of ways, especially when I was younger, still in high school, people treated me the way I felt,” Chachki says. “After 2020, not just with the pandemic, everyone needs to feel special. Escaping to beauty, to fashion, to feast visually, to laugh, we all need that and that’s what I’m here to bring.”

About the Author: Chene Koppitz

Michigan native Chene Koppitz has lived all over the world but loves calling Detroit her home. She's partial to anti-racist folx, feminist theory, mid-century design, high camp, low art, and puppies, hers and everyone else's. Feel free to discuss these subjects and more with her at [email protected]