In early 2022, Michaela Jaé Rodriguez made history as the first openly trans actor to win a Golden Globe, an award she earned for her role on “Pose.” Nearly a year later and she’s yet to properly celebrate that groundbreaking moment for herself and the trans community, she told me during our recent interview.

And it’s not just because she’s been busy bossing around Maya Rudolph in the Apple TV+ sitcom “Loot,” which was recently renewed for a second season. Rodriguez assured me she’d pop open a bottle of bubbly soon, but not until she was done with her ambassador duties for Citibank, which recently expanded its transgender-friendly chosen name feature to debit customers, allowing eligible Citi cardholders to update their cards with their chosen first name without requiring a legal name change.

In our interview, Rodriguez chatted about her own chosen-name experiences, her upcoming foray into music, and why “Loot” was such a “glorious surprise.”

Why was it important for you to get involved with Citi’s chosen-name campaign?

It was most important to me [because of] the youth. I think about their level of confidence when they receive something that they’ve always wanted. And I also think about just trans individuals in general, regarding who they are and their identity, how that’s most important to them. Knowing that Citibank was willing to partner [with me] was not only, I feel, outstanding and kind of an honor, but to know that they’re willing to make sure we feel protected in ourselves and our identity. Also, they’re not slow in the process because they make it happen at the drop of a dime. There’s no long hauling to giving your information and giving all of this documentation that is quite embarrassing. You don’t have to go through that process.

So thinking of all those things, and regarding the youth as well, and just trans people in general, that’s why I partnered with them. It’ll give them a peace of mind. And they can walk out and know that not only they have a card that they’re going to be using, but a card that represents the name to their identity.

Growing up, what was the thing for you that had your chosen name on it that meant the world to you?

I was 11 years old and I was in a music program, and I remember my dad taking me to go see “Spider-Man” with Tobey Maguire and Kirsten Dunst. And I remember they calling her MJ. And I was like, “Oh my god, those are my initials.” I wanted to be called MJ because she’s really cool, and she’s quite fab, and I love her red hair.

I remember receiving my first Equity card and them saying, “What’s your stage name?” And I said, “Well, it’s MJ Rodriguez. I’ve been called MJ all my life. That’s my name.” And they were like, “OK, perfect.” And from then on it stuck. Then, obviously, growing older, becoming a grown woman, you’re like, “OK, those little girl days are gone. People need to know who Michaela Antonia Jaé is. Who the creative artist is.”

The significance of Michaela is people getting to understand who the person is outside of the actress MJ Rodriguez. Michaela Jaé is my artist name. I wanted people to see the differentiations. I didn’t want them to stronghold me to just one character, but a multitude.

What are some of the challenges you’ve run into with changing your name?

I mean, there’s always a worry or a setback on the documentation and giving your dead name when you don’t want to give your dead name. All of these lawyers that I feel aren’t [necessary]. But yeah, I’ve gone through that, but it also didn’t deter me. It didn’t make me sad, it didn’t break me down. It just kind of pushed me a little farther.

Recently, we’ve seen a wave of anti-trans legislation, much of it focused on chosen names. What do you have to say to school administrators and politicians who’ve made it difficult for trans students to change their names and pronouns?

More than anything, I would say they need to probably open their minds and, even though they may not even receive a message like this, to open their minds and dig a little deeper into the actual human being that is there, beyond your expectations or your stigmas and ideas of who we are as people. I think what most importantly needs to be broken down is how we are as human beings and how we move. I would say just pay attention. If I were the person to give them the energy of anger, that would defeat the purpose of love. But I would say the disappointment that I have, as well, is needed for every trans person and every person who is an ally.

Regarding your Golden Globe — do you carry it everywhere you go?

[Laughs.] Believe it or not, and I always say this to everyone, but I’m a regular shmegular girl, but I still have it in my case. This may be TMI, but I don’t know if I’ve actually yet really celebrated that moment of winning it. I know it’s weird to say, but I probably need to do that.

I’d say that celebration is overdue.

Yeah, it definitely is. It’s a process. It was a lot that I had to process when I won that Golden Globe. I was so, so happy. But I also felt like I didn’t deserve it. But that’s due to, I guess, the shame, and what comes with transness in the industry, and how you feel you fit or how you belong. And when I got that, I was like, “Oh my god, does this mean I truly belong?” Maybe even worse, I was wondering, “Am I deserving of this?” And I had to really take the moment, and I’m still obviously in that space. Don’t think for a second, though, that I’m not proud of myself for winning because it was a feat for so many girls who have not had space. It opened, hopefully, a good amount of doors, but also what comes with that is my reality. 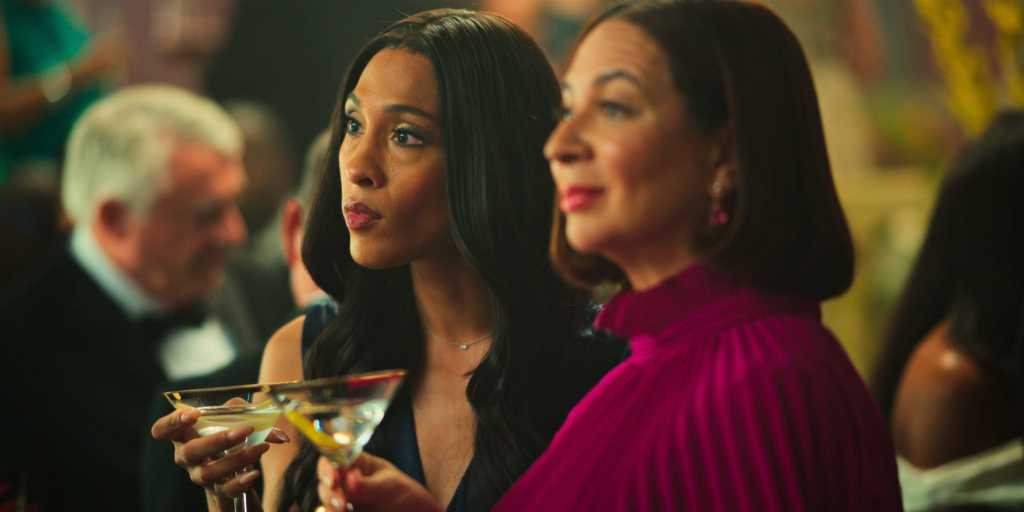 I want to ask about your role on “Loot” as Sofia Salinas, which feels groundbreaking because it’s not about being trans. I read that you decided that the character would be trans, but it wouldn’t be a primary characteristic. Why was that important to you?

Being cast on this show, just a general role, was such an amazing moment in my life. I did not expect it. I did not believe I was even capable of getting that. Again, this was a totally different lane from what I am used to. I’m a drama girl, and being thrust into comedy in the most beautiful way was such a glorious surprise.

So being trans, I didn’t want people to just subject her to transness. People know me as Michaela Jaé, as a trans woman in the world. So being in that role of a woman who could possibly be trans or cis, it really bridges the gap between what actually we all go through as women, aside from being marginalized as trans. I had a show [“Pose”] where it showed the true experience of what trans women go through and I wanted, now in this moment, to try something different, make people laugh, and also let them see the struggle of not only just trans women, but cis women in general, and women in general. How we grow, how we fight, how we strive. And Sofia — she is starchy and real stiff, OK? That is just not Miss Michaela. I love the crap out of her. I love that she’s this way. You need someone like her in your life. So I’m just like, she helps me. When I read the script, I was like, “Damn, sis.”

There’s a lot you could influence in the coming years. Have you thought about that and where you want your career to go from here?

I’ve continued to pursue my acting career, but I also am really excited for my music career to start fully next year. I promise it’s something that… well, I think it will be good. I promise I’m not biased.

You released the single “Something to Say” in 2021, so a full album?

Well, I don’t think it’s going to be a full album. I’m going to do an EP, just to give people a snippet and see if they like [it], and then start writing more. Because my fans are really important. I really like having my hand in being creative and having a say.