At times figural and at others completely abstract, the work of openly gay artist James C. Harrison is hard to classify. So much so that even regular patterns in his pieces take on different feels depending on the work — but that variability of style might just be part of Harrison’s genius. Elizabeth O’Connell, one of the curators of Harrison’s work at the Schmidt’s Antiques auction house, said that it makes him “a fascinating guy to study.”

“We essentially have 50 years of his work and he has these recurring symbols, but you would think they were all done by a totally different artist,” O’Connell said. “The draw for us with Harrison’s work, and other past reviewers throughout his career, is that he’s got this amazing sort of Detroit grittiness about him that is prevalent throughout all of his work. But we chose specifically to go with a more comprehensive timespan.”

The earliest work featured in the exhibit is from the 1940s up to the late ’80s near the time of his death. Harrison’s work, along with that of fellow Detroit-born modern artist Darin Latimer, will be available for public viewing every Saturday now through the end of August at Schmidt’s. The exhibit is called “Imaging Each Other.” 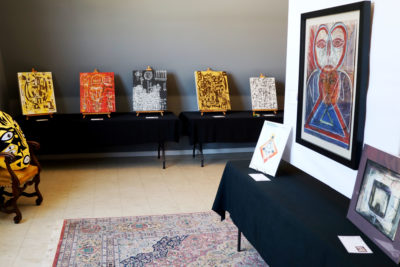 “[The title] fits on multiple levels and it fits really well with the relationship between the two artists’ work,” O’Connell said, referencing their similar styles. “Darin … became a professional artist based on his inspiration from Harrison’s work.”

And the title itself came from one of Harrison’s works. Harrison was known for meticulously revising and annotating his works as well as providing detailed titles to his pieces.

“… The titles being these kind of cutting, almost soundbites. And it’s a dream come true if you’re trying to think of a title to go through his work,” O’Connell said. “He just has this kind of searching rawness about his work that reflects both the Detroit Jazz scene, the Detroit art scene and as well as his own personal life.”

O’Connell added that Harrison is a rare example of a mid-20th-century artist who openly explored his sexuality throughout his works. 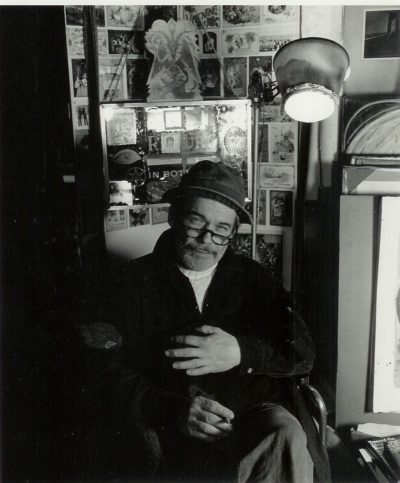 “In my experience, he is a bit of a rarity in that sense. It works with his seeking out for the truth within himself and his own identity outside of his sexuality and the fact that he’s so willing to express his sexuality in this way,” she said.

For those interested in viewing the exhibit, O’Connell’s advice is to take a while to really ingest the varied meaning behind each of Latimer’s and Harrison’s works. Regarding Harrison’s pieces in particular, paying attention to the time period in which each work was created is important as the exhibit features works of his from his time in Detroit, his time entering the New York art scene and his most prolific period in the ’80s.

“It’s an exhibit that ideally people should take a lot of time to go through,” she said. “It’s very cerebral and very layered and it’s easy to see it as something that almost looks visually cacophonous at times, but it’s all very intentional and it’s all very rich in depth.”

To find out more about the exhibit and how to purchase works visit the Schmidt’s Antiques website.