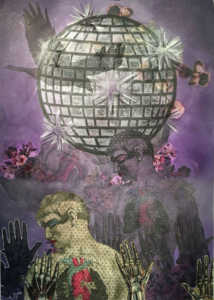 Like so many in the LGBTQ+ community, Ann Arbor-based artist John Gutoskey didn’t need a personal connection to the 49 victims of the Pulse nightclub shooting to validate his profound sense of loss in the months following the tragedy.
And as so many great artists do, Gutoskey wielded his pain and threw it onto the canvas. This weekend marks the opening of the artist’s latest exhibit “Pulse Nightclub: 49 Elegies” inside Ypsilanti’s 22 North Gallery, which Gutoskey describes as a series made to commemorate each of the 49 people massacred in the Orlando club nearly two years ago.
“When I heard about the massacre, I felt shocked and couldn’t even formulate a verbal response to it,” Gutoskey told BTL. “I decided the honor the victims with a monoprint for each one of them.”
The 49 monoprints – or “single prints/copies” in layman’s terms- are not paired with the names and faces of each victim, Gutoskey said, but rather are representative of queer politics, values and ideas as they relate to the Pulse tragedy.
“I worked with different images to talk about queerness and that event, to talk about the idea that a gay nightclub is like a temple, church, and sanctuary for queer people,” he said. “My response was as if this attack happened at a church or a temple. These clubs are our safest spaces, a place you can be yourself and not fear for your life or be assaulted verbally or physically.”
“It felt like a sacrilege to a safe space.”
“49 Elegies” incorporates images of robins and ravens that represent values within the queer community. Robins symbolize the community’s sense of compassion, Gutoskey said, a trait the birds showcased in Biblical stories where they pulled thorns out of Jesus Christ’s crown.
Ravens, on the other hand, are the outsiders. “Ravens are like queer birds,” Gutoskey said. “Signs of a bad omen, considered outsiders, and they love sparkly stuff.”
“Ravens are known to line nests with broken jewelry or glass,” he continued. “These are queer material, like glitter. I started working with those images, the nest being like a home, and the images of eggs like life, and then added nightclub images.”
Gutoskey also made sure to incorporate symbols of Florida (fruits, warm colors, seaside tones) as well as those of Puerto Rico and Cuba, two countries that several of the Pulse victims called home. The final collection represents six months of hard work, a time in which Gutoskey also utilized to place himself in the mindset of both victims and survivors.
“I tried to put myself in that space, looking at it through different lenses to feel what it was like to hear shots and friends dropping,” he said. “To be outside the club, a family member, or someone in the club.”
While Gutoskey has chosen to call his monoprints “elegies,” he notes that the exhibit was created to encompass so much more than just feelings of grief.
“An elegy is like a lament and grieving for people who passed, but this also incorporates praise and admiration for lost people,” Gustoskey said. “Each print represents a person killed, but there’s also a sense of lifting them up and trying to console the people that are left behind. They’re not morbid. I’m not trying to make them morbid. They’re something beautiful and engaging that tells these stories through the symbols in the work.”
The exhibit is scheduled to run until June 30 for the entirety of Pride Month.
In addition to the 49 monoprints, attendees are also invited to take part in a guided meditation session at the gallery on Tuesday, June 12, the two-year anniversary of the Pulse Nightclub shooting. For more information about the exhibit, please visit 22north.org.