In an instant, a snap judgment can change everything. And if it’s a negative one, the results can be devastating. In the case of Kiri Stewart, an openly transgender woman, an angry reaction to her gender identity could mean bodily harm. So, for her, hypervigilance is often a necessity. That’s why when she went to Flagstar bank to apply for a mortgage, she steeled herself for the worst.
“I got all of my information gathered, all of my reports and bank statements and everything, and I took it to Flagstar,” Stewart said. “Well, of course, all of that stuff is under my previous name. It’s all the things I’ve accumulated over my life, which has only pretty recently changed. So, I was very nervous about going in there and having to apply for a mortgage and then, basically, being forced to come out during that process.”
Stewart’s assigned loan officer was Assistant Vice President of Sales Kim R. Kretowicz. Stewart said she felt a bit of relief when Kretowicz immediately referred to her as female, but began to hold her breath again when it came time for her to present her driver’s license; her gender marker and previous name had not yet been updated. But Kretowicz “didn’t miss a beat.”

“They gave me acceptance and helped me find a home, which I think are two of the greatest gifts a trans person can get.”

“He looked at it, made the realization in his mind what was happening and he typed it into his computer, and then he asked me how I would like to be referred to,” Stewart said. “He said, ‘So, I see that this says your legal name. Would you like to be referred to as Kiri?’ I said yes, and for the rest of the time he just did it; correct pronouns, everything. There was no teaching moment, there was no adjustment period or whatever. He just dropped right into it like it was nothing, and it made me feel so good. It made me feel so normal [laughs], which is unusual sometimes for trans people.”
Even though he temporarily had to use Stewart’s previous name for the loan application, she is now the proud owner of a home with the correct documentation. According to Kretowicz, he just wanted Stewart to feel comfortable during the process and was surprised when she became visibly emotional.
“Kiri definitely was attired as a woman with a handbag and makeup and knowing she was a woman, I said, ‘How do I address you on the loan application because I have to enter male or female to run the credit report?’ That’s when Kiri really just broke down crying, and she just said, ‘Thank you, thank you, for recognizing that I’m transgender in the midst of changing things,’” Kretowicz said. “I didn’t think anything of it.” 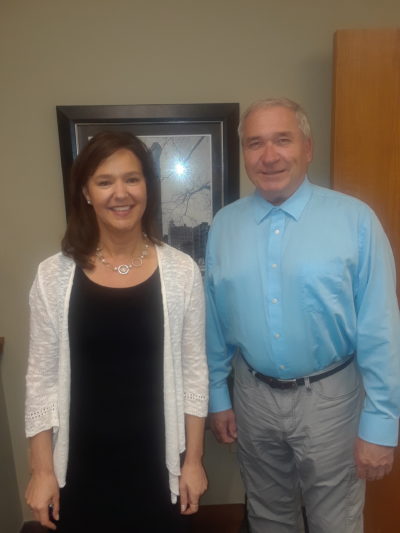 Kretowicz then brought in Alison Evanzo, a relationship banker at Flagstar, to explain some of the bank’s other services. She, too, made Stewart feel at home.
“I really enjoyed Kiri and I just treated her as a human being, as I would want to be treated,” Evanzo said. “Actually, for me, I’m thrilled that people have choices and an accepting society where people can evolve and become who they want to be.”
Stewart went home relieved and felt compelled to share her story on social media. She made a Facebook post and it gained so much traction that it even caught the attention of Flagstar’s CEO Alessandro P. DiNello.
“I think the experience Kiri had at Flagstar is a real-life example of how everyone wins in an inclusive environment — employees, customers and the community. I’m not sure I can say that the outcome for Kiri would have been the same if Flagstar had not put D&I (diversity and inclusion) front and center as a company,” DiNello wrote to BTL. “In this case, our customer belonged to the LGBTQ+ community, but she could just as easily been part of another group that some label as ‘different.’ Kiri is now busy moving into her new home, which means we have a satisfied customer. And how is this good for the community? It has a new homeowner.”
Now that she’s busy settling into her home, Stewart said that she’s looking forward to being a homeowner.
“When you start getting pieces of paper with your name on them, it feels amazing. And now, to have my own home, with the mortgage in my name is one of the best feelings in the world,” Stewart said. “I’ve had some bad experiences being trans with service professionals, too, but my experience of being seen, respected and I think genuinely cared for by Alison and Kim at Flagstar is one that I will never forget. They gave me acceptance and helped me find a home, which I think are two of the greatest gifts a trans person can get.”
DiNello said that Flagstar will continue to work to maintain its inclusive environment to ensure that all future interactions with the LGBTQ community and other minority groups go just as smoothly. Just last Wednesday, Aug. 29, the company kicked off its portion of the “Check Your Blind Spots” tour. It’s an event that is part of a national coalition called CEO Action for Diversity & Inclusion in which hundreds of executives seek to create an environment where acceptance is a main focus of company culture.
“We are constantly looking for opportunities to reinforce Diversity & Inclusion as a cornerstone of our culture,” said DiNello. “This program is just another step toward cultivating a workplace that supports an open dialogue on complex, and sometimes difficult, conversations about diversity and inclusion.“
To learn more about Flagstar Bank’s diversity and inclusion efforts click here.