One look at The Bearded Lady’s waiting room – a bright, cheery space complete with a beer fridge, coffee maker, bookshelf, standing lamp and a backdrop of family photos – and visitors might think they missed the barbershop and stumbled across someone’s living room. Ash Hipps is the shop’s owner. She said that’s exactly how customers are supposed to feel because comfort for all is the shop’s priority.
“I just wanted to have a place where everybody felt welcome, where no one felt weird,” she said. “Because I’ve both worked in salons and attended them, I know it could be very uncomfortable for people. I could get that read on people.”
And the shop certainly draws a collection of diverse clientele. Something in which shop employee Vanu Gant takes a lot of pride. Unlike a more traditional salon, Gant said she sees about an equal amount of women as she does men.
“We have all types of these blue collar dudes, and they could be sitting next to someone who (has) got lime green hair, 10 piercings and a mullet,” Gant said. “And we would all get into conversation.”
In fact, the opportunity to service a community with a diverse clientele is what drew Hipps to the Detroit area. Before opening The Bearded Lady, she worked to cultivate a strong network of customers through a variety of odd jobs in the area.
Many of these were pop-up events, she said, which involved Hipps setting up her own haircut station at venues like farmers markets, block parties and various Detroit businesses.
“If there was an opportunity to take, I took it, no matter how weird it was,” she said.
Hipp’s setup was not unlike a rock band travelling with stage equipment from one gig to the next, but instead of guitars and amps she unpacked a minisalon.
“I’d lug around a whole station,” she said. “I was loading it and unloading it, not having running water and having to cut hair in terrible lighting and borrowing lamps. It was fun, and I’m glad I did it. … it helped build my confidence.” 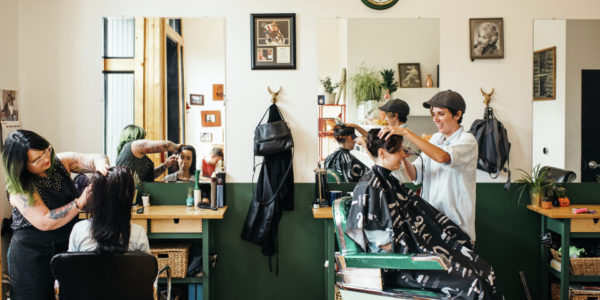 “Warm,” “laid-back” and “friendly” are the words she uses to describe the Detroiters who she met while travelling with her haircutting station around the Metro area. Those are also the adjectives she hopes that current customers will use when describing The Bearded Lady today.
Perhaps some of the reason that much of Hipps’ focus is on a welcoming salon is because it was her family’s business, too. Much of her childhood was spent helping her grandmother and aunt’s salon in Flint.
“They always had me in there ripping foils, sweeping, folding towels,” she said. “It was a just a part of our family. Someone was always getting their hair done – it was a family activity. … My aunt would be doing my mom’s hair, my hair, my brother’s hair and my uncle’s hair all at the same time.”
Hipps said that bringing a similar familial, laid-back energy to The Bearded Lady goes against the grain of many of the salons outside the Detroit area. And Hipp does include many personal touches in the way she runs her shop. For instance, it’s not uncommon to see Hipps’ social media posts of her dog Bernie – aka the shop’s unofficial canine mascot – hanging out with her at work. Observant customers will also notice a possibly abnormal amount of memorabilia from Hipps’ all-time favorite TV show, “The Golden Girls,” strewn about the shop.
“I have loved ‘Golden Girls’ since I was little,” Hipps said. “My mom always made fun of me, saying, ‘Why do you like that show about old ladies?’ I don’t know. … It’s always been comforting to me.” 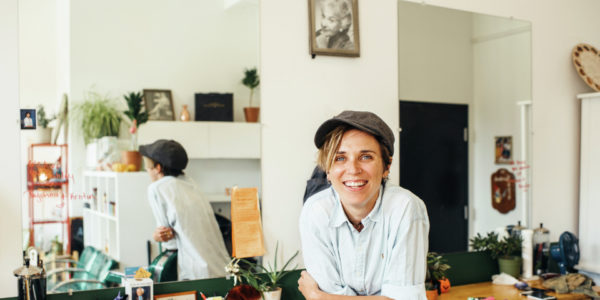 “Bea Arthur always reminds of my grandma,” she added. “The savviness, the personal style, the hair — everything about her reminds me of Bea Arthur.”
Quirky decor aside, Hipps’ shop stands out in another way, too: pricing. She said that it’s her belief that the cost of a haircut should be measured by length, not gender.
“I wanted to make sure I opened a place where people who could afford to get a haircut regularly could get them more frequently,” she said. “And for the people who have a problem affording a decent haircut, placing them at a price they could access.”
Accessibility goes beyond just pricing, though. As a member of the LGBTQ community, Hipps understands firsthand how tricky it can be for someone to request a haircut that falls outside societal gender norms.
“My aunt cut my hair most of my life, but when I lived out of state or just couldn’t get home and I needed a haircut, I went to other salons,” she said. “I’d end up paying 60, 70 bucks for a haircut with these weird flourishes I didn’t ask for. It’s not reflective of my style, or how I prefer to look. They weren’t paying attention, and just wanted to make sure I looked like a girl.”
That’s why Hipps is adamant that she’ll stick to the styles that customers request.
“If someone comes in and say they want a short haircut, or understands they want a classic fade or something, I’m not going to shy them away because I think it’s more feminine to do something else,” she said.
That fearless approach to unconventional style — especially where it concerns gender presentation — is where the shop gets its offbeat name, too.
“It’s a play on gender and gender roles,” Hipps said. “If you’re a little strange, you can come here. There’s a little bearded lady in everyone.”
The Bearded Lady is located at 1701 Trumbull Ave. in Detroit, Suite A on the corner of Trumbull and Bagley, on the Bagley side. Call 313-338-5122 or email [email protected] for more information or to schedule an appointment. Find the shop online thebeardedladydetroit.com. or follow them on Facebook facebook.com/thebeardedladydetroit and Twitter @beardedladydet.