With just hours to go before the polls closed, gubernatorial candidate Gretchen Whitmer and several other Democratic candidates made a last-minute pit stop in Detroit to express gratitude for the hard work of their campaign volunteers.
“We didn’t get this far alone — we’ve built this together,” Whitmer told the crowd of campaign volunteers Tuesday afternoon. “From the people doing to the hard work every day on the doors and on the phones, to the organized labor that joined forces, to my partner, the mayor, the county executive and the prosecutor … I’m really grateful for the work that we have done together.”
Others in attendance at the Detroit Volunteer Appreciation event included Whitmer’s running mate Garlin Gilchrist II, U.S. Sen. Debbie Stabenow, attorney general candidate Dana Nessel, Detroit Mayor Mike Duggan, Wayne County Executive Warren Evans and Wayne County Prosecutor Kym Worthy.
“I’m so excited that we are finishing this bus tour here,” Gilchrist said. “When I joined this ticket on Aug. 25, the first canvas kickoff was out of this office. And we have reached more voters than we’ve ever reached before with this campaign because we’ve been working together.” 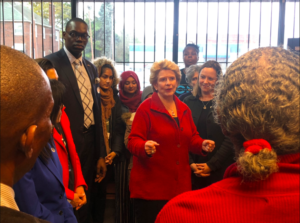 Candidates also seized the opportunity to make their final pitches to voters watching over a live stream. Mayor Mike Duggan praised Attorney General candidate Dana Nessel for her work on the marriage equality front.
“Four or five years ago, for people in Michigan to be able to marry who they love seemed like a long way off,” Duggan said. “And we had a lawyer who took the case against all the odds, not because it was easy, not because she was going to make a lot of money off of it. She did it because it was right.”
If elected to attorney general, Nessel said she would work to bring government back to a place where it’s working for the people, not against them.
“A large part of all of this, honestly, was just wanting to have a safe government that cared about people who live in this state again, and who cared about the people who live in Detroit,” Nessel said. “How long has it been since we’ve really had someone in government office that we felt really just cared, had empathy and compassion for the people who live here? That’s what I think we’re going to bring back.”
Whitmer reminded voters of issues like collective bargaining, affordable healthcare, clean drinking water and women’s rights that she’s been promoting over the past 700 days of the campaign. “Anyone who cares about these issues — and that’s every one of us, has a stake in this election.”
She continued: “You’re doing great work, let’s keep our foot on the gas. And tomorrow morning, let’s wake up as tired as we were in 2016, but victorious.”