Jennifer Tilly Is Your Friend to the End: The Longtime LGBTQ+ Ally Talks the ‘Chucky’ Series and Its Killer Queer Affirmations

Chucky is no Harvey Milk, but the killer doll with fire-red hair from openly gay creator Don Mancini is, at least, a good queer-affirming dad.

Dad, you ask? Let’s back up: So, yes, Chucky, Mancini’s terrifying brainchild, is the doll that made his debut in 1988’s “Child’s Play,” killing lots of people in really terrible, gruesome ways. He fell in love with another doll, named Tiffany Valentine (played by “Bound” actress Jennifer Tilly, who also plays herself in the franchise), and the two of them — stay with me — had a child, named Glen/Glenda, who is genderfluid and queer.

For years, Mancini has left his queer mark on the series, especially in “Seed of Chucky,” but Syfy’s “Chucky” is special in that it doesn’t treat queerness as a spectacle — there’s a sweet gay teen love story at the center, while Chucky, as chillingly wise-cracky as ever, still does his psychopathic killing thing. Chucky even tells the series’ protagonist, Jake, a high schooler struggling with his sexuality and his father’s homophobic behavior, that he’s on his side (to a point, that is; you know how manipulative Chucky can be). After all, Chucky himself has a queer kid. Representation is representation, even if it’s in plastic product form.

Tilly has a meaty multiple-episode role in “Chucky,” and she makes one helluva entrance — in bed, with Fiona Dourif (the daughter of Brad Dourif, the voice of Chucky), who plays Nica and is possessed by Chucky. Here, Tilly talks about the series’ casual queerness, her gay icon roots and the major difference between her sex scene with Fiona and her iconic one in “Bound” with Gina Gershon.

Does Don ever have to do any convincing to get you to play yourself and Tiffany again? Or is this the easiest yes of your career?

He had to do a lot of convincing to get me to do the first Chucky movie; I just did not want to do it. And you know, I never watched horror movies. So, I didn’t understand the good in horror movies. He said when he was writing Tiffany he heard my voice in his head. [Laughs.] And I know the studio wanted him to cast a “Baywatch” actress that, you know, would [be maybe] less expensive. But he was like, “I just couldn’t get Jennifer out of [my] mind.” And so, they kept coming back to me. Once I read the script I was like, “Tiffany is really kinda funny and delightful.” And the idea that I was going into the doll’s body, once I played Tiffany I was really hooked.

But I never thought there were going to be more episodes. Now I’m talking in television talk. I never thought there were gonna be more movies because Tiffany dies not once, but twice. So I thought, “Oh, that was really fun. It was one and done.” And then a couple years later Don called up and he said, “We’re gonna make another Chucky movie, are you ready?” And I was like, “But Tiffany’s dead.” He’s like, “Oh, Jennifer, no. You’re not familiar with the voodoo killer doll universe. Tiffany never dies.”

There are so many layers of queerness in “Chucky.” What excites you the most when you consider the franchise’s — and now the series’ — queer sensibility?

The one most likable character in “Bride of Chucky” [from 1998] was the best friend who was gay. And so that was a very positive role model. The trans community loved Glen/Glenda. It was sort of ahead of its time, and voiced by Billy Boyd in a very touching way. I’ve always had a big gay following for Tiffany. [Laughs.] So many drag queens have played Tiffany and put Tiffany in their act. And I was actually kind of a gay icon, to use the word loosely. I had a big gay following, let’s put it that way, and now [I] sound really conceited.

It started with [the 1994 dark comedy] “Bullets Over Broadway.” I was like, “Oh my gosh, I have a gay following.” [Laughs.] I was so proud. I remember once I went to a club and I saw Sandra Bernhard in the club, and everyone in the club except for me and Sandra Bernhard were gay men. They’re laughing at everything she said, and I was like, “I want to be her. I want to be up on stage and be a gay icon.” Chucky really sort of accelerated that, that trajectory toward achieving my dreams.

The gay community loves Tiffany because she’s so over the top and campy and has that sort of wicked sense of humor, which is Don’s sense of humor. And then “Seed of Chucky” [in 2004] — you really can’t get gayer than that. Besides the genderfluid kid we had, John Waters is the pervy paparazzi. Just so much camp. I love that movie, but I think it was the least beloved of all the Chucky films.

Now with this one, what I love about it is that Jake, played by the lovable Zackary Arthur, and Björgvin [Arnarson], whose character’s name is Devon — it’s a coming-of-age story, and it’s just so matter of fact that the young kid [and] his first love both happen to be male. I think it’s really important. It’s casual. A revolution not coming with a roar, but just kind of creeping in. It’s the world as it is: here’s two people, and they’re going through puberty, and they’re both male. And it’s had a tremendous response. I haven’t heard any backlash. The kids are really cool now. Everybody just loves the characters. They’re just rooting for Jake and Devon to get together. 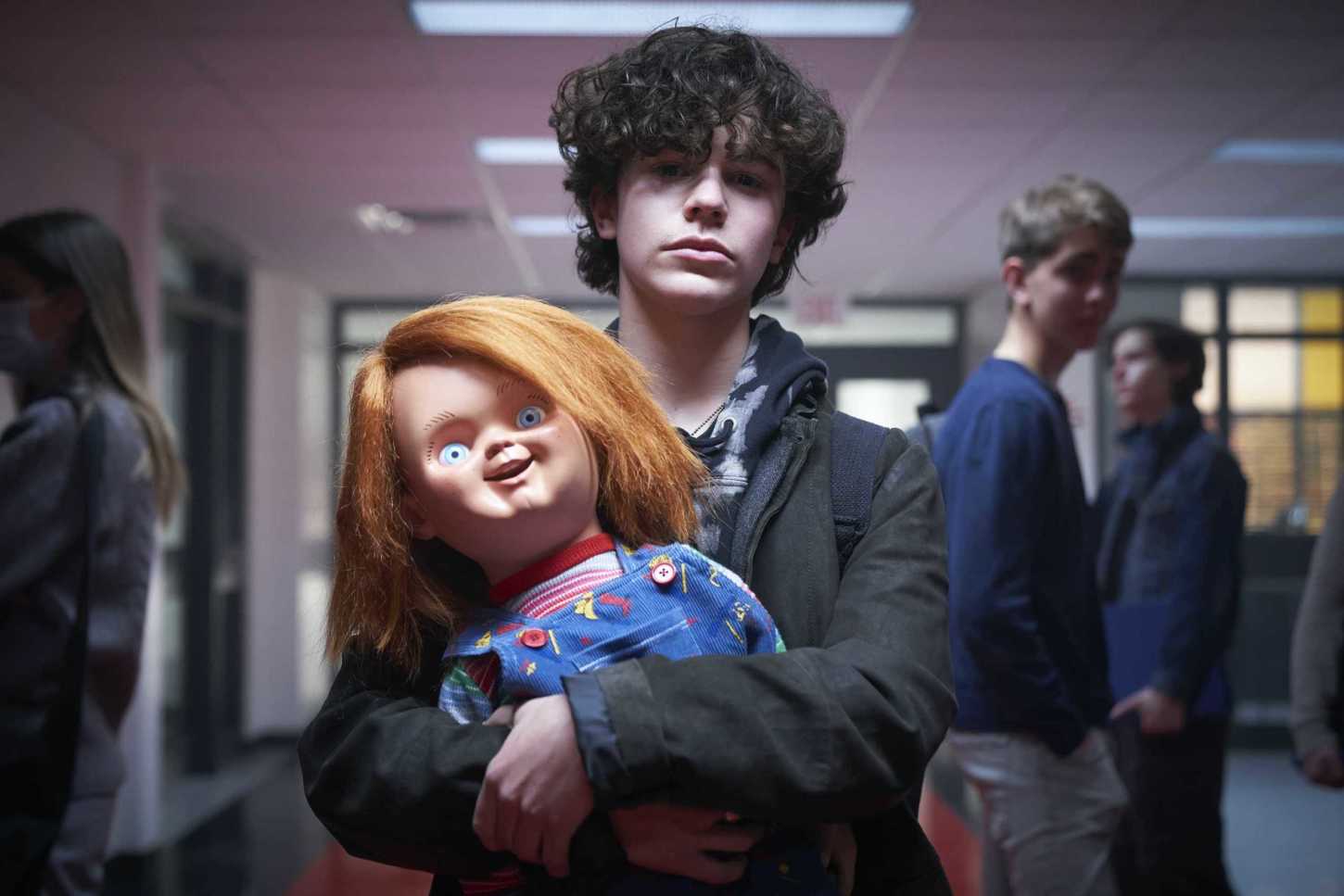 How much have you thought about what Chucky represents in the series? To me, he’s like Jake’s id. He represents the rage of someone who’s forced to repress who they are.

That’s so interesting. One of the reasons why I think that people really relate to Chucky is because everybody does have that sort of inner rage. And it’s weird, the thing I’ve noticed over the years is people relate to Chucky. They don’t relate to the attractive people being chased and killed. [Laughs.] When they’re watching the movie, they’re not the person running and screaming, looking over their shoulder. They’re Chucky. [Laughs.] And Chucky is so gleeful and non-remorseful. Like, when Tiffany kills people she feels really bad afterwards. But Chucky just has a good time with no after-killing hangover.

So people love Chucky. There was that scene [in “Chucky”] where Chucky says, “You know, I have a genderfluid kid.” And Jake goes, “And you’re OK with that?” He goes, “I’m not a monster, Jake.” I have to tell you, gay Twitter went crazy. They’re like, “Chucky is an LGBTQ+ ally!” I mean, they loved it so much. Now I have these kids following me on Twitter and their handle is @glendafluid [laughs] ‘cause they loved the way he said genderfluid: _gendafluid_.

I can’t help but think about how you wanted to play Corky in “Bound” and here you are as Tiffany, not playing the butch character yet again. Fiona gets to play the butcher character instead.

I know, and Fiona does such an amazing job. You know, the Wachowskis [Lana and Lilly Wachowski, both trans filmmakers, directed “Bound”] were humoring me, because I went in and read for Corky first because another actress was already set to do Violet. They said, “We never had her in mind for Corky; we always had her in mind for Violet.” Because I thought I was this close to getting Corky. They were just stringing me along.

When I look back on that, I can’t imagine anybody but Gina [Gershon] playing Corky. She’s so fantastic. And I can’t imagine playing anybody besides Violet. They were so cranky with me. They go, “Violet is the better part.” Which is true. I mean, she has much more [of] a character arc, like discovering who she really is.

Now, after my long career, I’m just happy that people still consider me sexy and that I get to play the sexy parts. And you know, making out with Fiona was an absolute delight, I have to say. She does all the heavy lifting in the scene because she has to cry and scream and fall on the ground. I’m so camp in this, like I’m always thinking of jokes that I can put in. I just like to make people laugh. But in the last couple episodes there’s lots of emoting from Miss Tilly. You’ll see that Oscar-caliber acting come to the forefront. [Laughs.]

When we last chatted, you told me that on the set of “Bound,” you and Gina were looking out for each other during that sex scene.

Right. Well, because Gina was like, “Can you hold up my breast like so they look a little more plump?” [Laughs.]

With Fiona it was great, but it wasn’t as gentle because we decided that Tiffany and Chucky have sort of a volatile relationship and that violence is a little bit of their foreplay. In fact, in “Cult of Chucky” [from 2017] we did a thing — Don cut it out, but we thought it was brilliant [laughs] — where she kisses me, and then I slap her, and then she slaps me back. We’re like, “That sums up the relationship.” Don’s like, “Why are you guys doing that? Stop. Just stop.” [Laughs.] We had another director on [“Chucky”]; they had different directors for the episodes. So it was a woman director, Leslie, an amazing lady. And I came up with the idea. I said, “How about I start on the bottom,” because we felt like there’s a battle, like who’s the top and who’s the bottom in the relationship? “So, you’re on top of me and then I roll you over and I get on top of you. And then you don’t like being on the bottom. [Laughs.] And so you roll me over and get on top of me again because you’re still Chucky even though you’re in a woman’s body, so you get the upper hand.”

So, I thought it was kind of a metaphor for them in the relationship, like, like who’s in charge? We did play it a little bit more violent; the love scene between Corky and Violet was very fluid and very sensual. But the love scene between Fiona, [as] Nica, and Tiffany? She is Chucky, after all, so it was a little bit more aggressive. A little rough and tumble, shall we say.

Since Don has turned Chucky into an LGBTQ+ ally, can we expect to see Chucky in some Pride parades next year?