Lev Raphael has done it again. Known as a literary voice who often weaves his Jewish heritage and his LGBTQ+ identity into bestsellers, Raphael has written 27 books to date, ranging in genre from literary fiction, to mystery, fantasy, memoir and non-fiction. His latest, “Department of Death,” is the 10th title in the Nick Hoffman mystery series. An English professor and amateur sleuth, Raphael first introduced the Hoffman character in 1996.

“I’ve been in love with crime fiction since I discovered Agatha Christie in junior high school,” Raphael shared with Between The Lines during a recent sit-down. “I relish the idea of mayhem taking place in a closed group of some kind, with secrets and people’s true personalities being revealed during the investigation. And then there’s what Oscar Wilde famously said: ‘The good end happily and the bad unhappily. That is what fiction means.’ I especially have fun with Nick’s voice, with how he sees the world, so visiting with him is like a vacation for me.”

So, 10 books in, how does Raphael keep the series fresh? And what is the trick to writing a good mystery novel?

“First of all, you need a sleuth who doesn’t feel like a cliché, you know: divorced, alcoholic, has a troubled teenage daughter. Then you need to invite your readers into a world with its own rules, regulations, culture and history that will make readers feel they’re on a voyage to a familiar but alien land,” he says. “Your plot has to be honest — readers need to be offered a chance to figure out who the killer was — and you need a good victim. That is, you need someone people can imagine as the object of enough hatred, from whatever source, to be killed. I also would suggest reading as many different kinds of mysteries as possible to fuel your creative fire for anyone planning to write a mystery.  You need to be steeped in the conventions of the genre.”

A former college professor himself, Raphael writes what he knows about best in “Department of Death.” 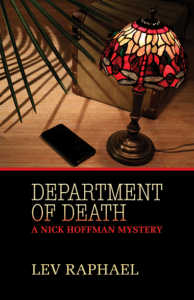 “Academia is a natural subject for satire because people there take themselves so damned seriously,” he said. “Bald men arguing over a comb as Borges put it. And in the Nick Hoffman books, I have a narrator who’s an outsider: he’s gay in a totally straight department. As an outsider, he can see ridiculous, and even egregious, behavior more clearly than his colleagues and call it out as it deserves to be.”

Raphael has long been lauded as something of a giant in LGBTQ+ and Jewish literature. When asked if he feels any pressure to be particularly profound, he says that’s largely lessened over the years.

“I think I might have felt the kind of pressure you’re asking about if I’d stayed in New York, immersed in what Joni Mitchell called ‘the star maker machinery’ in one of her songs. But I’ve lived in Michigan more than half my life and moving here freed me to write at my own pace and let go of NYC-size expectations for what I should and shouldn’t do or be.

“From the start, I’ve wanted to build bridges in my work between gay and straight, Jews and non-Jews, and I think that’s happened,” Raphael went on. “I see my body of work as playing a part in what Judaism calls ‘tikkun olam,’ healing the world. That’s one reason I’m glad to have done hundreds of talks and readings on three different continents and to have met so many different people.”

To learn more about Lev Raphael, visit levraphael.com or writewithoutborders.com.