Native Detroiter looking to make a difference in his hometown

As a kid, Kevin Heard, Detroit native and founder of the Detroit Regional LGBT Chamber of Commerce, never felt like he belonged.

He grew up “in a lower to middle-class home” and went to the public schools Ann Arbor Trail and Cass Tech, which were outside his neighborhood. Heard’s siblings, who are eight and six years his senior, couldn’t relate to his experiences. And his parents were always working. Because Heard spent a lot of time by himself, he knew he was gay at an earlier age. However, with his peers calling him “white gay boy,” “the F word,” or “gay bob,”  he stayed closeted. All he knew was he “had to get good grades because that is the only way [he would] be able to leave Detroit.”

Heard put all his energy into excelling at school. Then, in his senior year at Cass Tech, still quiet about his sexuality, he found “a space to be creative” in dance. That was his outlet until he received an offer from Clark Atlanta University, a historically Black college. It was in Atlanta that he started to embrace who he really was.

“Going to college, I had to learn how to be myself, and Atlanta does that to young gay men pretty easily,” he tells Pride Source. “Seeing so many Black gay men and women in one city out in the open — masculine, feminine, and in between — I felt comfortable enough to be myself, and that is when I started getting actual friends.”

He said Clark was an “amazing” and “eye-opening” experience that allowed him to be exposed to other people outside Detroit. Though he loves his city, Heard said he needed a change.

“[Going to Clark] really reinforced that my culture is not a monolith,” he says. “We come from different areas of the globe and different school systems.”

“[B]eing in Atlanta,” he continues, “I saw many Black queer men taken away from us with the hard lessons of the lifestyle. One can fall in love with fantasy and some of the influences that come with that — quick money scams, sex, drugs, HIV, gay dating sites, and the club scene. Many people were disowned and did these things to survive. I imagined they felt alone like I did growing up, but with adult problems. It was heartbreaking to see.”

In 2010, after receiving his bachelor’s degree in mass media arts with a concentration in public relations, Heard stayed in Atlanta, hoping to pursue a career in communication. But Atlanta’s “horrible economy” made those plans challenging to fulfill. “I moved back to Detroit in 2012 after two years of working in retail and PR,” says Heard. “I wanted to kind of start over and reassess where I wanted to go in my career. And my family is here, too.”

Soon enough, Heard had secured a position with Gannett/USA Today in customer service. He went on to earn an MBA from Walsh College in Troy and soon began moving up in the company. Today, he is the diversity and engagement program manager, where he oversees Gannett’s Inclusion, Diversity and Engagement initiatives, working closely with employee resource groups and social campaigns.

Heard might have never gotten the position with Gannett/USA Today had it not been for another passion of his, one that ignited in 2013 when he founded the Detroit Regional LGBT Chamber of Commerce.

“I went through five interviews, and what really separated me from everyone else who was being interviewed was my work with the Chamber and the fact that I had built something from the ground up, and it’s still growing and thriving,” he says. “They were impressed that I created something out of pure passion.” 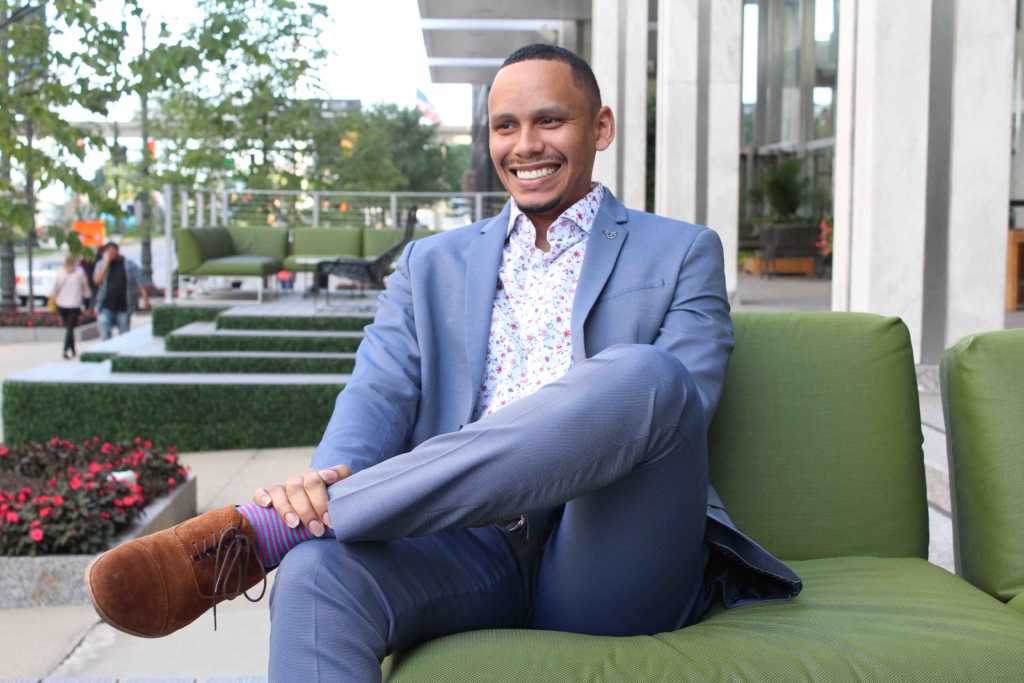 Detroit Regional LGBT Chamber of Commerce came out of a project spearheaded by former Detroit City Council President Charles Pugh that aimed to create an LGBTQ+ business district in the city.

“We had a great idea about creating an LGBTQ+ business district,” says Heard. “They said we needed to create a Chamber of Commerce. And I said, ‘OK, what’s a Chamber of Commerce?’ Then I nerded out in a corner and researched everything about what a Chamber does. I came back into the next meeting and gave them all my information and said, ‘This is what we can do.’”

Soon after, the Chamber applied for the Hope Fund grant, which launched their ability to file for nonprofit status. The status allowed them to expand their mission to help the LGBTQ+ community, upgrade their systems and brand. Heard was a significant part of that expansion.

“After moving over to president in 2015, I noticed we had to streamline some systems and rebrand ourselves,” says Heard. “I navigated us through that process by integrating a CRM system on our website, finding non-profit resources to assist with email marketing and communications, [and] hiring a Black queer website designer to recreate and host our website and refocus our mission to sow into our community.”

Since its inception, the Chamber’s mission has evolved to focus on LGBTQ+ business and development while also offering resources to the community. As local members of the National LGBT Chamber, the Chamber can offer LGBT certification to all members who join the Chamber as local businesses. In addition, certified businesses are included on a national registry, allowing small businesses to connect with larger corporations.

After all the Chamber’s work throughout the years, Heard now considers the Chamber his “baby.” And, with a new, diverse board in place, he said he’s excited about its future.

“I’ve noticed that a lot of our LGBTQ+ organizations across the country don’t have that diversity, and because my day job is in diversity, I have to walk that walk if I’m going to talk that talk,” he says. “I have to begin with the organization that I’m a part of. So building a diverse board will only help us in the long run.”

Heard’s inspiration to have a diverse board went beyond his day job. His decision was also based on his own (literal) reflection.

“I’m a Black gay man, and I didn’t see any other Black people on our board, so we needed more people of color, and I wanted to make sure we’re gender-focused and gender-balanced,” he continues. “We are looking for trans people to join our board as well.”

Heard said his battle with imposter syndrome is constantly reminding him he is often in spaces where he is the “only person of color, as well as the only gay person.”

“I am consistently learning, and I consistently doubt myself, but I push through,” he admits. “That’s why I am so excited about the new members on this board. Diverse, successful and dynamic.”

The success of the Chamber led by Heard is evident, says board member Mike Flores.

Heard said he has some significant plans for the Chamber. As a person who’s “motivated by those who don’t have a fair shake at life,” he wants to use his platform to bring underrepresented voices to light and break down “negative stigmas in the world about the LGBTQ+ community.” As a result, Heard said the Chamber is looking to expand its programs.

“We’ll be doing a partnership with Google,” he says. “We’ll be putting on 10 workshops that are focused on small businesses and job seekers. We’ll help them develop their business skills and design better websites. These will be free for members and a nominal fee for non-members. And our professional membership is only $100 a year.”

Looking to the next five years, Heard said he predicts the Chamber will continue to grow. He also indicated that the Chamber and its members would have opportunities to diversify its initiatives through local and global impacts.

While Heard is excited about the Chamber’s future, he also plans to step down as board president to an advisor eventually. As an advisor, he believes the Chamber will be able to grow and thrive beyond him and that it’ll be like “seeing a child off to college.”

“I don’t want to be the face of anything when the Chamber’s work should be front and center,” he says. “The impact of the organization should be bigger and not just the person or group who started it.”

He also has goals for his personal life as well. He said he wants to become more active in his family business and grow at USA Today. “My father runs several properties in the city. I see myself growing at USA Today, probably either in operations or human resources,” he says.

Though Heard’s plans are varied, he said one thing remains the same: He wants to make sure “Detroit is winning.”

“That’s the bottom line,” he says. “If in five years, the city is winning, then I’ll be winning.”

About the Author: Jason A. Michael and Jackie Jones