FERNDALE — What do you get when you combine The Ringwald — a theater with a mission to give voice to LGBTQ+ and other marginalized people — Theatre NOVA — a theater dedicated to showcasing new plays and new voices — and the COVID-19 shutdown?

You get “A New Brain,” a musical by William Finn and James Lapine, and you get to watch it via Broadway on Demand this month.

“A New Brain” is described by The Ringwald and Theatre NOVA as “a life-affirming, heartfelt, often comical musical about a composer during a medical emergency. As doctors and nurses fly in and out of his room, trying to figure out what’s wrong with his brain, Gordon [the composer] drifts in and out of consciousness as he contemplates his life, legacy, and the meaning of music — all while navigating his relationships with his best friend, mother, and boyfriend.”

Vince Kelley, a Michigan native who just moved back to the state from Minneapolis, directed the production.

Kelley tells Pride Source that “A New Brain” will “definitely appeal to musical theater fans and fans of William Finn and Stephen Sondheim” as well as “some very high musical theater camp.”

Oh, and “anybody who has a complicated relationship with their mother.”

Kelley has a long history with The Ringwald that began back when he auditioned for “RENT.” He’s filled a variety of roles at the theater, including costume director and board member at large. All of this led up to other folks telling him, “You should totally direct. You’re so good at telling everybody what to do.”

The COVID-19 shut down has been hard on everybody, but performance spaces and performers have been hit especially hard. The desire to perform and for live theater persisted, however, which led to a rethinking of how theater is experienced with productions being presented via streaming services.

“Diane [Hill, Producing Artistic Director of Theatre NOVA] and I cooked up this little quarantine dream,” Kelley says of deciding to find a way to create in the face of the pandemic.

Because a theater can’t just decide to film their productions and make them available for viewing without permission, they got a COVID-19 Contingency License from Concord Theatricals that allowed them to do just that.

Kelley had never tackled a project like this before and he might not have believed it possible had he not worked with cinematographer Jake Turner on another show.

“He brought all these cables and all these lights and he’s doing all these crazy, weird shots and I’m sitting there like, ‘Jake what is this going to look like? You’re on the floor, what kind of shot is this?’” Kelley says. 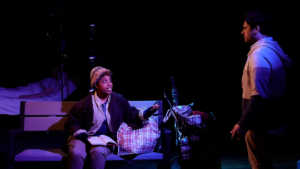 But when Kelley saw the finished product “it looked great.”

“We can do anything now!” he remembers thinking. “We can do it all now that I have my cinematographer!”

He told Turner, “Between the two of us we can make ‘A New Brain’ the coolest thing presented virtually, so everyone can feel like they’re at the theater in a fun, cool way.”

Kelley makes sure to point out that “A New Brain” was pro-shot. So don’t think you’ll be watching something like a high school play with a single stationary camera positioned at the back of the theater. There are angles and cuts like you would see in a movie.

“We were still operating under very strict theatrical principles, like stage lighting,” Kelley says. “But some of the more intimate moments we were able to get up close.”

During the process of filming the musical, the cast and crew abided by COVID-19 safety guidelines to keep everyone safe.

Kelley remarks that seeing a production in a theater is “second to none” and that “we are craving that time back to gather when we can be surrounded by everybody and get that reaction from an audience.”

But he also acknowledges that the ability to do streaming content has expanded The Ringwald’s reach.

“We have newfound fans all across the country,” he says. “We don’t want to leave behind this audience. So we’re going to think of new fun ways that we can make streaming or virtual content in the future.”

“We’re so anxious and excited to get back before an audience and do what we love to do again,” Kelley says. Streaming “A New Brain” is a stone on that path.