A self-described “data nerd” with an interest in public policy, Chase Cantrell first learned of the Citizens Research Council of Michigan (CRC) around 10 years ago. It’s a nonprofit, nonpartisan think tank whose goal is to secure good government for all Michiganders. Their work is known to provide a baseline for many news outlets and policymakers to get their information.

“I didn’t know that that kind of institution existed in the state of Michigan,” said Cantrell, who was recently elected as the organization’s first openly LGBTQ+ board chair. “And for me, it’s vital, even more so 10 years later, that we have actual verified research and information that we base our decisions on.”

Cantrell, who had never held a board position, was eager to join. The mentor who introduced him to CRC told him, “We’ll figure that out one day.” Years later, when the call came, Cantrell was elated. One thing that impressed Cantrell was the organization’s independence.

“Entering the board was an interesting experience because at the time I may have been the only African American on the board,” Cantrell explained. “I rolled up my sleeves. Now, there’s much more diversity, and we’re continuing that mission to grow it even more.” 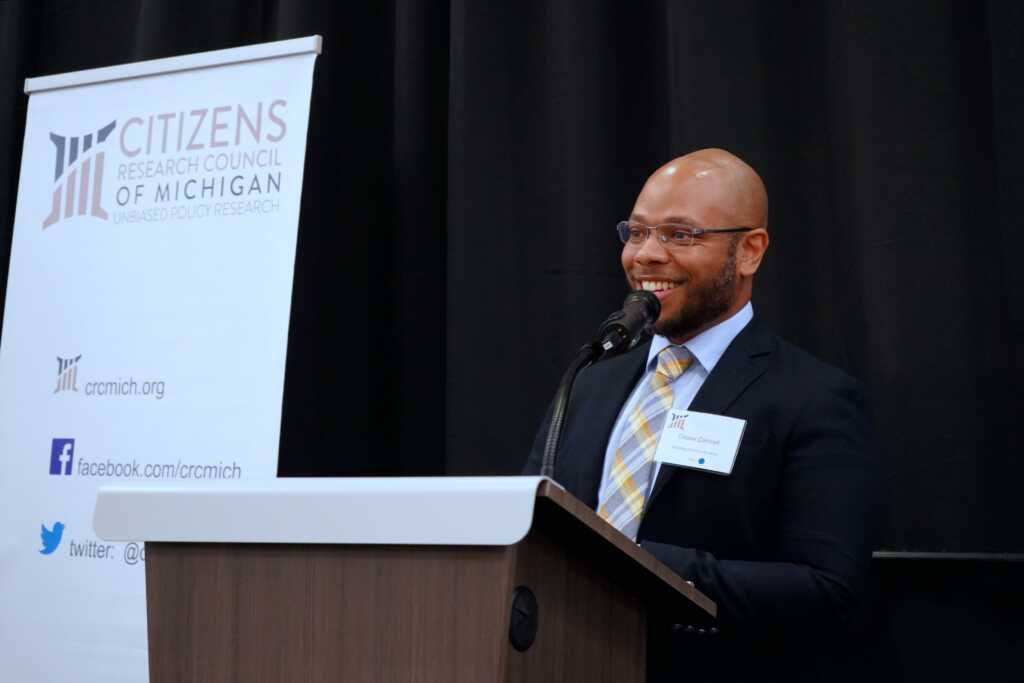 As the organization’s first openly LGBTQ+ chair, he doesn’t take that distinction lightly.

“I’ve always lived very openly, whether it was when I was 25 at the law firm or even now,” Cantrell said. Diversity is a key consideration as he plans to build out the board, too. In addition to race and gender, they are now considering LGBTQ+ status as well as disability status.

Cantrell believes that kind of broad diversity will be reflected in the work CRC produces.

“The kinds of research agendas that we set in some ways are based on the kinds of suggestions that come from board members and the public,” Cantrell said. “We need a diverse set of people at that board table to then inform the trajectory and path of the organization itself. For me, it’s important to be able to not only be open in that way, but then invite others to feel comfortable enough to be open as well.”

Board member age is another diversity consideration. “The only way an institution can survive is if you’re continuously replenishing the talent,” said Cantrell, who, at 39, is the youngest board chair in the organization’s 106-year history. “And you need a pipeline of young people who will become the leadership as time goes on.”

While Cantrell’s path from corporate attorney to real estate developer and executive director of a nonprofit and chair of another may not have been preplanned, it followed a logical progression. His journey even took him to Europe for a year to teach English to underserved students in the suburbs of Paris. But Detroit kept calling him home.

It was 2013 and Cantrell was transitioning out of his legal career as a corporate and real estate attorney with Dykema Gossett PLLC.

“Most of the suburbs are underprivileged areas,” Cantrell said of Paris. “A lot of Black and Brown students. So it felt very familiar. It almost felt like teaching in [Detroit Public Schools]. But I have to say that even though that was an enriching experience, I really missed Detroit. And it wasn’t missing just my family and friends — it was missing the place. And I’ve had to unpack that for myself over the years.”

Until that time, Cantrell had been a transactional attorney who facilitated corporate and real estate acquisitions, sales and other complex transactions. He began his career in 2008, just when the recession hit. “Banks weren’t lending and developers weren’t developing,” Cantrell recalled.

However, he noticed when real estate started coming back to the city, “most of the developers who were clients didn’t look like me. I’m African American, representing much of what the population looks like in the city of Detroit,” Cantrell said.

Noting the disparities in an inequitable system, Cantrell founded Building Community Value (BCV) in 2016, which he originally planned as a nonprofit real estate developer. “Essentially, it’s a three-month intensive program where you have to be a resident of Detroit, Hamtramck or Highland Park,” Cantrell said. “We take residents through a process of learning what development is.” He emphasized it’s not a class for budding contractors. “This isn’t how to put in drywall or how to put a window in. This is, ‘How do you approach a project as a developer? How do you do the economic analysis? How do you find a bank or a community development financial institution that will fund you? How do you actually make a project happen?’”

More than 350 residents of Hamtramck, Highland Park and Detroit have attended the class. One of those individuals is Kevin Heard, an acquaintance of Cantrell and founder and president of the Detroit Regional LGBT Chamber of Commerce. “I’ve been very impressed that he’s such a Detroiter that he really wants Detroit to win, too,” Heard said.

“He’s definitely someone who is thoughtful in how he approaches situations,” Heard added. “He likes to bring people in, to really take things apart and look at it and find the specific issue and be able to pinpoint ‘This is the thing that we need to fix in order for us to really be equitable in the end result of what we’re doing.’ And I think that really helps him be able to navigate and maneuver through spaces in the city of Detroit, understanding the historical context of where we live, how we operate in the city, and how the city should operate. I think that’s a beautiful thing about what he does as a leader in this community.”

Cantrell said it’s sometimes frustrating that popular images of what it means to be gay are not aligned with being Black — but that’s shifting, he noted.

“Being in a majority Black and Brown city, the gay people who are here are in fact Black and Brown,” Cantrell said. “So it’s always been a struggle of what people’s perceptions of gayness are. But it’s also been an opportunity for me, I think, to also highlight the fact that there’s diversity within the LGBTQ community. So in fact, that intersectionality is a point of pride. Like, yes, I can be both Black and gay. I can be proud of both. And I can represent a community that doesn’t often get highlighted as even existing.”

Proud of his identity as a gay, Black man living in the city of Detroit, Cantrell is staying put. As a developer, he’s currently working on about 21,000 square feet of commercial space on the west side of the city, where he lives. His parents, brother and sister all live on the west side, too.

Cantrell said his goal is to practice what he preaches. He enjoys teaching, but also wants to stay active in doing the work.

“I keep leaving and coming back, but every time there’s this pull of, ‘I really want to be here,’” he said.

“One, there’s a community here that feels enriching. I enjoy the fact that this is the majority Black city. But also, there’s so many challenges in this region. And I use the word region on purpose; it’s not just a city. There’s so many challenges of Southeast Michigan functioning as a region that I feel like my skill set really can have impact here in ways that I wouldn’t be able to have impact in other places. So, as I think about my career and about the things that I want to accomplish in my lifetime, this feels like the right place to do it.”