Vince Kelley Left Michigan. When He Came Back, He Found a Family Who Changed Everything.

When the Ringwald Theatre’s “Who’s Holiday” star Vince Kelley took his first steps into the big wide world after high school nearly 20 years ago, he couldn’t have predicted who he’d be by the end of 2022: An out gay man in a longterm relationship, an accomplished actor who took on New York before coming home to Detroit, and a successful, in-demand costume designer.

Looking back, though, there were some clues. Kelley holds a clear picture of one early, critical memory, in particular. He was 8 years old and decided, at the urging of his uncle’s high school girlfriend, to audition for “The Sound of Music.”

“She helped me and my mom, and we picked a little song for me to audition with — I think it was ‘If I Only Had a Brain’ from ‘The Wizard of Oz,’” he remembers. “Afterward, I remember I told my mom, ‘I just want to keep doing this.’ And then I did.”

Soon, Kelley was taking on roles in every high school drama production, and when that participation wasn’t enough, he joined community theater, too, a journey that would lead to a coveted spot in the American Musical and Dramatic Academy in New York City. His first professional role after college may not have been the dream gig — Kelley played young Ben Franklin for “some horrible children’s theater” — but it was pivotal.

Kelley returned home living a life much like the one he’d been living before his time in New York. He returned to the acting world, joining up with several local theater groups. Then, on the advice of Brandy Joe Plambeck, one of the Ringwald’s co-founders, he decided to try out for the first non-professional theatrical performance of “Rent,” which the Ringwald was preparing to cast. Kelley decided to go out for either Roger or Mark, straight characters in the play. They felt the most natural and comfortable to him, since, in real life, he was essentially playing a straight man as well.

But those casting the play thought Kelley would be a better fit for Angel, the gay, possibly transgender lead.  “I was like, ‘What, me? No, I could never… What are you talking about? Fine, I’ll do it. It’ll be like a fun challenge.’”

At that point, Kelley says, he’d never done drag or worn heels or makeup, as Angel does in the play. But the Ringwald staff, including Plambeck, the director, promised they’d help.

Later, Kelley says, Plambeck and other Ringwald actors and staff admitted they had an inkling right away that Kelley was actually gay. “They told me, ‘Yeah, we all knew. But that’s not our story to tell, and that’s not our journey. So, all we could do was give you your heels and your wig and help you and support whatever you needed to do.’”

A few shows later, Kelley met a “boy named Matt,” and the rest, as they say, is history. The pair have been together for 12 years. When he finally said the words out loud, Kelley says, it was during a birthday outing for Ringwald founder and artistic director Joe Bailey. “Someone asked me about Matt, like what was really going on, and I said, ‘You guys, I’m gay.’ And (Ringwald co-founder) Joe Bailey, he said it was the best birthday present he ever got.” 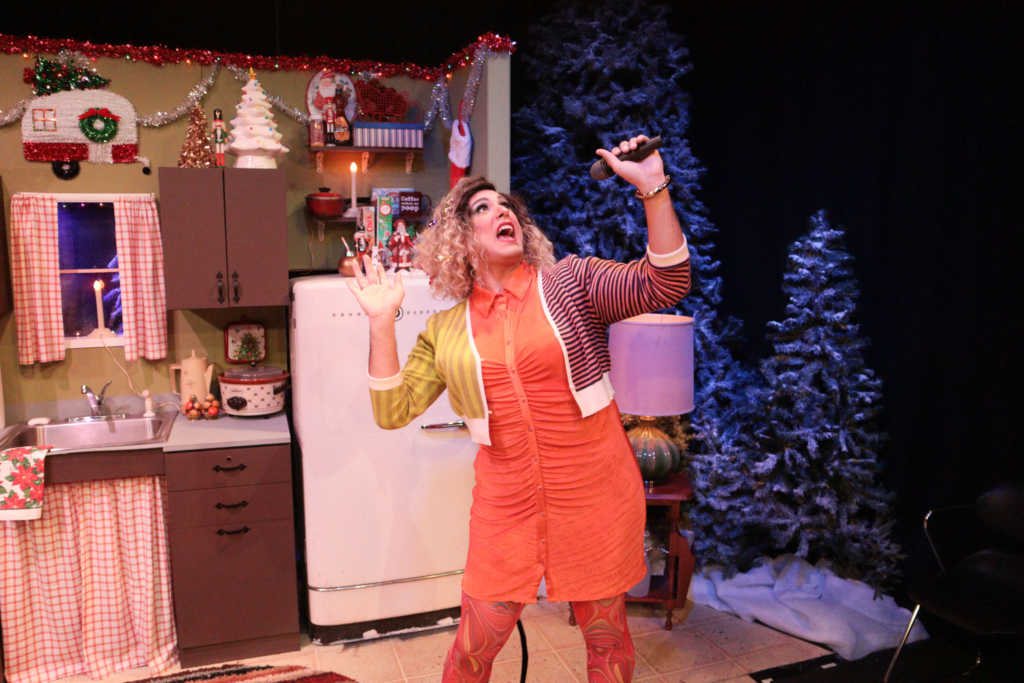 The Ringwald community, Kelley says, has been a true family to him over the years. “I don’t want to get too cheesy, but I didn’t have any role models as a kid,” he says. “I grew up on the east side, and I didn’t really have anybody. I was really afraid of what my family would say.” But being in the company of people like Bailey and Plambeck and other successful adults who had “great lives” gave him a lot of hope that he, too, could do exactly what he wanted to do to build the life he wanted to have.

“They were making theater, and they were having fun, and they have these full, rich lives,” he says. “I was like, ‘Oh shit, wait. I can do that. I can do that.’ Without the Ringwald or the Joes and the family they introduced me to, I don’t know how much longer I would have, sadly, not been living my fullest life. They gave me a glimpse as to what it could be.”

Since Kelley joined the Ringwald 13 years ago, he’s become a mainstay at the theater, which now shares space with Affirmations LGBTQ+ community center in Ferndale. An audience favorite who won a state-wide theater award in  2016 (EncoreMichigan.com’s Wilde Award for Best Supporting Actor for his role in “Heathers: The Musical”), Kelley has starred in a wide range of productions, from “Hedwig and the Angry Inch” to “The Boys in the Band” and boasts a long list of costume designer credits, as well.

These days, Kelley truly seems to be living his best life. When he’s not on stage, he spends time with family and friends and travels extensively with his partner to places like Palm Springs, New York and New Orleans. The two live in Ferndale and share a 10-year-old dog, a terrier mix named Mary J. Blige. As far as hobbies go, though, for Kelley, his day job is his hobby.

“It’s a job in a way, of course, but I love it so much — it’s cliche to say ‘Find a job you love and you’ll never work a day in your life,’ but I really, really do love every aspect of it,” he says, adding that while he’s often on stage, he’s also a busy costume designer by trade. In addition to handling costuming at the Ringwald, he works for Troy High School, Grosse Pointe High School and Mosaic Theater as a freelancer.

Kelley says he created his vision for his “Who’s Holiday” Cindy Lou Who costume the same way he usually does — from the shoes, up. While other productions have leaned in more to the Christmas aesthetic when it comes to Cindy Lou’s costuming, Kelley says his interpretation was that Cindy Lou had lost her youth, “due to some bad decisions on her part.” Now that she can finally express herself, she wants to channel “real ’90s fun, bright, fun fluorescent orange and pink fur, and print on print on print, because it’s still the ‘Who’ universe. It’s still that grinchy Dr. Seuss vibe, but I wanted to kind of do something a little different.”

Bailey has nothing but confidence in Kelley’s Cindy Lou Who portrayal. “He probably has the quickest mind of anyone I’ve ever worked with,” Bailey says. “This is his first one-person show and I’m absolutely thrilled to watch him do his thing — no one else could do justice to the role.”

The show itself will be a bit of a departure from recent holiday shows at the Ringwald, which saw tremendous success with last year’s “Golden Girls”-themed show. “It’s going to be different from ‘Golden Girls,’ but I really try to deliver some laughs, and there’s some fun opportunities for audience participation — I hope people are excited about that and also a little bit scared.”