For Ruth Ellis Center Development Associate Dwayne Cole Jr., it was just a normal day at work when two supervisors asked to speak with him one-on-one.
“They asked me these questions about volunteer work that I’ve been a part of and different programs in the community and I just answered,” Cole said. “I didn’t really think much of it and then from there I got an email that said, ‘Hey, you’ve made it past the first round for the Colin Higgins Foundation [Youth Courage Award].’ It’s a national award so I didn’t think I was going to win anyway, but I was flattered to be thought of and then nominated. Then [I realized], ‘Oh my God, this is what [they] were applying me for.’”
After receiving news that he made it past the first round, Cole participated in a phone interview and, after a suspenseful wait, got the news that he was one of four winners from across the country. Not only would he be awarded $10,000 but receive an all-expenses-paid trip to the 2019 Creating Change Conference sponsored by the National LGBTQ Task Force, lasting from Jan. 23 through 27.
“I’m just excited about the experience because I hear a lot about Creating Change. I hear that people can get a lot of information from the sessions there and a lot of my colleagues at the Ruth Ellis Center are working some of the suites,” he said. “I’m excited to see what they have put together and to experience Creating Change for the first time.”

A Long Journey
The Colin Higgins Foundation was founded in 1986 to commemorate the life of the screenwriter, director and producer of the same name. The Foundation supports LGBTQ organizations like the Gay, Lesbian and Straight Education Network, The Trevor Project and HIV/AIDS prevention programs and, since 2000, has been presenting LGBTQ people across the nation with the Youth Courage Award. Winners of the award are LGBTQ youths who have “endured overwhelming hardships, yet handled themselves with the utmost grace and dignity.” For Cole, that hardship was homelessness. And, by the time he moved in with his grandmother at 16, he had to deal with another issue: she wasn’t fully accepting of his sexuality.
“When I moved in with her I told her that, ‘Yeah, I’m gay.’ That’s when it all started,” he said. “We didn’t have the best relationship at the time and I kind of needed to get away from that.”
Soon after coming out to her, when Cole was around 17 years old, his friend suggested that he explore some of the services offered at the Ruth Ellis Center. REC is an organization whose goal it is to provide both short- and long-term residential safe spaces and support services for homeless, runaway and at-risk LGBTQ youths. It wasn’t long before things clicked for Cole at the Center.
“When I first started going to the Ruth Ellis Center, I was a part of the out in the system program. That was a program that was looking into policies for LGBTQ men using foster care at the time,” he said. “And then, from there, I became a member of their Youth Advisory Board and then after being a part of their Youth Advisory Board they asked that I become a Peer Staff. I was a Peer Staff for two years and then I received the position that I have now which is a full-time Development Associate.”
Today, Cole is 21 and his responsibilities include aiding with Center fundraising, sharing the organization’s goal, aiding with its graphic design needs and monitoring communications, among other duties. Beyond those earned career skills, Cole said that REC helped him become a better communicator, too.
“Over time I developed the skills to even be able to talk to [my grandmother] … and then understand where she was coming from. When we had that conversation, she told me it was only because she was worried about the lifestyle … but that was all stereotypical ideation pretty much,” Cole said. “So, it wasn’t ever really anything exclusive to me as a person, it was only what was portrayed in the media of how a gay person looks, which is sex work, which is drugs, which is all of these bad connotations of being LGBTQ. And I told her that that wasn’t me … and did not define me.”
Though his grandmother’s shift in perspective didn’t happen overnight, Cole said that her perception of him now is a very positive one.
“Now she understands, and she sees the growth that I have had since graduating high school,” he said. “When I was in high school, I was depressed, and it seemed like maybe that would have been the path that I went down, but I never let anything stop me from doing what I felt was right for everyone around me and for myself, too. So then, once she was able to see that, it was like our relationship got better and she sees that I’m improving on myself.” 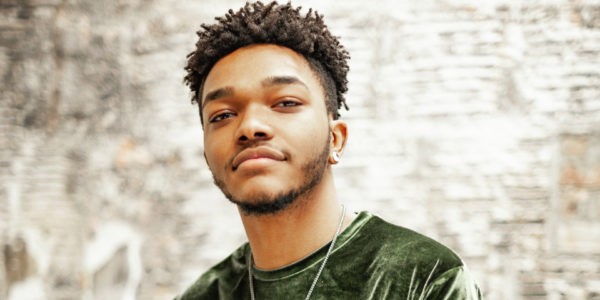 Uplifting Positivity
Cole’s outlook today is seemingly one of boundless positivity. When asked how he manages to keep his cheerful attitude despite the challenges he’s overcome, Cole said that it’s a mindset he’s had all his life that’s helped him surpass even his greatest obstacles.
“It was kind of hard, actually, having that mindset. Ever since I was younger, I was always this kind of vibrant, optimistic person. Like, I think of everything as the glass half full, sometimes to the point where people would get annoyed by it,” he said with a laugh. “But I felt like if you are in a bad time, just thinking about the negatives and not being hopeful and faithful, you’re only going to see negatives if that’s what you’re looking for. But, if you’re always looking for the positive, that’s all you’re going to find: positivity.”
Now that he’s combatted his own issues with coming out and homelessness, Cole’s focus is on aiding REC in its mission to help others in the Detroit area with similar problems. When asked what those who are unfamiliar with REC should expect before using its services, Cole was clear, “It’s like a family there.”
“Based off of my own personal experiences, just talking to people and experiencing the different programs has really helped me to find myself a little bit more. The staff there is really supportive,” he said. “I was able to have these long-lasting relationships with people, and then they say they’ll still be able to support me when I go to school for psychology — because that’s my passion — that they’ll still help me. … My background was pretty hard, and I have a supportive family at home, but I know I still have that supporting family at Ruth Ellis in addition to that.”