A Queer Detroit Homecoming: Motor City Pride Was Where ‘Everybody Was So Happy to Come Together Again’

Being at Motor City Pride for many over the weekend was like coming home.

After a 15-month wait due to COVID, Michigan’s LGBTQ+ community members came out in droves from throughout the state to attend the event at Hart Plaza. According to Dave Wait, chairperson of Motor City Pride, around 40,000 were there.

It was like a magical queer fantasyland, and even Wait couldn’t help but respond to the energy of Pride’s long-awaited in-person event in Detroit: “I’m tired,” he told Pride Source, “but my adrenaline from a fabulous weekend is keeping me going.”

Anthony DePaulis drove in from Woodhaven. “I remember feeling so happy that Pride was rescheduled and not canceled this year,” he said. “I will admit I was a little nervous since this was my first big event since the pandemic, but I’m definitely so glad that I [got to] experience it.”

Attendee Joei Redd echoed DePaulis’s sentiment, adding, “The energy and common love in Hart Plaza this year was so uplifting.”

Wait, too, says he’s both grateful for the support and happy that an in-person Pride could finally happen — even if it had to wait until September (the event customarily takes place in June). He noted the “picture-perfect” weather and said “things went like clockwork.”

“I was so pleased with how everything came together with the volunteers and everybody helping out,” he said. “Everybody was just so happy to be able to come together again.” 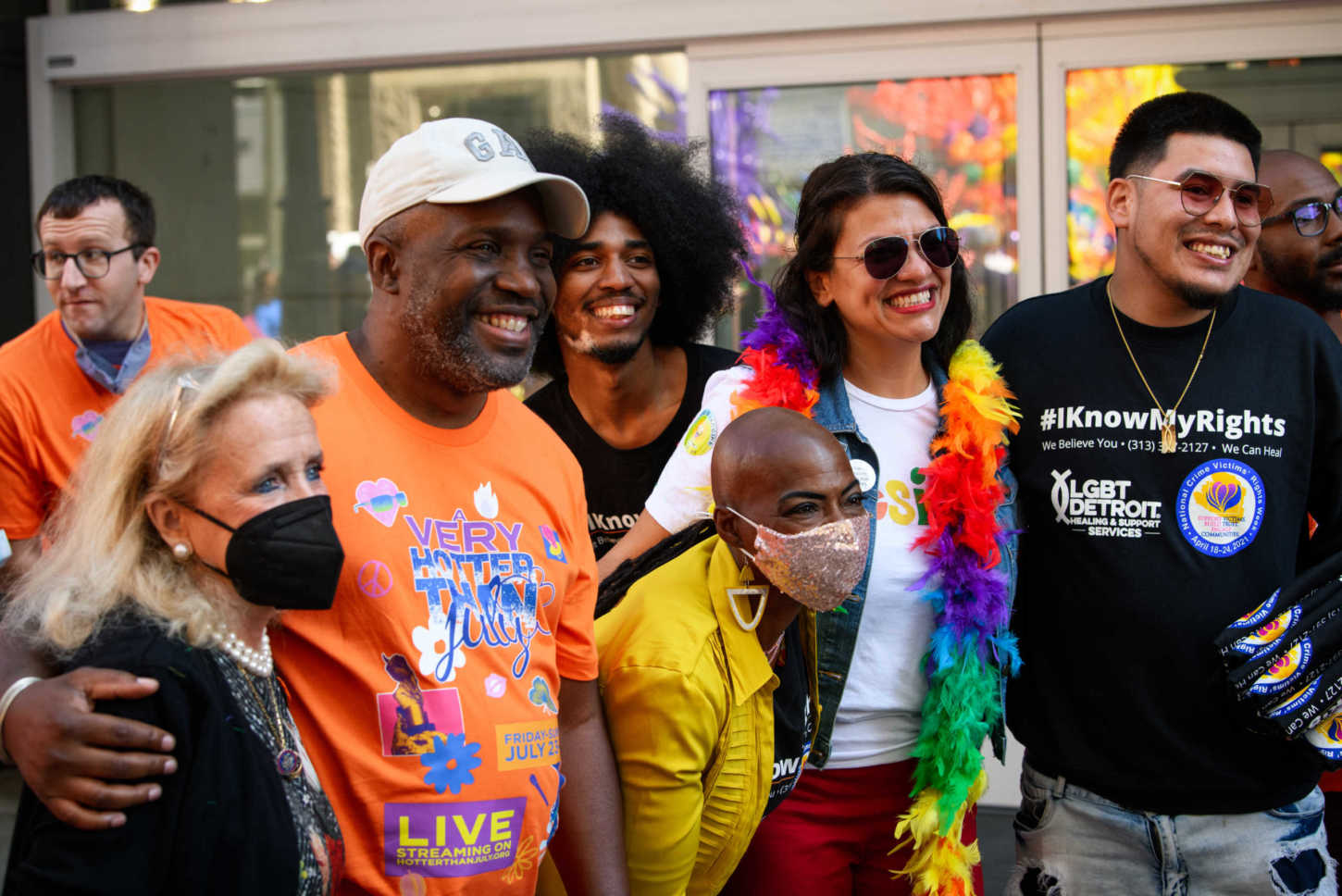 Though some people wore masks in accordance with the event’s guidelines, which requested that those who are unvaccinated wear a mask, that requirement didn’t stop people from forming a line that extended from Hart Plaza to the TCF building on Washington Boulevard. Pridegoers also were seemingly unbothered by the heat.

“I was excited to be around people in general,” Hazel Park Council Member Mike McFall said. “But it was [also] nice seeing people in-person again since it has been so long.”

Among those people were Gov. Gretchen Whitmer, who made an appearance at Sunday’s parade and gave opening remarks alongside Lt. Gov. Garlin Gilchrist. Whitmer led the parade after delivering a short speech.

“Pride means opportunity for all, no matter how you identify or who you love,” she told Pride Source exclusively before she spoke to the crowd. “Pride means recognizing how far we’ve come and yet continuing to lock arms and see this through and [that] we’ve got work yet to do.”

Wait said he was grateful that Whitmer made an appearance and that her “support is amazing.”

“She’s so gracious to meet and pose with everyone,” he added. “Her staff is wonderful to work with, and her words really summed up what we were doing [at MCP]. It was a really valuable experience.”

During the event, Whitmer sported a black leather jacket with the word “We” written in large white letters. The pronouns “They/Them, She/Her, He/Him” were also painted on the back of the jacket. 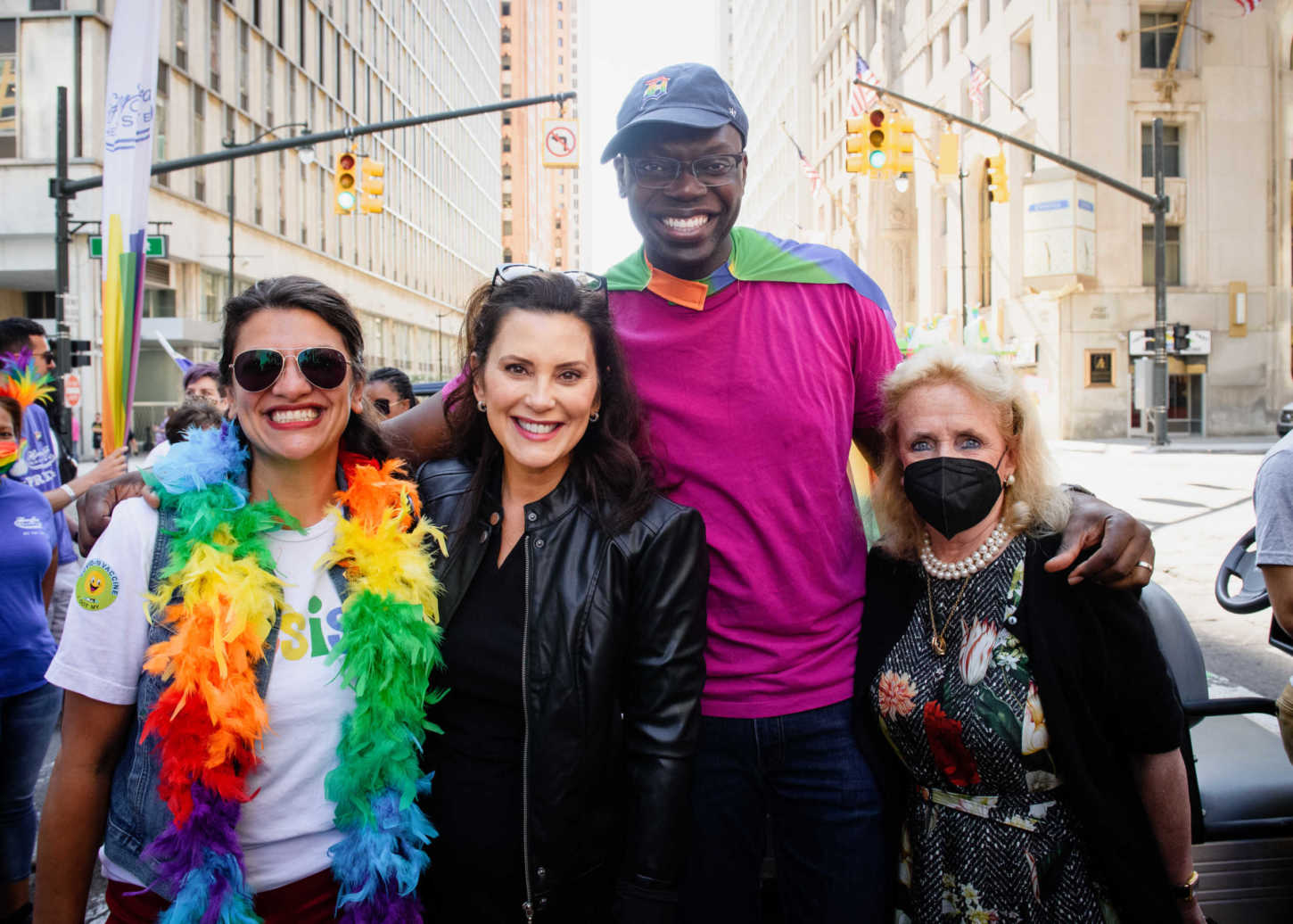 As for the other Pridegoers, they were decked out in head-to-toe rainbow colors and their best cosplay looks, complete with fishnets, garters and corsets. Anna Wintour should’ve been there taking notes for the next Met Gala.

Dom Brooks, who sang backup for Pride performer J. Santino, praised the looks: “One of the themes for us performers was ‘sexy black,’” said Brooks about their performance on the Pride Stage. “My favorite outfit was my long off-the-shoulder dress that had a leg slit on my left side, in addition to the black lace pattern that was on my back.”

Santino said performing at Pride “brought back so many memories of me doing that stage [in 2019]. And I was like damn, bitch, we were here, and now we’re here again.”

As for the next Motor City Pride, Wait says they’re celebrating their “50th anniversary of the first march [they] had in Detroit” in 2022. Organizers will begin planning in November.

About the Author: Jackie Jones

Jackie Jones, a Detroit native, is the News and Features Editor at Pride Source Media Group and focuses on all things media and writing. Her work has appeared throughout Michigan in DBusiness and BLAC Magazine.