After 27 years as a beacon for those in Ann Arbor’s and Southeast Michigan’s LGBTQ community, Common Language Bookstore will be forced to close its doors one final time at the end of 2018. According to husbands and co-owners Keith Orr and Martin Contreras, this comes after years of market pressures that have made running the store unsustainable. To honor their efforts in maintaining the business, Between The Lines is hosting a final farewell party on Saturday, Dec. 15, from 3 to 6 p.m., along with a going list of co-hosts that now includes Sandi Smith and Linda Lombardini from Trillium Real Estate, Unified – HIV & Beyond, Sen.-elect Jeff Irwin, Sen.-elect Jeremy Moss, Rep. Jon Hoadley and Rep. Adam Zenke When asked why she was hosting the party, BTL Co-Publisher Jan Stevenson simply said that it was “important for the community to honor its history.”
“And the people that made the history,” Stevenson added. “And Keith and Martin are certainly that. They’ve been doing the good fight for decades and this bookstore is just one of the many things they’ve done over the last 30 years. It’s important to mourn the loss of the bookstore and to acknowledge the contribution that Keith and Martin have made in keeping it open for as long as they have and to thank them for that.”
Attendees at the party are encouraged to peruse unsold stock, chat with the owners, eat food and take time to acknowledge the loss of a historically significant part of Southeast Michigan’s LGBTQ culture. Stevenson went on to emphasize the significance that bookstores have played as “community centers” for LGBTQ people across the world.
“As a founder of a community center I value that role,” Stevenson said. “Whether it’s an actual community center or a store or a bar or restaurant — wherever it is that people feel safe to congregate and to learn — I know that that bookstore has served that role for people who have either been just coming out, or maybe wanted to learn about their community or their heritage or just to meet other people.” 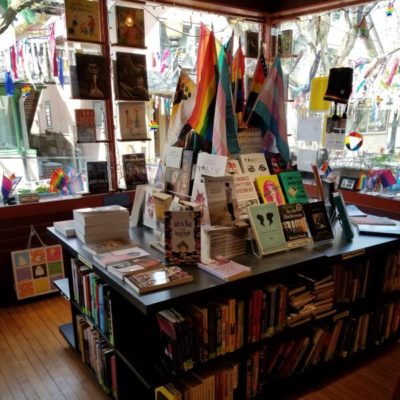 Orr added that bookstores of this type used to be much more common across the states.
“Back in the day, Michigan had four or five LGBT bookstores and I think there were three in D.C. and four or five in New York City. They used to be such a prevalent part of our culture,” Orr said. “You know, in effort to keep it going we’ve had fundraisers and we’ve named them The Last Bookstore Standing and we didn’t quite make it. There’s a few others standing but not many. The last time I counted, I think there were 10 in the U.S. and Canada. That will reduce it to a single digit as we close.”
Common Language is located in Braun Court, inside the Kerrytown District of Ann Arbor. Another reason that the bookstore’s closure is impactful is because the space has become something of a hub for LGBTQ life — Contreras and Orr also own the Jim Toy Community Center, aut Bar and formerly Shaut, a performance space across the courtyard from aut Bar. The couple acquired Common Language in 2003, after a 12-year stint with the original owners.
When asked what he’ll miss the most about his business, Orr said it was the reaction of people who had never been inside the shop.
“You know, it’s really something that a number of people who come in here will say, ‘I’ve just never seen anything like this before.’ Part of it, I think, is that it is in an old house. It has that welcoming aspect of it and that is part of its character. You feel like you’re walking into a house,” he said. “We had the last owner of Oscar Wilde Bookshop, Kim Brinster, stop in at one point and was just gushing over it. That was one of my proudest moments because I loved Oscar Wilde.”
Though the physical store will be gone, Orr added that fans of that unique, Common Language style might be in luck for a while longer yet. There are plans in the works to try and maintain an online presence for the store, though not guaranteed, that would allow customers to buy online.
To find out more about the store go online to glbtbooks.com or give the shop a visit before year’s end at 317 Braun Court in Ann Arbor. For more information call 734-663-0036 or email [email protected].