A record number of out LGBTQ+ athletes took part in the recently completed 2022 Winter Olympics in Beijing, making headlines for their sports while staying true to themselves. The freedom to be out as an Olympian hasn’t always been a given (and even today, athletes in major countries like Russia and China mostly remain in the closet). In decades past, LGBTQ+ athletes have faced persecution and, in some cases, death.

Let’s review the facts. In 1934, German runner and Olympic athlete Otto Peltzer, who completed in 1928 and 1932, was arrested by the Nazi regime and held in a concentration camp for being gay.

Jump decades ahead to 1998, and Canadian swimmer Mark Tewksbury, who won a gold medal in 1992, was battling similar disdain as an openly gay man. Upon coming out, Tewksbury lost a six-figure deal as a motivational speaker for a financial institution because he was deemed “too openly gay,” he said in an interview with YouAreUNLTD.

Since those incidents, times have changed in much of the world. At least 36 openly LGBTQ+ athletes competed in this year’s Olympics alone. And the response to those openly LGBTQ+ athletes was positive compared to the past — allowing Olympians to feel freer sharing who they are. Here are six Olympians who were loud and proud during this year’s Olympics:

Timothy LeDuc, 31, an American pair skater, made history this year as the first openly gay and nonbinary winter olympian. At the age of 18, LeDuc came out as gay, and just last year they came out as nonbinary. LeDuc and their skating partner Ashley Cain-Gribble were welcomed with warm regards. “To see the people reaching out to both of us really means a lot,” LeDuc said, according to Centre Daily Times. “It also reminds us that we are one of many, laying the ground for more people to come. I know for me to be openly nonbinary is only possible because amazing, great people before me had laid the groundwork for me. 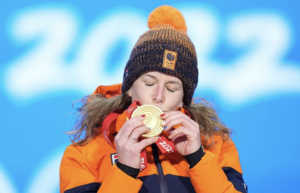 Wüst, a 1,500-meter speed skater who won gold, was another Olympian who made history. This year, the openly bisexual athlete became the first known out LGBTQ+ competitor at the Beijing Olympics to win a medal. She later followed up with a bronze medal in the Women’s Team Pursuit event, bringing her two wins. This year was not Wüst’s first time winning a gold medal — she is also the first athlete in history to win individual gold medals in five straight Olympics.

After a record-breaking Olympic career, Wüst has confirmed that she will be retiring. Instead of competing, she plans on getting married to her girlfriend, Letitia de Jong. “I always say age is just a number,” she told The New York Times. “But I’m 35, and I really want to have children, so at some point, you have to quit.”

Kenworthy may not have won any medals or made history this year, but the skier made a major impact by his presence alone. He was a proud, vocal, openly gay man throughout his run a few years ago. “I think for anybody that wants to come out but is struggling, I’d just encourage them to try and live their truth or speak their truth, even if it’s just to one person,” said Kenworthy in an NBC article. “It’s such a liberating experience to tell someone.” Kenworthy is still remembered for kissing his boyfriend live on national TV before his Olympic competition in 2018. 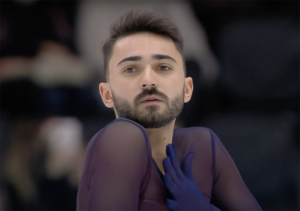 Aymoz, a five-time French national champion figure skater, competed in the Olympics for the first time this year. He is an openly gay Olympian who came out in the 2021 documentary “We Need to Talk.” As one of six athletes in the film, he said his purpose was “to help open the conversation about homosexuality in sport.” “As I told the directors: when I first came out, I had put a bandage on a wound,” he told Olympics.com. “But now with this documentary, talking about it publicly and freeing myself gave me the opportunity to remove the bandage and let the wound breathe. And there’s no wound anymore. It was over. It made me feel good.”

Blaser made history as the first out gay man to represent the US in the Olympic sport of skeleton. During one of his races in the 2022 Olympics, he made it known that he was loud and proud by racing with a rainbow saddle on his sled that was gifted to him by his teammate Sara Roderick. Blaser said the small visibility of LGBTQ+ pride was “kinda fun” and made him smile. Blaser first started to make headlines in 2021, when he mentioned that he wears fingernail polish while practicing and competing. “When we’re going to sliding and practice, I think it’s kind of funny and it’s a little bit of shock value,” he told Outsports. “Just making people turn their head and kind of catch them off guard, which is a little bit of what I do with my jewelry and even my race suit, which is snakeskin.”

Bowe, a speed skater, became the first openly lesbian athlete to earn a spot in Team USA for the 2022 Winter Olympics. Since competing in the Olympics, she has done nothing to hide her sexuality. In 2017, she told NBC that she was dating the Dutch speed skater Manon Kamminga. “It’s nice being with somebody that has the same passion, same drive, same goals,” Bowe told NBC, according to LGBTQ Nation. “It’s obviously difficult living on different sides of the world. But we’re both focused on our goal. She’s trying to make her team. I’m trying to make my team. So it just works out.”

About the Author: Jackie Jones

Jackie Jones, a Detroit native, is the News and Features Editor at Pride Source Media Group and focuses on all things media and writing. Her work has appeared throughout Michigan in DBusiness and BLAC Magazine.