Dean Nasreddine: On a Voting Mission

Dean Nasreddine is on a mission. The 24-year-old queer activist and NextGen Michigan field organizer is determined to ensure that every young adult in Michigan is registered to vote. And he’s planned a social gathering to give everyone that opportunity. This Friday, July 27, at Affirmations in Ferndale, all are welcome to enjoy an open mic. night and voter registration drive called What Makes Us: A Night of Activism, Community & Performance.

NextGen Michigan, the statewide initiative of NextGen America, is working to register, engage and organize young voters. As of this month, NextGen Michigan had registered 12,911 young voters, fueled by the energy of more than 218 volunteers and 40 organizers over a six month period.

Nasreddine explained that his job as an organizer for NextGen Rising, the specific division he works for, is “to connect, engage and educate the electorate.”Mainly, Nasreddine seeks out unregistered voters in the youth bracket (age 18 to 35). He then gets them registered in their area and on to the polls in August and November. 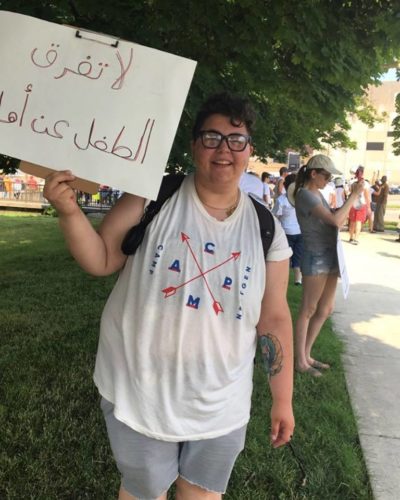 “I’m emailing and networking and trying to find a channel for us to be there and to get NextGen’s name out so that people know that it’s super easy to register,” Nasreddine said. “Because I think that, specifically for that age bracket, we aren’t given the civic understanding [of] how voting works, how we figure into the democratic process.”

And he’s not the only one. Many young adults from NextGen are canvassing, showing up at rallies and protests, speaking to local groups, tabling at events and bringing their clipboards and enthusiasm. They can even be found at local shows like Lady Parts Justice League’s recent Vagical Mystery Tour. And it’s all with one thing in mind: voter registration.

“I guess I had always kind of felt like I didn’t understand why oppression happened,” he said. “When I was young, I didn’t get why people were the way that they were with other people. Like, how do you treat someone like this? It made me mad.”

It was through studying history that Nasreddine channeled his interests and his energy.

And when he came to that realization, discovering his passion for history, being conscious of his Arabic identity and coming out as transgender all came together.

“It was hard to understand myself as an Arab queer, within the context of the broader, white world I lived in. There’s part of me that goes to school every day, to work, and I’m seen as ‘white-passing’ and queer or, like, gay or whatever,” Nasreddine said. “It’s fine, I get shit sometimes from people on the street … but then I go home and it’s the same thing, but amplified because it’s my family doing it.”

Today, Nasreddine describes his relationship with his mom as great.

“But it was very, very difficult. Especially coming out as transgender and the whole process of hormones and actually transitioning,” he said. “It was an uphill battle.”

He believes that through her experience surviving cancer, his mom came to realize “there are worse things that could happen than my kid feeling this way and wanting to do this.”

The genesis of Nasreddine’s activism was his involvement with Planned Parenthood and participating in protests well before organizing and mobilizing became his full-time job. He became more engaged as a student at Oakland University while majoring in history with a minor in women’s and gender studies.

“When I started learning about the queer rights movement … I was like, ‘Wow, this is something that can be done,'” he said. “It’s hard. It’s really difficult when you’re a jaded college student and you’re angry that Trump was elected president in your junior year, and you feel hopeless, right? And I see my peers around me who feel helpless, and they’re like, well, ‘Fuck it. Fuck the system, it doesn’t work.’ Sure, the system’s broken, but what is it going to do for you to just sit here and complain about it?”

While Nasreddine continues to feel frustrated with the apathy he sees, particular among young LGBTQ people, he takes it in stride. Nasreddine has a message for those whom he thinks are disillusioned when he hears they only vote in presidential elections.

“My biggest thing is that I think that folks who are angry with the system as it stands (need) to look at their local politicians that are out there for elections and re-elections,” he said. “Because I think that local politics … is what’s going to affect you way more, I think, than a federal legislature will. You can’t just start with the president.”

As secretary of OU’s Gay Straight Alliance, Nasreddine organized a recurring event called Slam for Solidarity, which inspired the upcoming event at Affirmations. Speaking of What Makes Us, he explained that at its heart, it’s a voter registration drive, but it’s also an outlet for the LGBTQ community to speak on things they might not otherwise feel comfortable sharing elsewhere. All performers, musicians, poets and dancers are welcome.

“I also think that performance is one of the better ways to actually get your feelings out,” he said.

Nasreddine himself is a spoken word poet and will be performing at the upcoming event.

“I use poetry myself to synthesize my own feelings,” Nasreddine said. “I think the biggest thing about performance is the resonance with the audience. To understand and connect with someone, and understand that it’s echoing in someone else’s chest, too.”

Perhaps Nasreddine’s passion for human connection through art has given him perspective onto the political process. But, whether that’s true or not, his main message is clear: Be hopeful. Even if you feel like giving up.

What Makes Us: A Night of Activism, Community & Performance will be held Friday, July 27 from 6 p.m. to 9 p.m. at Affirmations, 290 W. 9 Mile Road, Ferndale.
Please direct all questions to Dean Nasreddine at [email protected]