Did Judy Garland’s Death Really Cause Stonewall? Was There Even a Brick? Sorting Stubborn Myths from Reality

For years, people have debated what actually happened that night in June 1969 when the Stonewall Inn in Greenwich Village, New York City was raided and a new, more militant struggle for equality was born. Due to the debates — and insistence of some who claim they knew all aspects of what had actually happened — an incredible void opened up where people could invent, imagine or distort Stonewall and our history to their own objectives. The myths of the Stonewall Riots (or the “Stonewall Uprising,” as it’s often called) are endless, but they’re easily dispelled when you look at the material proof and plain logic.

1. Judy Garland’s death and funeral did not cause Stonewall.

The myth of Judy Garland’s death being the impetus for Stonewall is the most belittling to those of us who participated. It’s stereotypical and self-loathing, and with this article we add new information which finally ends this silly tale.

One clue is where the idea originated: from a conservative, straight columnist at the Village Voice named Howard Smith, who actually was a friend of the police captain who led the raid.

Simple logic says it’s just not so. People of my age — late teens and early 20s at the time — were not dancing to Judy Garland in the Stonewall Inn. We were dancing to Diana Ross, Beatles and Barbra Streisand. My best memory is dancing to the Fifth Dimension song “Let the Sunshine In,” which is from the musical “Hair.” Judy Garland was of an older generation. We wanted to dance our asses off when we were in Stonewall, and that you didn’t do to Garland’s music.

But the final nail in the Judy Garland myth are articles about the funeral at Campbell’s Funeral home. If you look at the photos and reports in The New York Times, as well as other newspaper reports, you’ll note that the subjects in the photos, as well as the majority of quotes, are from housewives. When you look more closely for the very few men in the photos, they’re in suits and ties. We all know that is not the kind of person who fought at Stonewall. Men who wore suits and ties ran from the police for fear of losing their good paying jobs (or their families finding out about them).

It’s time to bury the Judy Garland myth for good. The myth makes Stonewall sound like the only riot in U.S. history making its participants fight for a silly cause. The truth is that we were fighting the hate and oppression of the police that night. We were not empowered by a dead singer. Let’s put that coffin into the ground already.

2. Nobody knows exactly how many people were at Stonewall. 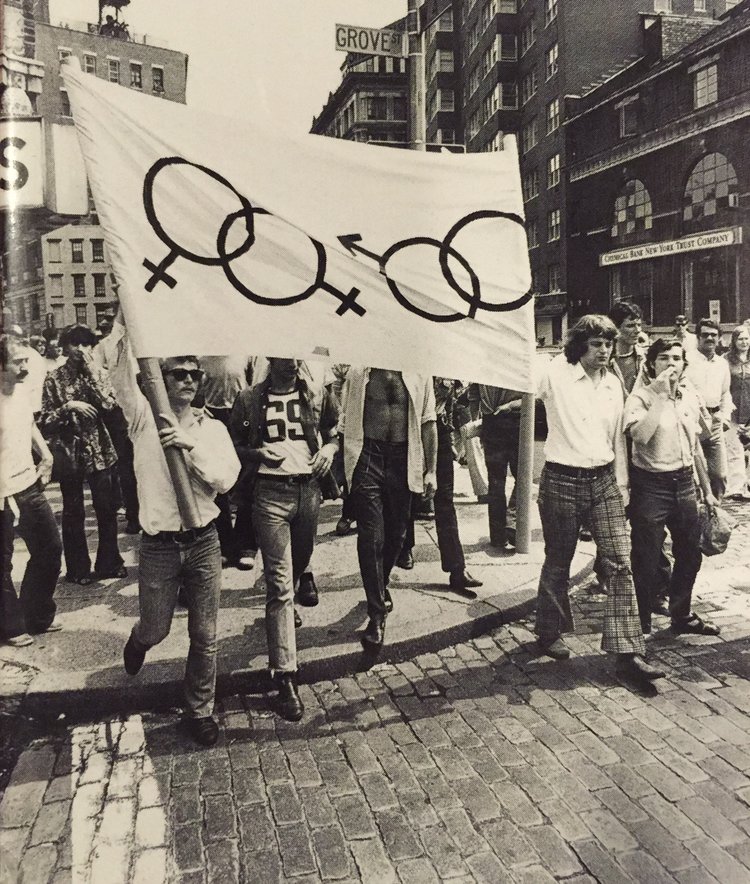 I was recently filming a BBC television show in front of the Stonewall when a tour group came by. The guide stated “There were 105 people in the bar that night.” But nobody can possibly know how many people were there. Some people paid for entry and some were regulars that were let in without the door charge. Still, that number does give an idea of the average size of the crowd inside.

As we all know, once people were let outside, those with any standing in society ran for the hills as soon as they could. Those of us who remained — street kids, drag queens (later to be called trans), people of color and the verging radical gay youth of the day — gathered around the door in a semi circle.

There were hundreds of passersby and even more who craned their necks from a distance. That night went on for hours, so anyone who was within a few blocks could say they were at Stonewall that night. But actually participating is another matter. Anyone who says they know how many people were there must not have actually been there, since it occurred in various areas of Christopher Street and around Christopher Street. You don’t take a roll call in the middle of a riot.

Those people who tossed stones or cans of soda, or those wrote on the streets and walls “Tomorrow Night Stonewall” as I did, all went on to be a part of Gay Liberation Front (GLF), which arose from the ashes of Stonewall. Some GLF members were there during the first night. Other GLF members stood and spoke from the doors of the closed Stonewall the second night. More GLF members began leafleting the following nights.

So who can we say was there? Well, anyone who had family in the area or a decent job ran for the subway or a cab as soon as they were let out of the bar. Who was left? Drag queens, stereotypical men and women, street kids like me who were homeless or living at the YMCA, and young activists like Marty Robinson. Since the riot created the the urgency for change, Gay Liberation Front picked up that mantle and ran with it. Stonewall and GLF are synonymous. When asked who was there at Stonewall, my answer is: Who was there the following night and the night after that? Who carried out that change through that first turbulent year? We have pictures and written accounts. This is no myth. There are facts in plain sight.

3. Stonewall lasted several days, and then an entire year.

There have been numerous suggestions about how long Stonewall lasted. At one museum I was speaking at — during the opening of their Stonewall Rising exhibit — they had a sign which stated one number. Then, someone else wrote about the exhibit and put another number. When I’m asked that question, I say confidently that Stonewall went on for 365 days, from the first night until the first Pride one year later. That spirit in June 1969 carried on with the changes that Gay Liberation brought from it. We were self-identifying ourselves for the first time in history. We were out, loud and proud rather than in the closet.

We took back our streets from the police. We organized legal and medical alerts. We had social and political meetings. All of that threatened the police, since much of it was illegal for “homosexuals,” and we did it in plain sight and even advertised it. We dared the police to stop us.

One last thing: We were diversified and inclusive. It took 365 days to create that change. 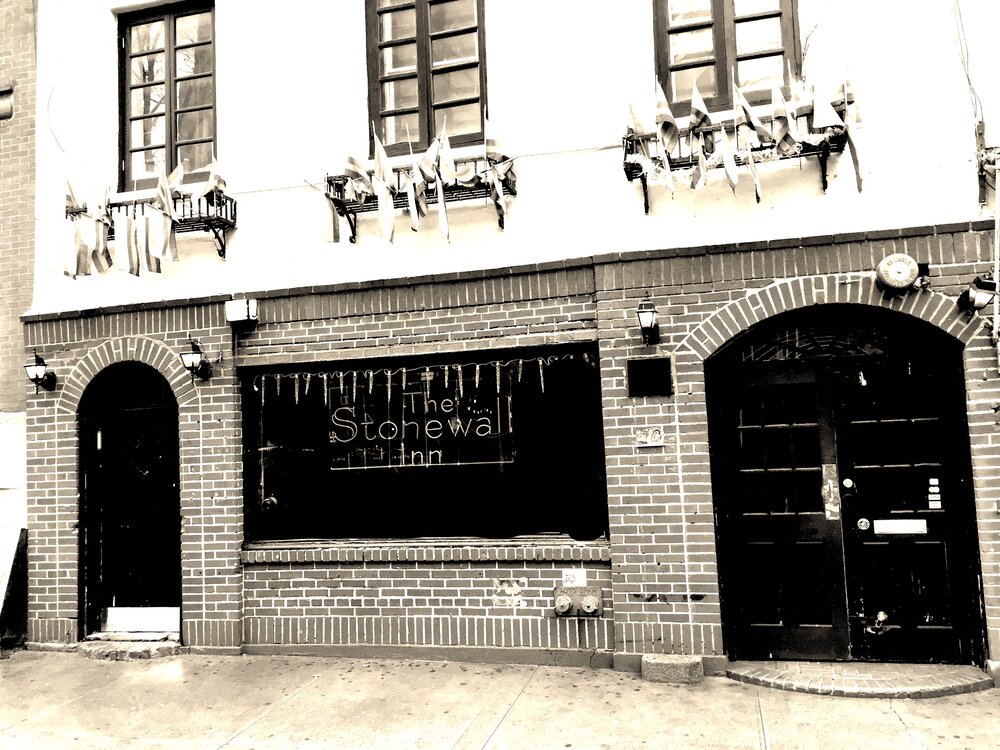 It is often stated that my fellow GLF member, Sylvia Rivera, threw the first brick. Although it’s flashy and bombastic, that myth actually does not give her her rightful place in history. Both Sylvia and her GLF sister Marsha P. Johnson have spoken about where they were during Stonewall, and people today have either ignored their words or distorted them.

What cannot be disputed is that Sylvia and Marsha did something much more important than throwing an imaginary brick. They created the world’s first trans organization, Street Transvestite Action Revolutionaries (STAR). STAR gave visibility and Pride to the trans community for the first time in history. STAR was not one night but an entire movement. Sylvia is more of a historical figure for co-creating that first trans organization than for being just one of a crowd at Stonewall. That cannot be disputed.

If you’re still hung up on the brick idea, The New York Times did a video dispelling it in 2019.

5. Who created the first Gay Pride?

Here is an answer that is well-documented and known by each of us who lived this history: The two people who actually came up with the idea of Pride were Craig Rodwell and Ellen Broidy. They were having dinner in Craig’s apartment with their partners at the time, and they began putting down a resolution that would be read at the Eastern Regional Conference of Homophile Organizations meeting in Philadelphia. That resolution created the Christopher Street Gay Liberation committee, which went on to organize that first Pride one year after Stonewall.

It is often reported that the “mother” of Gay Pride is Brenda Howard. That is absolutely false. There are numerous members of Gay Liberation Front or Christopher Street Gay Liberation committee who are alive today. We know who created Pride because we were there when it took shape.

If anyone is going to be deemed “mother of Pride,” it’s Ellen Broidy. Brenda Howard was a member of GLF, but she was not in any way associated with the formation of that first Pride other than to march in it. She may have someone editing Wikipedia on her behalf, but that doesn’t make that falsehood any less false.

6. The most accurate history of Stonewall is a collective one. 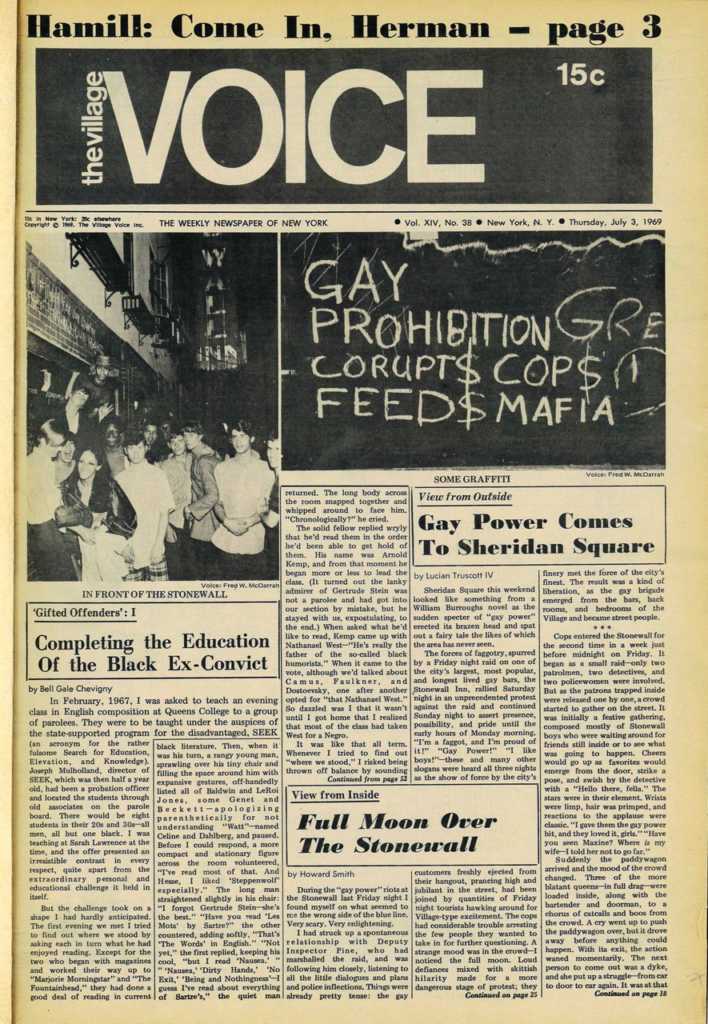 There are many views of Stonewall, but the majority of its participants went on to form GLF. We are the spirit of Stonewall. Each GLF member who was there relies on their personal memories, and those memories collectively weave a fuller picture. Numerous books on the subject have been written. There are two books that stand out: The first book written on the subject was Donn Teal’s “The Gay Militants” in 1971, the other is David Carter’s “Stonewall: The Riots that Sparked the Gay Revolution” published in 2010. While Carter’s version has some flaws, it comes closer to any version, before or after. He wrote at a time when our community was beginning to realize the importance of Stonewall historically and at a time that many different viewpoints took hold. He literally had to duck to keep out of the way of warring parties on the subject, which can be read about in other books.

Carter continued to research the issue and had a passion for finding the missing points and bringing facts forward until his death in 2020. Others (who were not at Stonewall, mind you) unfortunately write with their bias at the forefront. Many of us who were there continue to pass on lost information or leads. We feel that our personal battle that night has been used to reinforce people’s own misconceptions and political objectives.

It wasn’t that single night that changed and built our community. It was from the ashes of that night that Gay Liberation Front created self-identity, community and Pride. Change doesn’t happen overnight. In this case, the seeds of equality took 365 days to take root. It was that first magical year of gay liberation.

Mark Segal is an award-winning journalist, author, and Stonewall pioneer. More information on his 50 plus years of continuous activism can be found at marksegalstonewall.com/.

About the Author: Mark Segal

Mark Segal is an award-winning journalist, author, and Stonewall pioneer. He is also founder and publisher of Philadelphia Gay News. More information on his 50-plus years of continuous activism can be found at marksegalstonewall.com.