How the Design and Function of Nature Is Impacting Auto Manufacturing

“It all started with a Beetle.”

In Rich Altherr’s case, it’s a little of both.

Altherr, 48, is definitely a “car nut” engineer. And while he’s not an entomologist, he is fascinated by the design and utility of nature. He combines both in his application of biomimicry in the automotive industry and as Director of Biomimicry for Metropolitan Museum of Design Detroit (MM-O-DD).

Altherr, who was born in Michigan and has lived here for the majority of his life, describes biomimicry as “the practice of looking under the hood of nature to kind of see how it works and then applying these billions of years of sustainable and regenerative design solutions to human challenges.”

In other words, when it comes to design and function, nature can be an excellent model. On his website, Nature Comes Standard, Altherr gives the example of how an electrical engineer designing a new automotive sensor might look at the way a platypus searches for food by using its duck-like bill to detect the vibrations of prey at the bottom of a pond. Another example is an engineer looking at how locusts move in swarms of thousands without colliding — insights that can help biomimicry engineers improve the safety of autonomous vehicles.

There are, of course, those who use the argument that nature’s design is proof that homosexuality is not natural. But Altherr, who is gay, dismisses that.

“I would challenge them to do some more biological research because there are examples of homosexuality in nature,” he says. 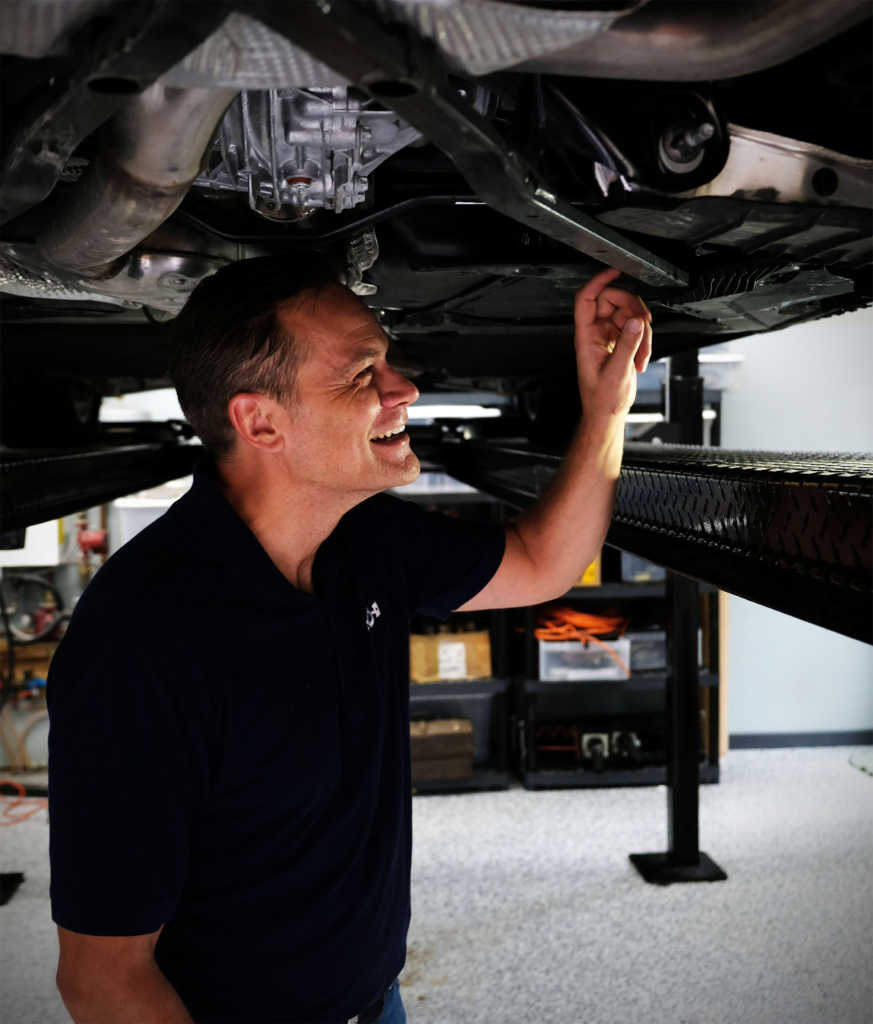 Altherr traces his love of cars back to when he was 2 years old.

“My very first babysitter,” he says, “had a 1970s Volkswagen Beetle.” The babysitter’s name was Leola Reynolds, and 2-year-old Altherr called her “Reynol Reynol,” which is also what he would say every time he saw a Beetle.

He was in love. (With the Beetle.)

Right down to the smell of the horsehair interior, a young Altherr was hooked. His parents encouraged his interest in Beetle trinkets and toys. When Altherr was 14, he restored a 1975 Beetle, which he still has.

“That’s why I became an engineer,” he says. “Not because I’m a math and science genius. I just love cars.”

He also loves the environment. In the early 2000s, he made personal changes: installing energy-efficient light bulbs in his home, buying organic sheets and towels, installing solar panels, seeking out goods made from recycled materials, and adopting a vegetarian diet. This left him wondering, “How can I carry this over to my work?”

So after 20 years working in the automotive industry, including Chrysler, he “fell in love with the entire concept” of biomimicry and pursued a Biomimicry Specialist certification and a Biomimicry Master’s of Science from Arizona State.

“After years of seeing how vehicles are designed and then their deterioration, I really had this strong inclination,” he says.

He found himself asking, “How can I make my designs more sustainable?” and “How do I apply that to an age-old industry that has a legacy to it that’s difficult to change?”

Altherr acknowledges that the automotive industry has been slow to adopt sustainability. “But as we see, they are moving in the right direction.”

There’s also the issue of development and being able to prove new technology before it goes on the market.

“A few of those little things have kind of hindered their approach, but I definitely see a lot of great things coming out now that are very exciting,” he says. He cites Ford’s announcement that they are investing over $11 billion in electric vehicles with new plants in Tennessee and Kentucky that Ford describes as “massive, environmentally and technologically advanced campuses.”

“Excited to see what comes out of that,” Altherr says, noting that the large number of electric vehicles that will be rolling out in the next couple of years is promising.

Consumer demand is an important factor. Altherr says that electric vehicles have long been relegated to little side projects for auto companies, “But now customers actually want these [and] if the customer wants it, they can build more.”

And while automotive manufacturers have not made a full-on commitment to biomimicry, each company has aspects of biomimicry at play when dabbling in research and development.

“It is a tool,” Altherr explains. “It’s not a complete replacement for design practices. It’s an added lens to the current design process.”

But it’s not just cars that biomimicry is being used for. Altherr is currently working on a sustainable highway in Georgia called The Ray Highway, an 18-mile stretch of road outside Atlanta in LaGrange. “It is a testbed for sustainable and regenerative design in highway and transportation,” he says.

Part of the project is looking to nature to create new road surfaces like “concrete that is sequestering carbon and doesn’t take a lot of energy to produce,” he says. “And there are examples of that in nature. The coral reef is essentially cement that is underwater that pulls carbon from the water.”

The Ray is also “a testbed for connected autonomous vehicles,” Altherr explains. “So what we’re doing, we’re looking to nature. How does nature sense and respond?” He points to locusts and starlings, which “move in sync without ever hitting each other.”

Altherr’s dream project is what he calls the “biomimicar.” He says the biomimicar would take cues from nature for not only the vehicle’s design but the manufacturing process. “All the way up and down the supply chain,” he says, “[the biomimicar] has been impacted by sustainable design.”

This vehicle would clean the environment as it drives down the road, reversing the damage that older cars have done. “For every new car, it’s now cleaning up the past.”

Altherr, like anyone who cares about the natural world, is very concerned about climate change. “That’s why I’m working every day to help reverse it,” he says. He advocates that people who want to make changes to be more earth-friendly start small like he did: Make environmentally-conscious purchasing decisions, reduce meat consumption and think about how that styrofoam coffee cup could be replaced with a reusable one to reduce waste.

“Meet people where they are at,” he says. “When I started my environmental journey, I don’t know that I would have just leaped to biomimicry.”

Altherr doesn’t see nature and industry as adversaries. “How can there be a mutualistic relationship between the two? he asks. “There is a balance where an industry can receive the goods of nature while at the same time giving back to nature.”

Industry is consumer-driven. “If nobody cares, then why should industry care?” As consumers are demanding, say, electric cars, the industry is responding. The shift may be slow, but Altherr says it’s happening.

Biomimicry isn’t just a tool for design; it’s a way to connect with the natural world.

“As people use biomimicry,” he says, “[they] become more connected with nature.”

And when people are more connected with nature, they are more compelled to address threats to the environment like the extinction of plants and animals.

“Biodiversity is a critical element of biomimicry,” he explains. When people reconnect with nature, “they see the purpose of having those organisms to learn from. I see it as a slow way to reverse that loss,” he says.

Biomimicry is a complex field, but for Altherr, the fundamentals are simple: “If people feel more connected to nature, then they’re more likely to conserve it.”

Learn more about biomimicry and bio-design at the Metropolitan Museum of Design Detroit’s exhibit, “Biomimicry: Design in Nature,” on display at Collected Detroit in Corktown through December.