Philemon Chambers can’t believe he’s in a queer Christmas movie. It’s the kind Chambers, recently named “Next Big Thing” by the Hollywood Reporter, could only dream of watching when he was a little queer boy growing up in Compton, California. Then, Black queer characters in mainstream film and TV didn’t exist, and when they finally did, those characters were in the closet or shamed for being out of the closet.

Much has changed since for Chambers, and for the better. Now, the 27-year-old actor, who could previously be seen in small TV roles on “Criminal Minds” and “All Rise,” is the change he always hoped to see in “Single All the Way,” Netflix’s addition to the LGBTQ+ holiday rom-com boom of the last couple of years. Here, queerness is incidental to the sweet, marshmallow center of this love story.

In the film, Chambers plays the adorably likable Nick, who accompanies his roommate and longtime friend, Peter (Michael Urie of “Ugly Betty”), on a trip home for the holidays to see Peter’s family in New Hampshire. It’s an especially kind gesture given Peter has recently learned that his boyfriend is married to a woman. Though Peter’s mom (Kathy Najimy) desperately wants to connect her newly single son with James (Luke Macfarlane), the rest of the family does everything in their power to help Peter and Nick see they’re more than just friends.

Recently, Chambers chatted about the humbling responses he’s received about “Single All the Way” from LGBTQ+ people around the world, how he and Urie developed their chemistry over Zoom, and the message he hopes the movie delivers to young Black queer kids.

This seems like a really big moment for you. Does it feel that way?

It still is a euphoric type of moment. I’m not overwhelmed because it’s a good feeling to finally have this film out ’cause we’ve been talking about it for such a long time. To have it out and to see the response that people are having toward it and the love that it’s garnering — wow, I’m gobsmacked.

What’s it like to be a part of the queer Christmas streaming movie boom that started last year?

It’s nice that these types of stories are being told and that they’re being told authentically by queer [and] gay actors. It’s monumental in that respect because usually they hire a heterosexual actor to portray a gay character. So it’s not an accurate depiction of them, of us. It’s not.

I feel like the films that were released, we needed them at that time. But we really need “Single All the Way.” “Single All the Way” is the first film of its kind to not hold onto the homophobia and not hold onto any negativity. It is pure joy, pure love, pure happiness. And I’m glad that we’re moving in this direction. I can’t wait to see what happens and what comes from it. 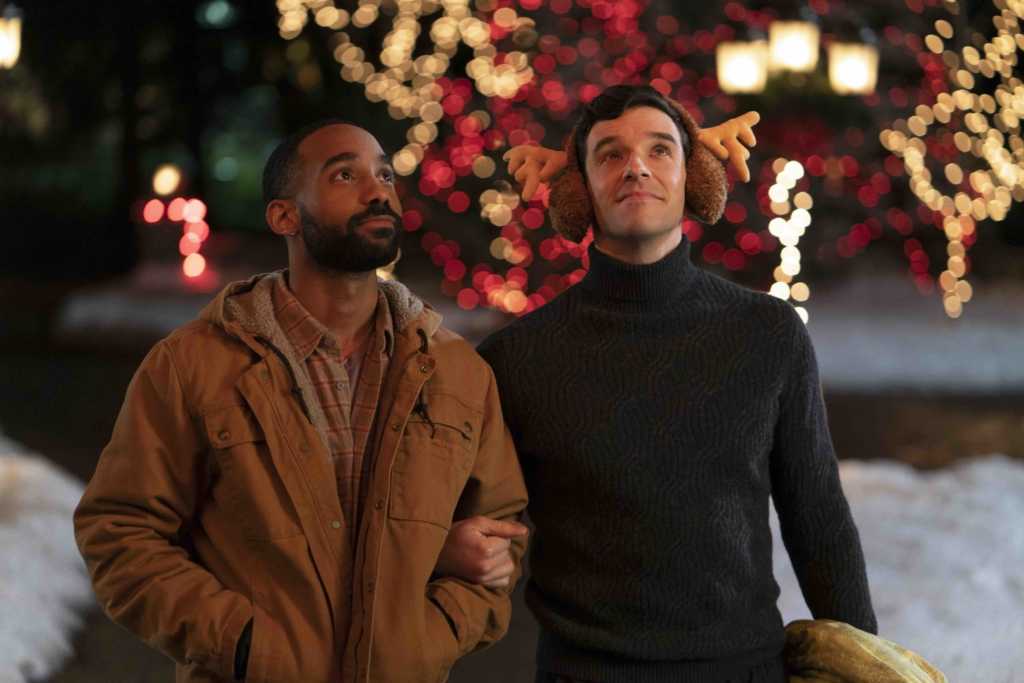 Philemon Chambers as Nick, and Michael Urie as Peter, in “Single All The Way.” Photo: Philippe Bosse/Netflix

Are you and Michael sharing in the splendor of what being a part of this movie feels like right now?

Me and Michael actually had like a 15-, 20-minute conference last night just about how much love we are getting. Everybody is loving Peter and Nick. Everyone is loving the story. And I could not imagine doing this and going through this with anybody else other than Michael Urie. He is such a gem. But yes, we talk literally every day. He’ll respond to me when he wants to respond to me, ’cause I know I’m a little bit annoying.

I watched this with my mom, and it was a powerful thing to be able to watch something with her that’s authentic to my experience as a gay man.

It’s nice to have something like this where you don’t, again, see that homophobia, you don’t see the negativity behind it. But you see a family rallying behind their son. I feel like that is so monumental to have. I got a Twitter DM yesterday from a gentleman; he lives in a different country. And he was saying where he is, it is a crime to be gay. He watched the film and he had said for the first time he felt like he had been seen. And that gave him hope.

That must mean a tremendous amount to you.

I cried. It means a lot to me that it’s affecting people in the way that it affected me. It’s a beautiful thing to be able to stand in the forefront for people and be that conduit. Like I said in another interview, Nick made me accept myself even more.

In what ways did playing the character make you feel more comfortable with your sexuality?

It’s different when your life is private. It is such a difference when you’re not in [the] public eye, when people really don’t know who you are. It’s easier to live your life how you wanna live your life. You can go out. You can be with your boyfriend or your girlfriend, whatever. But there is a difference when now you are in [the] spotlight and people are trying to figure out who you are, what you do, who you’re dating. I’m like, “Why do you wanna know who I’m dating?” I’m single. I do feel like I’m like Beyoncé — you know, the relationship is private until [points to his finger and motions putting a ring on it]. Just saying.

I just feel like that’s a personal thing. But with accepting myself, I accepted myself. I did. If people would ask, I would tell them. But it was more the liberation that I got from playing Nick, because Nick is how I am with my family. My mom is just like, “OK, is this the boyfriend?” I’m like, “Mom, no. It is not. This is a friend.”

When I got home and I really sat down and got to think about everything, I was like, this is the representation that I needed when I was a kid. And now I’m gonna have to talk to people about this and I’m able to now, versus before it was a touchier subject. I’m like, why not stand in the forefront? Why not be that vessel? Why not be that conduit to embrace fully who I am? I feel like as we get older, the idea of trying to put on for people should go away. I’m just at that point in my life where I genuinely love who I am. I owe a lot of it to Nick, in [the] sense of how he is and how the Harrison family was with him. It just showed that these types of things can be normal.

Did Michael give you tips on navigating being out in the public eye?

Michael gave me more tips on how to navigate the industry in a sense of just being an actor. He has been truly a blessing. So has Jennifer Robertson (as Lisa, Peter’s sister). So has Kathy Najimy (as Carole, Peter’s mom). So has Barry Bostwick (as Harold, Peter’s dad). Even Jennifer Coolidge (who plays Peter’s Aunt Sandy) has given me advice. Rookie amongst veterans.

What advice did Jennifer Coolidge give you? And was there any bend and snap action on set?

You said bend and snap? You talkin’ about [does a little snap]. Jennifer Coolidge, her advice was, “Have fun.” Jennifer Coolidge’s approach to everything — she does not know what she’s gonna do until she does it.

The chemistry between you and Michael seemed so easy.

The thing about being in a pandemic is everything is over Zoom. Me and Michael, we did our chemistry read over Zoom. And we had to give chemistry over Zoom, which is kind of a tough thing to do because it’s hard to sometimes articulate. But honestly, when me and Michael started, everything clicked. It was an automatic thing. It was not forced. We were able to play off of each other over Zoom. I remember getting off of Zoom and going into my sister’s room and being like, “I don’t know what just happened, but I love it.”

What does it mean to you to be a queer person of color playing this character?

I echo this a lot: I am what I needed when I was younger. It’s one of those things where I still have my pinch me moments. To be at the forefront where there is a story out there for young Black men who are maybe questioning themselves or already know who they are, that is positive, that [says] you can come out, you can say these things, you can be yourself, and there is a family out there that will love you, genuinely and unconditionally for who you are — it still is one of those things where I am still taken aback, still humbled. I’m just very, very grateful to have this moment. I text my team every day — I even message Netflix [laughs] — And I’m like, “Thank you so much for allowing me the opportunity to be a vessel and to be a conduit.” It means the world to me.

What about a sequel? There’s been talk, and you can tell me. This is a safe place.

The non-answer answer to that is, Chris, if you must know, Netflix is amazing. And you know, there’s no telling what you’ll see from Nick and Peter.

You know what? I feel like, if anything, what should happen is Nick and Peter should be in the pageant. We could do a whole little thing. We could act along with Aunt Sandy. I’m just saying.

She’s a tough director. Do you think you have what it takes to be in her pageant?

You know, I can scream. And I can remember my lines.