Michigan Lt. Gov. Garlin Gilchrist’s LGBTQ+ allyship began when he was just a kid because of, he says, “someone I had a great deal of love for.” That person was his Uncle Glen.

“He’d design men’s and women’s clothes,” Gilchrist shared with Pride Source, “and I remember begging him to design me a pair of MC Hammer pants. He did that and gave them to me. And it was magical, as a child.”

At one point, Uncle Glen passed on a suit he wore often in high school, an outfit Gilchrist loved wearing. Sadly, Glen Gilchrist died of complications from HIV in the late ’90s.

So, did the the lieutenant governor have a guncle?

“I certainly knew and loved him as a baby and always admired him,” Gilchrist said.

As to whether allies are made or born, clearly, Gilchrist was born and raised that way. He reflected on what he considers his good fortune to have queer family.

“I think what’s important is to recognize that we need to love and care about one another, period, as human beings,” Gilchrist began, “and your gender identity, your expression, your sexual identity or orientation should not define how lovable you are and how lovable you can be by your parents, by your friends and by your community.

“Being exposed to members of your family who may be LGBTQ+ is a way to gain an understanding of that at an early age,” he added. “And I was very blessed to have that experience in different parts of my family, whether it’s distant relatives or immediate family members. And so I think that I certainly have become better because of that, and I hope that everyone can be blessed with that experience.” 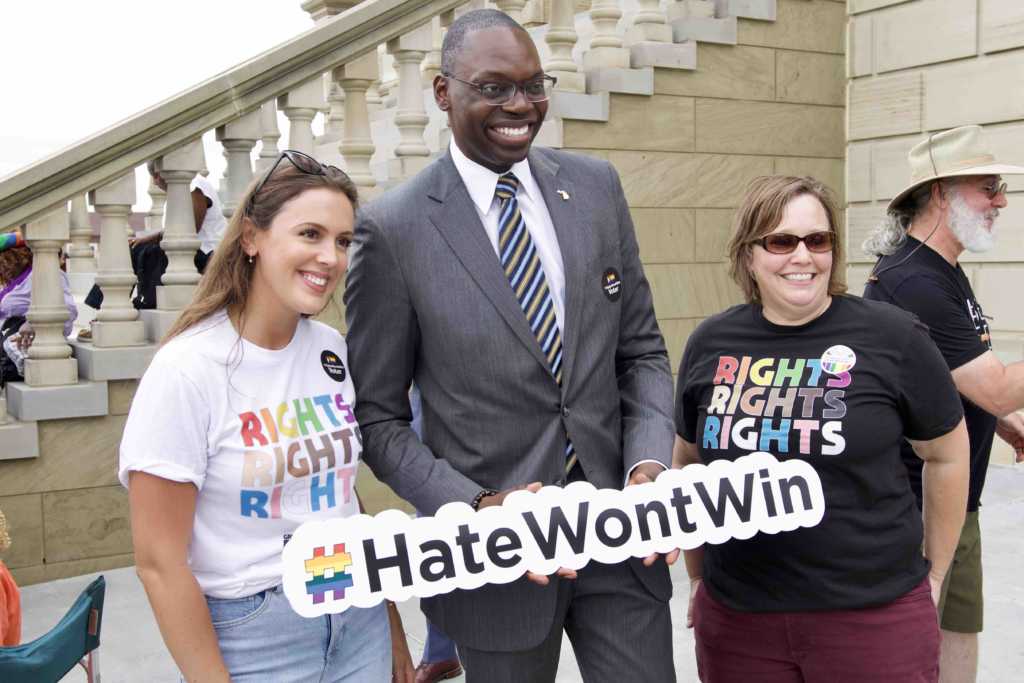 For Gilchrist, allyship doesn’t stop with the family in which he was raised. He’s also setting an example. He says as a public official, it’s important to serve all Michiganders and to have his family with him. “I held the title of being the highest-ranking public official to ever attend Ferndale Pride for maybe six or seven months. And then both the Governor and the Attorney General jumped me like six months later — but that’s all good,” he said, laughing.

Just showing up goes a long way. But Gilchrist has gone above and beyond, bringing his kids to Ferndale Pride and keynoting the Affirmations Big Bash this September. As someone who had a career as an activist before entering politics — most notably as national campaign director for MoveOn — Gilchrist doesn’t just show up; he speaks out, too.

In response to a homophobic social media post by an NAACP official, Gilchrist delivered an address on Black gay civil rights activist Bayard Rustin at the organization’s Flint fundraiser in 2019. He said Rustin, as one of the first civil rights leaders he studied in his training as a community organizer, has motivated his leadership.

“I learned about him in the context of being a person who maybe a lot of people may not have heard of,” Gilchrist said, “but who was a very skilled and influential organizer who was also a gay Black man. And so for me, I wanted to share this story in that particular set of remarks to let folks know that LGBTQ people are here and are present and are having an impact in all areas and aspects of life. And that is a good thing.”

Gilchrist said the civil rights movement was stronger because of Rustin. He said he wanted to bring attention to his role as a leader and as “a Black gay man standing up and fighting for all of our civil rights. And that certainly, we all need to make sure that there is space and opportunity for us to respect and uplift and learn from people and figures like him in our past.”

“I don’t know that I would accept that there is this forced separation,” Gilchrist said. “Now with that said, there have been some people who’ve tried to drive that kind of rhetorical divide, and I think there we must always find every opportunity to ally our movements for justice, for inclusion, for representation, for progress and prosperity, for better health and education outcomes. I think that our struggles are inextricably linked in our culture, and we need to always work together to defeat them.”

As an experienced activist, Gilchrist was well-suited to success in politics. And as Gov. Whitmer’s second in command, it naturally follows that Gilchrist would advocate on behalf of the queer community. But he resisted singling out an equality-related initiative of which he’s most proud as part of this administration. He first mentioned his attendance at the signing of the executive order banning discrimination against LGBTQ+ state employees, as well as the signing at the Ruth Ellis Center to ban state funding for conversion therapy.

“I’m very proud of those actions taken alongside Governor Whitmer,” Gilchrist said. “But I think I’m most eager [for] the opportunity that we will have hopefully in the next legislative session to codify LGBTQ+ civil rights protections in the state’s Elliott-Larsen Civil Rights Act, something that now currently exists via a court decision, but it will be stronger via legislation.”

Gilchrist said he stands beside Michigan’s LGBTQ+ state legislators who have introduced changes to ELCRA session after session, only to be rebuffed by GOP leadership. “We have an opportunity to do something about that in the next legislative session, as we fight towards democratic majorities,” he said.

Michiganders have a stark choice at the top of the ticket next month. To ensure hate won’t win at the ballot box, Gilchrist said that can happen “by voting against homophobia and by voting for humanity. I think the choice could not be more clear this year.”

He said he hopes that LGBTQ+ people as well as allies register and vote. “The state is ready to go forward, and Gov. Gretchen Whitmer and I want to continue to do that, leading that way,” he said.