Michigan Senate Recognizes Pride Month for the First Time Ever

The Republican-controlled Michigan Senate, for the first time ever, recognized June as LGBTQ+ Pride Month by adopting a resolution that was the brainchild of openly gay State Sen. Jeremy Moss. The effort had bipartisan support. All 16 Democrats signed on as co-sponsors as did two Republican senators, Jim Stamas (R-Midland) and Wayne Schmidt (R-Traverse City).

“The people of Michigan understand, appreciate and value the cultural, civic and economic contributions of the LGBTQ communities to the greater community of the state and affirm a celebration of love, living authentically and accepting ourselves,” the resolution reads in part. 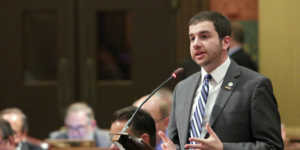 “We have a lot to celebrate as a community, especially a year after the historic Supreme Court ruling last June that upheld federal employment protections for the LGBTQ Americans,” Moss said in a statement. “We must also remember that Pride Month began not as a celebration but as a liberation against decades of harassment, embarrassment and discrimination that the LGBTQ community faced. There is work yet to be done and we must amend Michigan’s Elliott-Larsen Civil Rights act to include sexual orientation and gender identity among the existing protected classes.”

Moss, a first-time senator, introduced similar resolutions in 2019 and 2020 and the Senate failed to adopt either.

“I do hope that this statement today that LGTBQ lives are valid and contribute culturally, civically and economically to the state of Michigan is a sign of increased willingness to learn from our lived experiences even though they might not be your own,” Moss said on the Senate floor. “I appreciate this first step on that journey.”