Monkeypox in Michigan, Part 1 | The Patient: ‘People Treat Me Like I Have the Plague’

In an attempt to keep pace with the monkeypox virus spreading rapidly across the state, Pride Source is featuring a five-part series, Monkeypox in Michigan, by Ellen Shanna Knoppow.

Since the first probable case of monkeypox appeared in Michigan June 29, the LGBTQ+ community has been on alert: seeking answers—and vaccines. Declared a global health emergency July 23 by the World Health Organization and a national public health emergency Aug. 4, monkeypox is primarily spread through sexual contact by men who have sex with men, a group that includes people who identify as gay, bisexual, transgender and nonbinary.

Today, meet Ryan Abraham, who caught the monkeypox virus while traveling through Europe. When he showed up at an ER back in the states covered in painful lesions, Abraham was nearly turned away.

A rash, in the form of pimples, appeared on Ryan Abraham’s hands July 14. The 33-year-old former Michigander noticed them when he was at the airport in London, returning from a trip to Europe.

When Abraham spoke with Pride Source two-and-a-half weeks later, he was still enduring what had grown into painful lesions all over his body — a hallmark of the monkeypox virus (MPV). Abraham was recovering at home in isolation.

“I was in Berlin,” Abraham told Pride Source, “and about a week after I got there, a guy that I had met told me that he was in the hospital for monkeypox and he’s having a surgery on his penis to have a lesion removed or something. And I was like, ‘Oh God. OK, well, I don’t have any symptoms.’”

Abraham said he wasn’t nervous at that point. However, he quickly added that he would have been “immediately” proactive about treatment had he known then what he knows now. What he didn’t know then was that symptoms usually develop one to two weeks — or as much as three — after being exposed. Symptoms can last up to four weeks.

Abraham was likewise unaware the CDC recommends the vaccine be given within four days from the date of exposure for the best chance to prevent onset of the disease. And if given between four and 14 days after the date of exposure, vaccination may reduce the symptoms. Unknowingly, Abraham, whose trip to Europe spanned 40 days, went untreated for about a month.

According to the CDC, the monkeypox virus cannot be spread  until the onset of symptoms. The CDC website also says scientists are still researching whether it can be spread with no symptoms present. 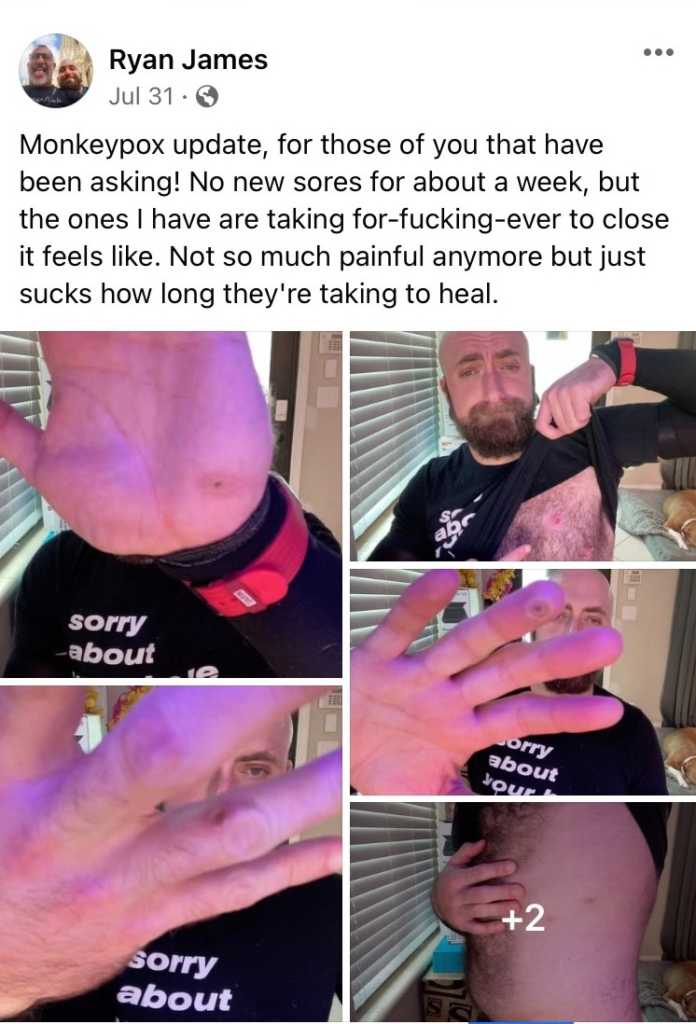 Finally persuaded by the friend with whom he had been traveling — and who had not contracted MPV — Abraham went to an emergency room. Until then, he said he had put it off, but after returning home, the pain became excruciating when doing as little as removing his shirt or bending in any place that had a lesion.

From the time Abraham sought treatment at the hospital to the time he actually received it, Abraham’s journey was a memorable one — but not for positive reasons. It began when he indicated the reason for his visit to the emergency room: monkeypox. At first, Abraham was unceremoniously turned away.

Perhaps the intake worker was moved by Abraham’s tears. He was sent to an isolation room. Next came the paperwork.

“The doctor tested me,” Abraham said. “He had to slice open one of the lesions and drain it and then said they tested that. And he told me that the test was a formality — that I definitely had it and he gave me a bunch of pain meds and told me that the health department will follow up with me.”

A friend told Abraham he should try to start antiviral medication as soon as possible. Tecovirimat, also known as TPOXX, was originally developed to treat smallpox. It can prevent the progression of MPV but has not been widely tested for treating MPV and is therefore difficult or cumbersome to obtain.

Abraham said in Florida, where he lives, there are a lot of hoops to jump through to receive the medication: Once the health department confirmed a positive test result and his own doctor ran various labs, the health department would issue a prescription, hand deliver the medication, discuss the drug and conduct contact tracing. Because his doctor’s office would not permit Abraham to enter the building, he had to have his blood drawn and provide a urine sample from his car.

Yet as eager as he was for relief, Abraham had fears about the “horse pills.” He had been told the use of antivirals to treat MPV was experimental.  There was no way to know how it would affect him. Abraham panicked. Still, he decided to take the risk.

“As soon as I started taking the meds,” Abraham said, “the lesions stopped appearing; no new ones showed up. I’m looking at my back, I’m looking at my arms and my chest right now. I’m still covered in wounds that are just taking forever to close. Because [the antivirals] don’t do anything to close them; they just stop new ones from happening.”

Between the isolation, pain and a lack of understanding shown by friends and family, Abraham is suffering emotionally, too. He described himself as “kind of a mess.” Friends offer to visit, then treat Abraham like he’s a leper or as if he has the plague. Or they’ll stand in the doorway with the door open while Abraham is clothed head to toe and wearing gloves, and after he disinfected his house with Lysol. He wonders whether they should visit at all. He said unintentionally, those kinds of interactions make him feel bad about himself: It creates additional stigma within a community that already is faced with stigma.

“People are just so unsure of it now,” Abraham said. His own family, who live outside Florida, has called Abraham “maybe once” since he was diagnosed. The day of this interview, they expected him to visit his grandmother who was hospitalized after a fall, not acknowledging that he needs to remain at home, isolating.

When Abraham started sharing his experience on social media, he was surprised by the overwhelming response. After receiving a text from someone that his posts inspired them to get vaccinated, Abraham knew he made the right choice to disclose publicly that he has monkeypox. He now posts updates on his condition.

“I got messages from people that were like, ‘I have monkeypox too, but I wish I was as brave as you are to talk about it,’” Abraham said. “And it’s like, I don’t really necessarily look at it as being brave. I didn’t ask for it. I didn’t do anything out of the ordinary to get it. And so I don’t really necessarily understand the stigma with it. And so if I can do even a little something to kind of negate some of that, then I feel like I’m doing the right thing.”

Tomorrow, visit Pride Source for part 2 of this series, Monkeypox in Michigan, for the viewpoint of the doctor who diagnosed the first case in the state.

Centers for Disease Control and Prevention