Monkeypox in Michigan: What You Need To Know Now

As the monkeypox virus spreads across Michigan, it’s important to sort fact from fiction. This guide includes helpful information about how the virus takes hold and spreads and links to evolving federal and state information and data related to the outbreak.

On Aug. 4, the CDC declared the quickly spreading virus a national public health emergency, a move that will free up federal resources that can be allocated for vaccination and treatment programs. Globally, more than 45,000 cases of monkeypox have been reported, including nearly 15,000 in the U.S. and, as of Aug. 15, 108 in Michigan.

Monkeypox is part of the same family of viruses as variola, which causes smallpox. Unlike smallpox, monkeypox is rarely fatal — in fact, it’s typically much milder. Monkeypox is not related to chickenpox.

The source of the disease is unknown (while monkeys could harbor the virus, we don’t actually have data to support monkeys as the original source). The name refers to the virus’s first discovery in 1958, when two outbreaks of a pox-like disease appeared in groups of monkeys used for medical research. The first human case of the virus was recorded in 1970.

What are the symptoms?

The CDC notes the following symptoms of monkeypox:

The rash goes through different stages before healing completely. The illness typically lasts two to four weeks. Sometimes, people get a rash first, followed by other symptoms. Others only experience a rash.

How is the virus spread?

According to the CDC, monkeypox spreads from person-to-person in several ways:

The CDC reports that monkeypox can be spread to other people from the time symptoms begin until the rash is fully healed (and a fresh layer of skin has formed). Symptom-free people cannot spread the virus to other people.

Scientists are not sure if monkeypox can spread through semen or vaginal fluids.

As Pride Source reported July 13, nearly everyone contracting monkeypox right now is gay, bisexual, or a man who has sex with men (MSM). “A recent report out of England showed that 151 out of 152 of the men interviewed with the disease were MSM. That doesn’t mean that the disease is “gay” or even that it is sexually transmitted — it means that the disease is spreading rapidly through our sexual networks,” wrote Pride Source reporter Trevor Hoppe.

This is a key distinction. It’s vitally important to push back against the narrative that monkeybox is a “gay” disease. Writing for the Washington Blade, Dr. N. Adam Brown notes, “Like we did at the beginning of the AIDS epidemic, we also have a media problem. In the early 1980s, the public was led to believe AIDS affected only men who had sex with men. That messaging, created stigma and fear associated with AIDS. The results were catastrophic.”

The article goes on to cite pediatric emergency medicine physician Vinay Kamaplath, who wrote in STAT News, “Pathogens don’t discriminate like humans do — they have no innate capability of discerning race, sexual orientation, religion, or nationality.” “Whether gay, straight, or bisexual, if you have close contact with someone with monkeypox, you’re at risk,” Brown continued. “Even so, it took the Center for Disease Control and Prevention until this month to update its guidance to state, “Anyone who has been in close contact with someone who has monkeypox can get the illness.”

Right now, the virus is more prevalent in some communities over others — notably, men and trans women who have sex with men. So, it’s critical to stay vigilant, but equally important to not add to the unfounded hype that this virus somehow targets this community. 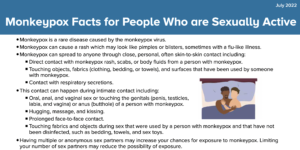 How serious is the virus?

Typical monkeypox cases last around two to four weeks and are relatively mild. Still, it’s not unusual to experience disruptive, uncomfortable flu-like symptoms on top of a significant full-body rash. Any time “pustules” are involved is a good time to practice caution — not only are these unsightly sores itchy and often, painful, scarring can be permanent.

Rarely, monkeypox causes severe symptoms requiring hospitalization. It’s a good idea to check in with your healthcare provider if you suspect you’ve contracted the virus.

How is monkeypox treated?

While the CDC notes that there are no current treatments available specifically for monkeypox, because monkeypox and smallpox are genetically similar viruses, some medications and vaccines developed against smallpox can be used to prevent and treat monkeypox.

Antivirals like tecovirimat (TPOXX) are sometimes recommended for people more likely to become seriously ill, such as those with weakened immune systems.

In most cases, the virus will resolve on its own within two to four weeks.

Where can I get a vaccine?

Currently, MDHHS is recommending vaccination in the following situations:

The CDC recommends the vaccine be given for PEP within four days from the date of exposure for the best chance to prevent onset of the disease. If given between four and 14 days after the date of exposure, vaccination may reduce the symptoms of disease but may not prevent MPV.

The state is receiving regular shipments of JYNNEOS vaccine, including doses allocated to hubs in the Southeast Michigan area in and around Detroit (including Be Well Medical Center in Berkley) and within Oakland and Washtenaw counties. Southeast Michigan clinics offering the vaccine include: 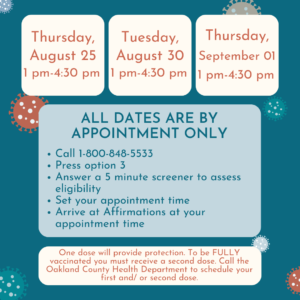