Coming out as LGBTQ as a high school student or earlier is rarely a simple affair with an almost built-in expectation of a period of exclusion after doing so. However, what’s not expected is for that exclusion to be present in one’s school curriculum. Kristalyn Musselman is lending a helping hand to her LGBTQ students as they face a unique set of hurdles in their educational journey, particularly in the realm of health education, and she has been recognized for that work. The Tecumseh high school teacher was recently chosen out of over 500 applicants as one of the 10 Michigan Regional Teachers of the Year for her efforts to improve the lives of marginalized students.
“When I found out about being selected to represent my region, I was completely shocked,” Musselman told BTL. “There are so many amazing educators in the state, and I almost didn’t believe that I was one of them. I had feelings of excitement and disbelief.”

“It’s important that sex education not simply focus on heterosexual relationships between cisgender people. These lessons must encourage and explain protection during sex for people of all identities while engaging in all kinds of sexual behavior.”
Kristalyn Musselman

Musselman, who teaches health and leadership at Tecumseh High School, was chosen in April to represent her region covering Lenawee, Hillsdale, Monroe, Jackson, Livingston and Washtenaw counties. It is especially fitting, perhaps, that Musselman was recognized for her inclusivity-focused approach as health education across the U.S. has been reported to be glaringly out of date.
According to a 2017 national study by nonprofit GLSEN, only 6.7 percent of LGBTQ students reported receiving inclusive sex education reflective of their identity. The same study found that just one tenth of LGBTQ students were enrolled in a school with official policies to support transgender and gender non-conforming students. It also found that that many such students don’t have access to LGBTQ-related topics in the school library, textbooks and other assigned readings.
While it’s certainly a long road ahead before an LGBTQ-inclusive curriculum becomes the norm, Musselman is actively fighting for that reality. Perhaps that stems from that fact that teaching has always been in Musselman’s blood. 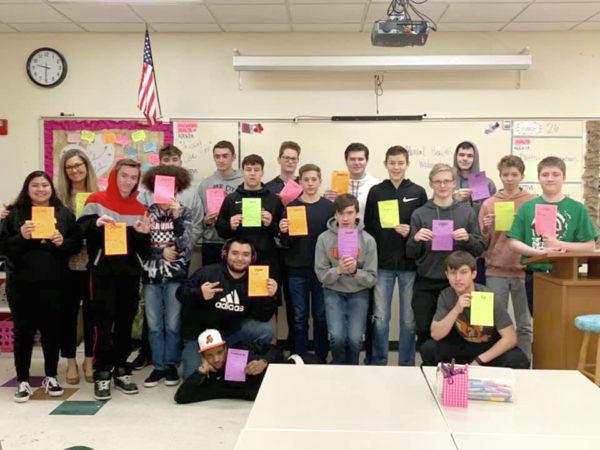 “Ever since I was young, I knew I wanted to be a teacher,” Musselman said. “My parents and grandparents were teachers and coaches, and I grew up helping my dad in his classroom and pretending to be a teacher.”
Following in the tradition of her family, Musselman attended Western Kentucky University on a softball scholarship where she earned her undergraduate degree in School Health Education. She was later prompted to continue her education after discovering her passion for special education in Michigan.
“I moved back to Michigan and began substitute teaching and realized that I also loved teaching Special Education,” she said. “I decided to get my master’s degree in special education and got a job at Tecumseh High School while I was working to finish that degree and certification.”
“I taught special education for students with learning disabilities for the first four years of my career, and then the Health position opened up and I moved into that position,” she said.
It wasn’t until Musselman joined the Sexual Health Initiative for Transformation as the group’s co-chair that she learned new and forward-thinking ways to create an inclusive classroom setting for LGBTQ students. The five-year initiative was purposed with improving adolescent health through exemplary sexual health education, improved access to sexual health services and the establishment of safe and supportive environments for students and staff.
“I was able to attend some amazing workshops and trainings that opened my eyes and made me realize how LGBT students are at a higher risk for a multitude of adverse health conditions, including depression and suicide,” Musselman said. “They are also more likely to be bullied and discriminated against.”
An inclusive health education class should provide information on gender identity, gender expression and sexual orientation with examples of LGBT relationships and families, Musselman said.
“It’s important that sex education not simply focus on heterosexual relationships between cisgender people,” she said. “These lessons must encourage and explain protection during sex for people of all identities while engaging in all kinds of sexual behavior.”
LGBTQ-inclusive sex education remains a divisive issue among school districts. In the Allendale, Michigan school district this year, leadership saw strong pushback from parents after a high school elective teacher discussed both sexual and gender identity with students.
News of the class lesson resulted in the formation of a parent group called Conservatives of Allendale Stand Together, who called for the elimination of LGBTQ issues in all classes in a 29-page letter to the school board. The group also asked that mentions of queer and transgender students in the school district’s anti-bullying campaign be taken away.
The letter states that LGBTQ issues “may have significant physical and mental health ramifications” and that including queer and trans kids in anti-bullying materials would increase discrimination against those who are not pro-LGBTQ.
For those in support of LGBTQ-inclusive sex education, it isn’t about pushing an agenda — it’s about protecting students. According to the Centers for Disease Control and Prevention in 2014, men who are having sex with other men accounted for 83 percent of primary and secondary syphilis cases. Such men often get other STDs, including chlamydia and gonorrhea infections.
The CDC also reported that these men are 17 times more likely to get anal cancer than heterosexual men and that men who are HIV-positive are at a higher risk of getting anal cancer. Meanwhile, lesbian and bisexual women are reported to get less routine care than other woman, including breast and cervical cancer screenings. Musselman said she has already seen the results of implementing an LGBTQ-friendly curriculum in her classroom.
“I have noticed that all students are becoming more comfortable asking questions in my class during sex education,” she said. “And I feel this increase in comfort level is due to an environment feeling more safe and welcoming.”
Moving forward, Musselman said there is still much more work to do in fostering an inclusive school environment.
“Creating a climate of culture and acceptance and empathy is an ongoing battle,” she said. “Schools need to provide training to their staff on the importance of creating an inclusive and safe environment within their classrooms. Teachers need tangible ideas that they can implement into their day to day classroom structure.”
She continued, “Before the workshops I attended, I truly had no idea how to support and include LGBT students … It just wasn’t on my radar. And I know that most other educators would feel the same way.”