Christopher J. Webb’s career in car design has a lot of miles and great memories

In his work as senior creative designer at General Motors Industrial Design, Christopher J. Webb draws on a childhood fascination for the engineering and elegance of automobiles.
“I used to call out the name, make and model of cars,” Webb recalled of his holiday drives to the English countryside with his parents. “I could even tell [the] brands at night from their headlamp and taillights.”
Born and raised in Bristol, England, Webb only recently became an American citizen after moving to Michigan 19 years ago to start his career at GM. A recruiter offered him an associate creative design position on the spot upon seeing his graduate show.
“I’ve always enjoyed design and been artistic,” Webb said, who studied fashion and textile design in with business studies in England at the University of Brighton.
“By sheer chance, we were told to do a project where we used non-traditional fashion fabrics. Just outside of Brighton is Caterham, home to the Caterham sports car, and I visited their facility for inspiration,” he said. “They generously gave me carbon fiber and glass fiber to make garments from and, jump forward to my final degree show, I was approached and offered a job by GM design recruiters.”
Over the span of his career, Webb has received the 2005 GM Chairman’s Honors Award for being on the team to streamline the exterior paint development process and an award for his support of the American Heart Association Gala. He has worked in color and trim designing, selecting the color and materials for concept cars, designing exterior car colors for production and concept vehicles as a colorist, and now to his current role: leading design for GM’s internal and media events.
“Probably the best and most simplistic way to describe our role is we work on all projects and products that surround and support the vehicle but not the actual vehicles themselves,” Webb said. “Growing up, I saw vehicles as a means to independence and a way to see all my friends, so they very quickly became significant in my life for that reason.”
The journey from collecting toy cars to designing cars as collectible toys has been a dream come true for Webb, and he credits his love of cars in helping to build a better understanding of what it means to be LGBTQ across communities.
“The industry in which one is working impacts dramatically how numerous, comfortable and visible their LGBTQ community is,” he said. “Like anyone who comes into an industry as ‘someone different,’ new fresh eyes can be a wonderful and sometimes scary and threatening thing.” 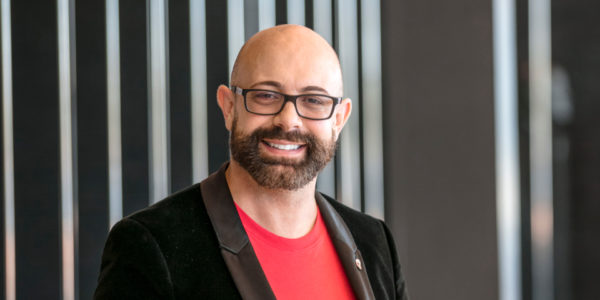 As a member of GM PLUS — the company’s LGBTQ & Ally Employee Resource Group for direct, contracted and retired employees of General Motors, its subsidiaries and affiliates — Webb said that he’s come to know a surprising number of LGBTQ people in the car industry.
“We are, of course, a small group in comparison to the other affinity groups at GM, but we thankfully have a visual presence and senior executive support.”
Beyond GM’s ERG, that support comes directly from the top in the form of GM’s chief diversity officer and first-ever female CEO, Mary Barra, Webb said.
“Of course fashion, interior design and the cosmetics industry have always been highly supportive and welcoming industries for us. [In] automotive, if you were LGBTQ you were mostly not out,” he said. “I personally feel that things have dramatically changed for the better for all diversity groups including all those [who are] LGBTQ. Diversity is so important and, in my opinion, if this company wants to have long-term success the people designing, building, marketing and selling our products should be as diverse as the customer they are serving and trying to connect with.”
Websites such as gaywheels.com have made a point to remind car brands that not only do LGBTQ people need cars, too, they also care about quality in design and engineering. Webb, whose first car at 16 was a bright green Mini Metro, has since refined his tastes to dreams of owning an Aston Martin.
“I love the balance of performance and handmade craftsmanship, and if it’s good enough for British Royalty then its good enough for me,” he said with a laugh. “If I could have any vehicle today, it would be a Cadillac Escalade if it were to be an SUV … A daily driver, I’m happy with my 2019 Cadillac XT4 Sport.”
Although Webb didn’t come from a family involved in the automotive field, “My father was a policeman, my mum a nurse and my sister is a science teacher,” he hopes the continued support of LGBTQ people in the industry will encourage others to take an interest in in it like he did.
“The numbers of openly LGBTQ employees has increased in this industry, and I am confident it is striving to be even more inclusionary as we move forward,” Webb said. “I can’t really say it’s a ‘gay thing’ or a ‘fashion design background thing,’ but the way I perceive and handle materials and colors is definitely different from the traditional automotive designer. I would like to think I have learned as much and have imparted to others over my time at GM.”
He added, “I feel the best is yet to come.”
But in the meantime, he’s enjoying the drive.