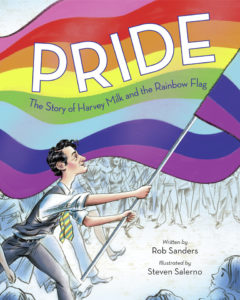 Pride season is here, and so are two new picture books that tell the story of the rainbow flag and the individuals who both inspired and created it.
“Rob Sanders’ Pride: The Story of Harvey Milk and the Rainbow Flag,” published by Random House, begins with Milk dreaming of equality as a young man and carrying those dreams forward as he becomes an elected official. When he organizes a march “to protest inequality and unfair laws,” he seeks something that people may carry to give them a sense of hope and community. He reaches out to artist Gilbert Baker, who envisions a rainbow flag and enlists volunteers to create it.
Sanders deals as gently as possible with Milk’s death, noting that he and San Francisco mayor George Moscone were assassinated by a man who did not think, feel or love like Harvey. He then explains that people continued to create the flags as a symbol of hope, pride and equality. A brief afterword and timeline give further details for those who want them.
My one quibble is that Sanders merely tells us, “Harvey dreamed that everyone – even gay people — would have equality,” without saying what being gay means. Parents and teachers who don’t already have that language will need to find it elsewhere (and “including gay people” might have been better than “even”).
The only other picture book about Milk, Kari Krakow’s 2001 “The Harvey Milk Story,” goes into more detail about Milk’s life and work, making it best for the older end of the picture book crowd. Sanders’ simpler version — more a snapshot than a full biography — and the inclusion of the colorful flag tale will appeal to slightly younger readers. So will the bright illustrations by Steven Salerno, showing the flag waving over crowds and being held by people of various gender identities, races and physical abilities. This inspiring, positive story is a great introduction to two LGBTQ heroes and to the spirit of the LGBTQ community. 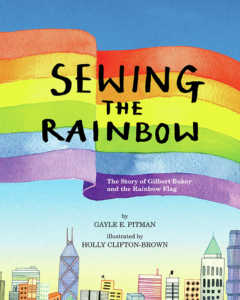 Gayle Pitman’s “Sewing the Rainbow,” published by Magination Press, looks at the same era through the life of Gilbert Baker. Pitman has already written several children’s books on LGBTQ history and culture, including Stonewall Book Award-winning “This Day In June,” about a Pride parade; “When You Look Out the Window,” about LGBTQ-rights pioneers Phyllis Lyon and Del Martin and “A Church for All,” about an LGBTQ-inclusive church. Her latest work shows us not only a key moment in queer history, but also the journey of a boy to becoming his true self. A few gaps in explanation, however, will require grown-ups to reference the reader’s note at the end.
“Sewing the Rainbow” starts in Gilbert’s dull Kansas hometown, where he “was full of color and sparkle and glitter.” He would watch his grandmother sew in her clothing store, while he drew pictures of gowns and costumes. Then one day, “his father took away his art supplies and tore up his drawings.” Pitman provides no reason for this, though, which may puzzle young readers.
Although Gilbert hoped to go someplace “filled with color” when he turned 18, he instead received a letter that “knocked every last bit of sparkle out of him.” Pitman doesn’t tell us what the letter said, however. On the next page, we simply read about his life in the army; adults will need to explain what a draft letter was.
Still, readers will feel almost as happy as Gilbert when he finally makes his way to San Francisco, learns to sew and creates costumes for famous singers, banners for (unspecified) marches and rallies, and “regalia for Mama José and her Imperial Court.” Even the reader’s note, however, doesn’t tell us what the Imperial Court (an LGBTQ charitable organization known for its fancy balls) is.
A more serious omission comes when Gilbert’s friend Harvey asks him for a new logo to replace a symbol that “continued to blemish” their city and “in Gilbert’s community, was a constant reminder of evil.” The text doesn’t say what the symbol was, however; some readers may think it was a logo of the city (the reader’s note explains that it was the pink triangle).
Additionally, nowhere in the story does Pitman use the words “gay,” “queer” or “LGBTQ,” although she does in the reader’s note. There is still much value in the broad message of acceptance and inclusion — but part of me feels this is like writing about Martin Luther King, Jr. without specifying that he fought for black people and racial equality.
Still, many young readers, especially LGBTQ children, will likely identify with Gilbert’s struggle to be himself. When Gilbert’s flags first fly over San Francisco, we can’t help cheering with the diverse crowd that celebrates them. And Pitman’s final message, that when one sees a rainbow flag, “you’ll know that it’s okay to be your colorful, sparkly, glittery self,” will inspire many, especially queer children with a more feminine gender expression. Illustrations by Holly Clifton-Brown are bright and whimsical, and the glittery rainbow cover adds to the book’s attraction.
Sanders’ tale is of heroes writ large, making public change with bold strokes. Pitman’s story intertwines both personal and public transformations. Both approaches will add to children’s understanding of these iconic figures and the time in which they lived — and our ongoing debt to them.
Let us hope they are followed by picture books — by these authors or others — about Mama José (José Sarria) and other people of color and of different genders who have also been fundamental to the LGBTQ rights movement.
Dana Rudolph is the founder and publisher of Mombian (mombian.com), a GLAAD Media Award-winning blog and resource directory for LGBTQ parents. Please join her on June 4 by posting on social media for #LGBTQFamiliesDay.

About the Author: Dana Rudolph

Dana Rudolph is the founder and publisher of Mombian (mombian.com), a GLAAD Media Award-winning blog and resource directory for LGBTQ parents. Please join her on June 4 by posting on social media for #LGBTQFamiliesDay.