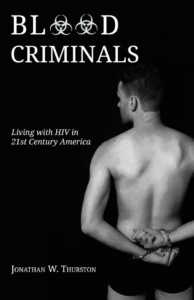 When HIV hit America in the ’80s it decimated LGBTQ communities and forever changed the course of national sex education. But what happened to the people who survived the epidemic? And what happens to people who are diagnosed today? In his new book, “Blood Criminals: Living with HIV in 21st Century America” ($13 from Weasel Press), author, activist and Between The Lines contributing writer Jonathan Thurston tracks the lives of six people in America as they deal with all the cultural problems associated with HIV/AIDS. Their stories include incomplete sex education; diagnosis without links to care; abuse from criminal and legal systems; dehumanization; and suicide “requests” from people online.
“’Blood Criminals’ is not my story though,” Thurston said. “It’s the culmination of over 100 interviews with doctors, pharmacists, lawyers, law enforcement officers, medical scientists, case managers, people living with HIV and people who’ve lost others to HIV. In this book, I track six people as they go from early sex education to their diagnosis, treatment, stigma and dating life. While I use these six major narratives as points of departure, I move on to show the structural issues each of these people are engaging with rather than lingering on these six lives.”
Thurston, who is open about being HIV-positive since 2016, studies English at Michigan State University.
“As my HIV helped to inspire the creation of this journalistic expose, I am very excited to see this book being released for World AIDS Day on Dec. 1 this year,” Thurston said. “A major part of my reason for writing and researching this book comes from a lack of serious journalistic work in 21st century on HIV. Everyone knows Randy Shilts’ book ‘And the Band Played On’ tracking the issues related to HIV in the ’80s. But no one has shown the cultural issues of HIV in the 2010s. No one has discussed in book form the exorbitant costs of the medications, the daily requests from others to kill yourself because of your disease or the prisons that will beat you into submission because they know you are subhuman. Not until now.
“In these pages, I show nurses in biohazard suits, people locked away for not disclosing their status — even if they did — and the loss of those the medical system failed,” Thurston continued. “When you have HIV, you lose personhood. When you have HIV, you are labeled a biohazard.”
While this is Thurston’s first book on HIV, it is not his first foray into writing or activism. Earlier this year he released a TED Talk called Being Positive. And, in addition to his work for BTL, Thurston was an editor for Lansing’s City Pulse. He has also given numerous talks about HIV at Vanderbilt University’s Out in Front conference.
To find out more about the book or purchase a copy visit gaybe.am/St.